The cast of Seussical Jr. gathers for a well-deserved curtain call. The production was funded in part by an HSLDA group grant, which is made possible by generous donors.

O your songs will be brilliant,
Your plays extra funny,
When HSLDA sets you up
With some bonus group money.

Call it an epiphany. Not until this spring, when 9th-grader Fiona Ladwig immersed herself in the role of a singing, dancing, sardonic marsupial, did she realize how thrilling it can be to go on stage.

For her acting debut, she portrayed the Sour Kangaroo in Seussical Jr., an adaptation of the full-length Broadway show. It was her homeschool group’s first-ever musical.

“It was a lot of fun,” Fiona recalled, explaining how her character helps move the plot forward by creating tension. In other words, she said, “I started all the trouble.”

Decades in the Making

According to one of the organizers of the production, Kelli Kruid, this chance for students to develop theatrical skills germinated 30 years ago, when a handful of Iowa families launched the PEACE Homeschool Group.

As the co-op grew, leaders augmented its academic offerings with extracurriculars such as sports and choir. 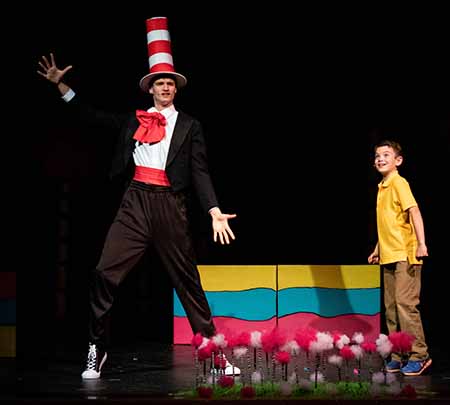 Homeschooled teen Kaden Kruid portrays The Cat in the Hat.

“It has really exploded in the last few years,” Kelli said. “We’ve really had parents get invested and tackle things themselves.”

She added that the group’s leadership got especially excited about expanding opportunities after hearing Darren Jones, HSLDA senior counsel and director of group services, speak at a leadership conference in 2021.

Afterward, parents brainstormed about what sort of new activity would involve students in a wide range of ages and help develop a broad set of talents.

Two clues came from an asset they already had—Fiona’s mom, Amanda Ladwig. She had been directing the group’s choir for two years and has experience as a professional actress.

“Kelli approached me last summer to ask me if it was even possible to do a musical,” Amanda said. Her response? “Absolutely, let’s give it a shot.” 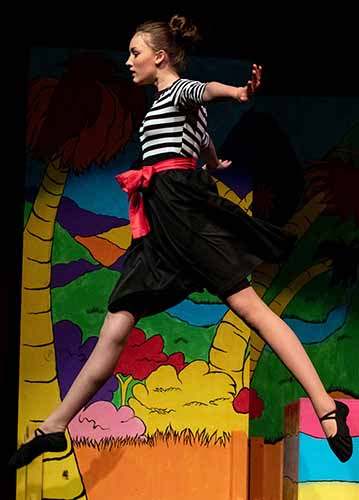 A student performs a dance step as part of the choreography.

Amanda added one caveat. They would need money for costumes, props, sets, and a decent venue.

A Little Help from a Friend

Fortunately, Darren Jones had already suggested a solution. The group could apply for a grant from HSLDA.

From that point it was simply a matter of picking a musical and putting the show together.

“We wanted a fun, vibrant, familiar story without a lot of drama,” Amanda explained.

They settled on a script that incorporates elements from some of the best-known works by children’s author Dr. Seuss, including The Cat in the Hat and Horton Hears a Who!

She said that working with various age groups at the same time provided several exciting advantages.

“I prefer it,” Amanda insisted. “You have built-in mentors. You have older kids that the younger ones can look up to and emulate. And by including those younger students, we’re also setting up success for years to come.”

Amanda and Kelli also agreed it was amazing to see so many parents help with off-stage show needs, from sewing costumes to raising additional funds and designing graphics for programs and playbills.

“I’m often surprised that when you step out on a huge project like this, the amount of parents who rally around you,” said Amanda. “There are gifts within the homeschool community we don’t often use.” She added that, in her experience, when you offer opportunities for parents to engage in activities involving their children, “they will just jump at the chance, and they love it.”

The kids loved it, too, playing to full houses for two performances.

Kelli’s teenage son, Kaden, portrayed Seuss’s iconic feline (the one with the towering hat), and three more of her kids participated in various roles.

“They were so sad when it was over,” Kelli said. “They ended up developing some great friendships.”

But there will be other chances to go on stage.

And thanks to the success of Seussical Jr., there’s already money in the bank for the next show. Plus, like any other homeschool group that meets the requirements, PEACE can apply for an additional HSLDA grant next spring.

Jones is excited about the continued growth in students and in PEACE’s community sparked by the grant. “Homeschool groups are a vital part of helping families continue to teach their children at home,” he noted. “One of the joys of my job is getting to advise group leaders on how to promote all kinds of enriching activities—from math to drama and art, field trips and sports, mentoring and advocacy. HSLDA is thrilled when we can help these organizations—and their members—thrive.”

HSLDA’s annual group grants are one of several funding opportunities made possible because of generous donors.