Kristin Boos (No. 7) celebrates with her DePaul University teammates. The junior ranked second on the team this year for scoring and assists.

Homeschool graduate Kristin Boos is moving toward her ultimate goal—earning a living playing and coaching the sport she loves.

Kristin just completed her third season as a member of DePaul University’s Division I soccer program. That means the junior has two more rounds of collegiate competition before announcing her eligibility for the professional ranks.

It’s a heady thought for an athlete who, before being recruited to play at the highest collegiate level, had never been part of a team representing a traditional school.

What Kristin did have growing up was a nurturing homeschool environment. She and her five siblings were encouraged to pursue what interested them, which naturally included their father’s favorite sport. 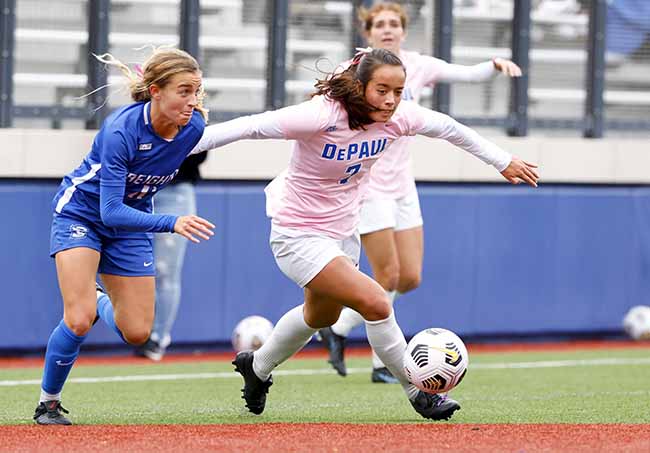 Kristin Boos drives the ball past a defender.

As Kristin’s mother Jennifer explained, her husband Tony developed a passion for the world’s most popular game during his childhood in the Philippines.

“My husband is a soccer fanatic,” she said. “He taught our kids to kick a ball as they were learning to walk.”

After participating in homeschool and club teams in the Detroit suburbs, where the family lives, two of Kristin’s brothers went on to play NAIA soccer for a small college.

“God has blessed them all, and they’re all good players,” Jennifer noted. But, she added, Kristin is especially skilled.

Her skills drew notice in high school as she piled up goals while playing for two different teams: Summit SC, whose members included other homeschooled students, competed with area public and private schools, and United FC, which played against other club teams and traveled to numerous tournaments.

Despite this success, Kristin said she didn’t realize the level to which she could aspire until she tried out for the US Youth Soccer’s Olympic Development Program. 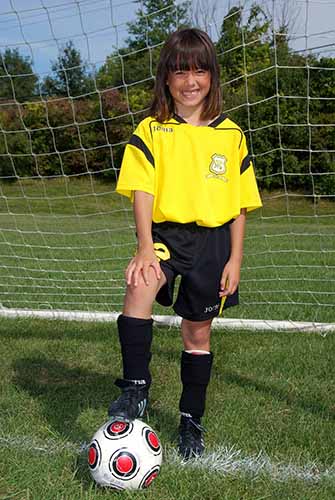 Like all of her siblings, Kristin got an early start playing soccer.

“I was able to compare myself to high-level players,” she recalled. “I got confident and started to get recruited.”

When it came time to pitch her skills to colleges, the fact that Kristin had no connection to a traditional school did lead to some interesting challenges. She and her mother formed a sort of marketing team, compiling video clips of Kristin’s highlights on the field, reaching out to recruiters via email and phone, and networking with coaches.

Preparing for college meant another novel experience for Kristin, seeing how her parents’ homeschooling philosophy focused on teaching students to be self-directed.

“The first test I ever took,” Kristin said, “was the ACT.”

When Kristin finally narrowed down her options and accepted a scholarship to play for DePaul, the deciding factors included its location in Chicago—a big city—and the fact that the coaching staff were all women.

She added that the built-in connection she felt through soccer helped her in the change to a new life and new place of learning, away from home. Her first course—the first she had ever taken in a formal classroom setting—was filled with other athletes who provided camaraderie.

“That transition was so great,” Kristin recalled. “I’m really extroverted. It was so exciting.”

Kristin added that her teammates have continued to provide great encouragement when it comes to academics. Like most of the soccer squad, for the past two years, Kristin has been named to their conference’s all-academic team for maintaining a grade-point average of at least 3.5.

She is majoring in art, and enjoys drawing and painting. But she admits, “I value soccer way more.”

And Kristin has certainly made her mark on the field.

There have been struggles though.

The 2020 season was cut short by COVID-19, and classes went online, which led to isolation. “I had to be self-motivated,” Kristin explained. “I think homeschooling has carried me a long way.”

Kristin has also had to recover from several injuries, including some that required surgery. Currently she is receiving treatment for a stress fracture in her legs.

She added that these difficulties have led her to reflect on what she learned as a homeschooled student—especially the importance of perseverance and of her Christian faith. She said that the confidence she gained through homeschooling has enabled her to have some great conversations about faith and beliefs with teammates and classmates.

Looking to the Future

Meanwhile, as she wraps up her junior year, Kristin is focusing on her goals for soccer next fall.

After that, this homeschooled grad just may find herself suiting up for a professional team in Europe or Australia, lining up shots from her favorite spot on the field, just beyond the goalie box.

Will My Teen Miss Out?