The vivacity and versatility of God’s green, growing things will never cease to amaze me. It’s a bit mind-boggling to me that one can start out with just a handful of seeds and wind up with a plentiful garden within just a few months, and I’m discovering more all the time just how many uses a single plant can have.

The particular case I have in mind is a tall, flowering herb called yarrow, which I planted in my garden last year. I picked it from a selection of random herb seeds purchased for an indoor plant-sprouting experiment I did with my kids. Yarrow was a plant I recognized from the wildflowers I used to identify in the fields and the roadsides when I was a teen, so I threw it into our experiment for fun, not really thinking it might have any practical value. 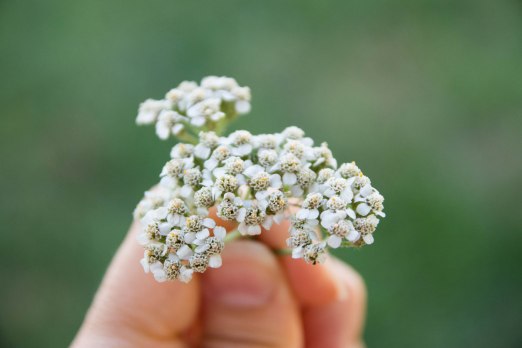 Our little experiment turned out to be quite successful—most of the seeds sprouted and grew quite well for a few weeks. Eventually, though, we began to forget watering the plants, and some of them outgrew their pots before it got warm enough to transfer them. For these reasons, the majority of them perished before they reached a permanent home. But the five little yarrow sprouts in the 15-oz. butter container survived, and, realizing that I’d better do something with them before they too met their demise, I hastily cleared a space in a garden bed for them to occupy until I figured out a better place to put them.

And occupy they did. I barely touched them for a month or so afterward, but given more space, they started growing like crazy. Eventually I moved them to a more permanent corner of the garden space, and there they grew to a height of about 3 feet and produced blooms everywhere last summer. I didn’t know what to do with them, so I just let them do their thing until they died off over the winter.

As a perennial plant, however, the yarrow got an early start this spring and quickly filled its little corner once again. In seemingly unrelated news, I began to develop an interest in essential oils, and in my research for remedies for a certain condition, one of the recommended oils was—you guessed it—yarrow. I was hesitant to purchase the fairly expensive oil, but I began to wonder whether the little plant in my garden had more practical uses than I realized. 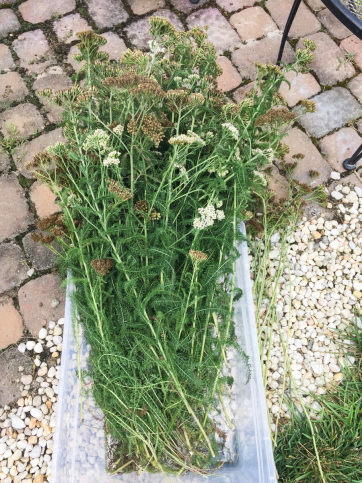 Indeed, it does! Not only can the leaves be used as an herb (tasting similar to tarragon) or as a hardy green in a salad or soup, but yarrow also has many medicinal uses as a powder, tea, tincture, etc. The powder has historically been used to stop bleeding (helping the blood to clot), earning it the nickname “soldier’s woundwort.” It is also called “nosebleed,” as a pinch of the fresh leaves placed in the nostril can apparently help remedy that condition as well. As a tea (which can be made from the flowers and/or the leaves), it is purported to help as a remedy for colds and fevers, having anti-bacterial and anti-inflammatory properties. It is also supposed to be effective for digestive issues, has a slight sedative effect useful for anxiety, and is said to help balance female hormones. (Note: not recommended during pregnancy or lactation.) The plant itself is also beneficial in the garden as it attracts pollinators and can apparently boost the quality of the soil. I have not yet tested most of these uses myself, other than using the fresh leaves for tea during a cold (it did seem to help a little!). But I finally got around to cutting down my miniature yarrow forest and drying the leaves and flowers for tea. (Sadly, many of the flowers were past their prime, but I was able to salvage a few.) The fresh tea wasn’t necessarily my favorite, but its pungent, slightly-piney flavor was not unpleasant, and I’m curious to see how it tastes now that it’s dried. The flowers smell quite a bit like chamomile (its botanical relative), so I’m interested to test the flower tea as well. Now the only missing ingredient is the tea ball I’ve been meaning to get for years! (I’m obviously new to loose-leaf tea.) 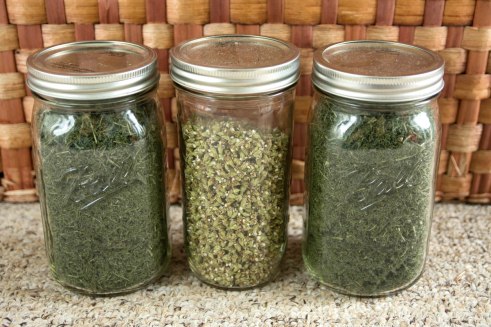 So what’s the moral of the story here? First, that the plants in God’s creation are pretty awesome at reproducing themselves. I did virtually nothing to this plant except water it on occasion, and it has thrived beautifully. Of course, that’s probably because it’s more or less considered a weed, but I still find it amazing that my healthy patch of yarrow started out as a few seeds in a butter container. Second, you never know what beneficial properties a plant might have! It amazes me to consider the resourcefulness of those who discovered different uses for plants back in the days when we didn’t all have ibuprofen in our medicine cabinets and the internet to unlock the forgotten benefits of the “weeds” in our backyard. Who knows? Maybe by taking time to identify the plants around us, we might discover more of these gems hiding in plain sight.