What does defending homeschool freedom look like? Sometimes it is lawyers and court rooms, sometimes it is testimony before legislatures. Sometimes it is a letter from HSLDA setting the record straight. But sometimes, it is 86 homeschool teens and their parents giving up a long weekend to help elect someone who will advocate for them in the US Senate.

That’s what happened the first weekend of November in North Carolina. A team of Generation Joshua volunteers embarked on an adventure that resulted in the election of homeschool dad Ted Budd.

The team boarded flights, piled into 15-passenger vans, and checked into hotel rooms to prepare for several days of intense campaigning. They were on a mission.

This unique view on the front lines of defending homeschool freedom is something I get to enjoy as the HSLDA Action PAC director. Not only do I interact with candidates and campaigns, getting to see their commitment to educational liberty firsthand, but I also have the privilege of organizing one-of-a-kind projects designed to advance homeschooling in the long term.

Let me explain: Generation Joshua is the youth outreach branch of HSLDA. In this hands-on program we come alongside parents to teach students about freedom and leadership. One of the most important things we do each year is organize our Student Action Teams in coordination with the HSLDA Action PAC. These Student Action Teams are what put the “action” in HSLDA Action! 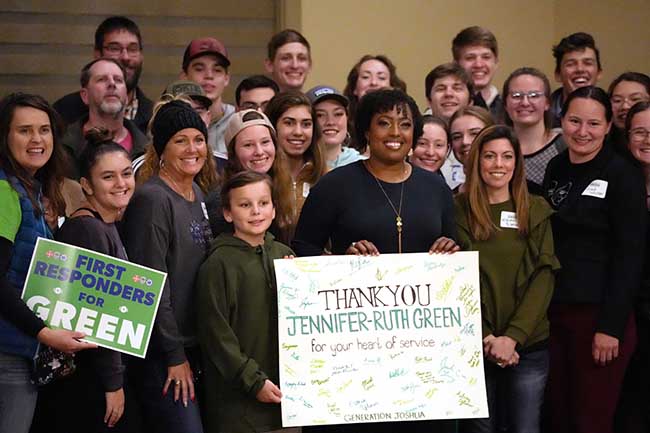 Jennifer-Ruth Green, a candidate in Indiana's 1st Congressional District race, thanks GenJ volunteers for their help during her campaign. GenJ volunteers helped candidates in six races around the country.

Homeschool volunteers sign up to go to some of the closest political races around the country—where they make a big difference.

All told, our 86 Generation Joshua volunteers knocked on doors, made phone calls, and volunteered at rallies. This work reached out to approximately 120,000 voters in North Carolina. (That is almost exactly the number of votes that Ted Budd won by.)

This victory is huge for homeschooling! But it’s only part of what we do to defend homeschool freedom.

The reality is that our Student Action Teams make a bigger impact by training hundreds of young people every year in what it means to be an involved citizen. We show them how they can make a difference in their democracy. We empower them with knowledge and experience. They learn that voting matters. They learn how to discern good and bad candidates. They discover hands-on the value of freedom and how it can be defended by average citizens.

GenJ trains teens to study various points of view and to winsomely engage in discussions on various issues. We help young people gain confidence in their ability to evaluate social and political concerns in order to determine the best course of action.

I like to say that leadership is like a muscle: it grows when you use it. Young volunteers test their leadership on these teams and come away stronger.

Here at HSLDA Action, we are investing in young people today so that freedom remains bright 20 or 40 years from now.

What does defending homeschool freedom look like? Well, to those 86 volunteers in North Carolina, it looked like giving up a weekend. Maybe that is one of the best investments they will ever make.