When Ethan Cartagena was 12 and just coming out of what he calls his “Lego phase,” he became enthralled with a book that described the very building blocks of the cosmos. It was all about the chemical elements and how they are organized for study into a periodic table.

Fast forward to 2020, and Ethan—now 16—is arranging a third annual symposium where students deliver presentations on their favorite scientific topics and professionals are invited to discuss careers in areas such as medicine and research.

The teen is planning the event in between taking advanced courses, mastering an unusual chess strategy, playing basketball, connecting with interesting people—and working toward his homeschool diploma.

Ethan’s parents, Ed and Deanne Cartagena, see their son’s penchant for doggedly pursuing his interests as an outcome of the homeschool program they established when Ethan was old enough for formal education. His brother, 11-year-old Caden, is homeschooled, too.

“It’s all they’ve ever known,” said Deanne. “They’ve never been part of an institution.”

But they have stayed busy learning—and networking.

It was Caden’s baseball coach who suggested The Elements by Theodore Gray, a book that captured Ethan’s imagination. From there, the young man started exploring how chemistry interconnects with biology.

“I’ve done a lot of research,” Ethan admitted. He’s even read papers in public journals, but added, “I would reach points where I wouldn’t know what to do.”

Thinking it made sense to go to the source for an explanation, he started emailing some of the authors whose papers he’d read. That’s how he started corresponding with a professor in England, as well as the German researcher Leopold Flohé, who is known for studying antioxidants and how they protect living cells from free radicals.

By the time Ethan reached middle school, he was eager to share the insights he’d acquired.

“We started to support him more on communicating what he was learning,” said Ed. So he introduced Ethan to tools such as PowerPoint—software for creating computer slide shows. Before long, Ed added, “he was putting presentations together and sharing them in our basement.” 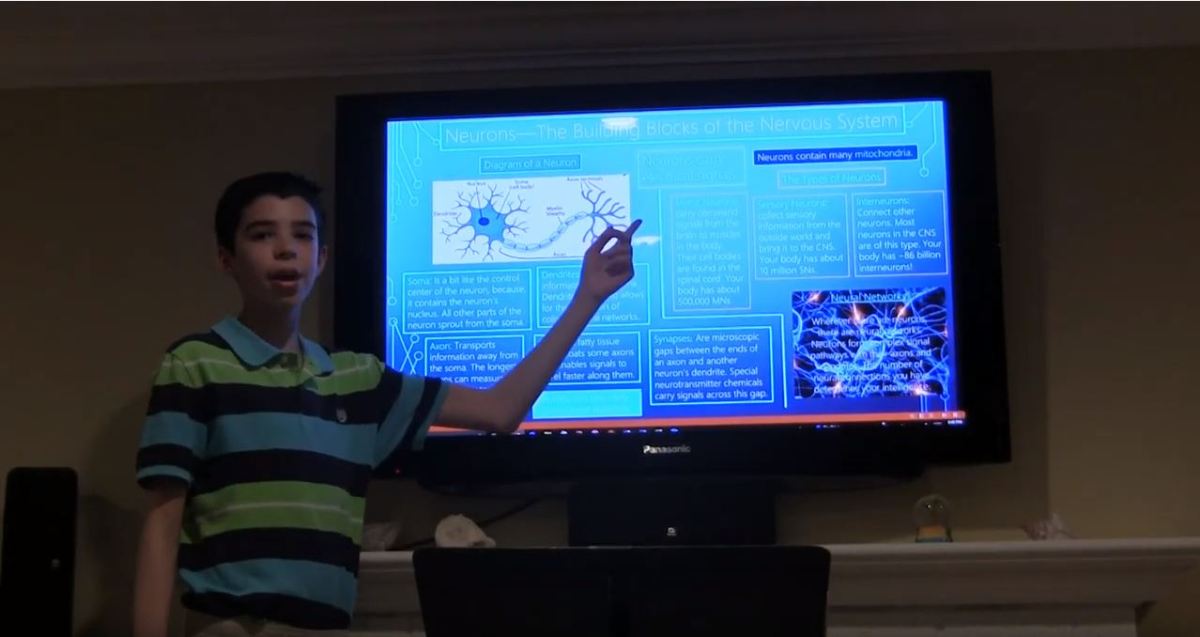 As Deanne explained, “he wanted to create a platform for other like-minded science enthusiasts.” The goal, she added, was to “communicate their knowledge to a live audience.”

So during his first year in high school, Ethan set up a website and started recruiting speakers for what he called the first Summer Science Symposium.

The 2018 inaugural event included four student presentations, as well as talks by a high school chemistry teacher, a local ophthalmologist, and the principal scientist for the biotechnology company Amgen.

Friends and family gathered at the Cartagena home near San Francisco on a balmy summer evening, popped popcorn, cozied up to the firepit, and heard students detail (among other things) early cancer detection using Fourier-transform infrared spectroscopy and increasing algae fat content for biofuels.

Then the adult presenters discussed their own career journeys.

Deanne said the informal setting seemed to encourage the professionals to assume the role of mentors.

“They are so open,” she said. “They want to share their experiences. They’re using their gifts to help others open their gifts.”

The next symposium in 2019 featured more student presentations and chats with two area physicians, a biology professor, and a scientist with the Guittard Chocolate Company. 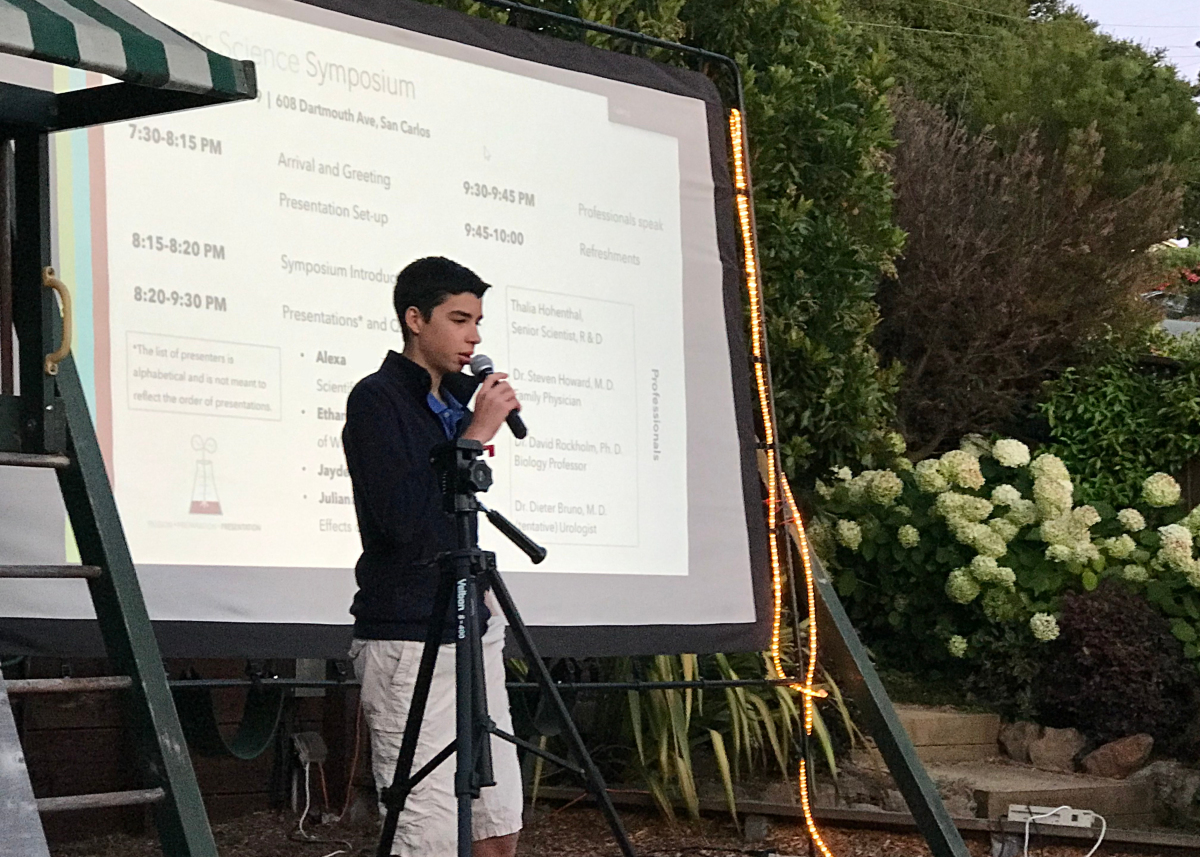 Ethan sharing the agenda for the 2019 Summer Science Symposium

Ethan said he is still making arrangements for the 2020 event, which, because of disruptions due to the COVID-19 pandemic, most likely will not be held in the Cartagenas’ back yard.

“We’re not going to cancel it, but we’re going to go virtual,” he explained.

The change should help Ethan reach out to a wider audience and give him the chance to employ new presentation skills. He’s already set up a website for his event and has tried his hand at videos explaining bio-chemical processes such as the hydrolysis of ATP (a means of providing energy to cells).

Since Caden is also interested in videography, Ethan said he hopes to tap his younger brother’s expertise to do more stop-motion animation and add three-dimensional molecular modeling to his videos. 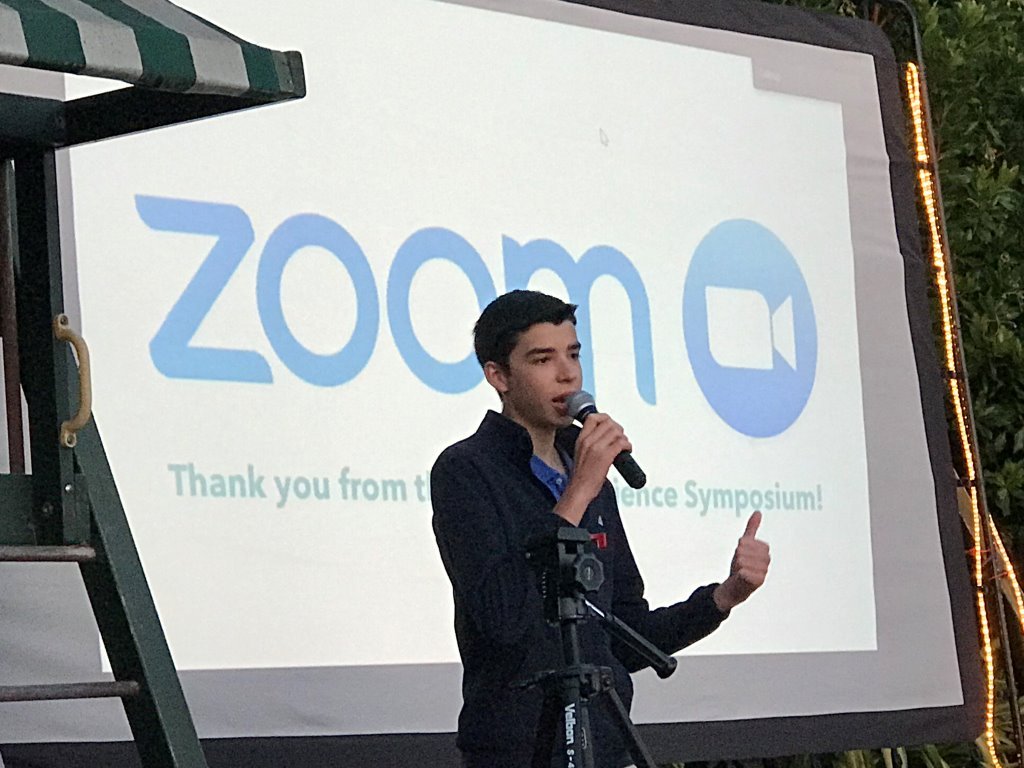 One more source of improvement Ethan said he plans to draw on is an advanced class he took through the American Society for Biochemistry and Molecular Biology about communicating more effectively to a lay audience.

Ed remarked that getting Ethan into the course seemed a remarkable accomplishment given that it is designed for post-secondary students.

“It’s really great how the Lord opened it up,” said Ed, explaining how the registration email asked Ethan (who is still in high school) to identify himself by selecting from among options that didn’t apply: undergraduate, graduate, post-doctoral. He chose “other.” Of all the students to be accepted into the course, added Ed, “I think he’s probably the youngest.”

Nevertheless, Ethan says he related well to his fellow students. Ultimately he was invited to serve as a facilitator.

“It was a great experience,” said Ethan.  “I learned a lot about the science of communication.”

For example, he explained, instead of dumbing down a complex process, an effective presenter will find an analogy that resonates with his listeners.  “You translate the jargon and put it in a way that the audience can understand it,” said Ethan.

And speaking of complexities, Ethan added that despite all he’s learned he’s still unsure what career to pursue. He hopes it will have something to do with science, partly because he feels the field presents its own intriguing aesthetic.

“I think it’s beautiful that in creation there’s always a deeper level to think about,” he said.

All he asks is that his work includes being able to tell others about the beauty he’s uncovered.

“God has a plan to guide me into something that combines research and communication,” Ethan concluded.