(Header image caption: Mr. Cole at Bel Air Middle School where he teaches with his kids Sarah, Luke, and Hannah.)

The whole thing started as family fun that also counted toward homeschool physical education credits. But since this summer, it has become a means through which the Cole siblings can compete for—and win—national honors.

Sarah Cole, 14, and her brother Luke, 12, returned from the Amateur Athletic Union (AAU) Junior Olympics in July, with medals declaring them outstanding athletes of the year for jump rope.

The award was based on the siblings’ overall performances in their respective age groups. Sarah also brought home gold medals in single-rope freestyle and Double-Dutch power events.

But Sarah admits that some people she knows still equate jumping rope with casual exercise. Until they see a demonstration, they miss the fact that the modern rendition of the schoolyard game requires copious amounts of dexterity and stamina. This is especially true for Double Dutch, in which two people turn two ropes while as many as four jumpers execute a carefully coordinated routine.

“Not everybody considers it a sport,” she said. “But when you show them a video, they’re impressed.”

Of course, the ability to impress judges and spectators did not develop immediately for the Coles.

Sarah and Luke have been training for several years, both at home and with the Hoppin’ Hawks, a jump-rope club active in their Maryland community. 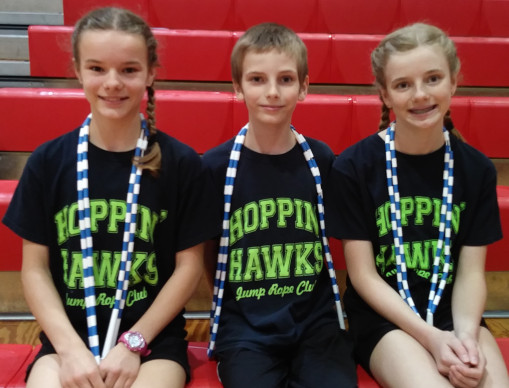 “The Hoppin’ Hawks did a performance for our church,” explained Sarah. “We joined after that. A couple months after I started, I realized I really like it.”

This time of year, the Coles usually practice with the group for two hours on Thursdays. From May through the summer competitions, practice increases to twice a week. 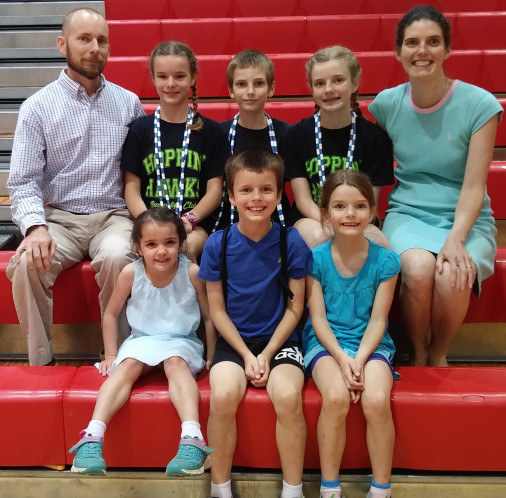 Cole Family when Luke, Sarah, and Hannah made the team.

Putting on a Show

However, being part of the Hoppin’ Hawks involves more than just training for competition. The group also has a performance team which gives jump-rope demonstrations.

“We do about five shows at schools every year,” said Luke.

The group also books performances for more high-profile venues. Recently the club did a show at Goldey-Beacom College in Delaware and participated in the Christmas parade in Aberdeen, Maryland. Among the more memorable performances in the Hoppin’ Hawks 25-year history are the half-time shows at a Baltimore Blast professional soccer game—and for the Harlem Globetrotters.

In the meantime, prepping for competition remains a focus.

Jeffrey Cole pointed out that his kids often train between classes and in the evening.

“One thing about homeschooling is that we can practice during school hours and with siblings,” said Luke.

The next big competition occurs in the spring, when the AAU sponsors regional events through which athletes can qualify for the Junior Olympics.

To earn better scores, said Sarah, she and her siblings will need to develop speed, power and more intricate routines. The former focuses on what are called double-unders—having the rope pass under your feet twice in a single jump.

“My personal best for double-unders in a competition was 142 in a minute,” recalled Sarah. Luke’s best is 137.

Designing more complicated routines, on the other hand, demands heightened coordination and timing. In Double Dutch, for example, highly skilled athletes can train to skip over the dual-rotating ropes by hopping on their feet and hands while in the push-up position.

“Only a couple of people can do that,” said Jeffrey. 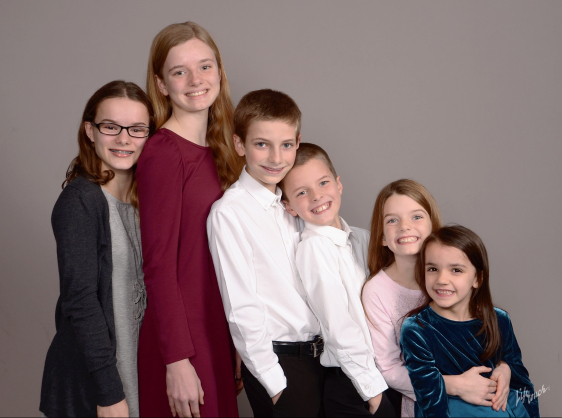 Cole Children when not hopping.

In addition to strength and skill, Sarah added, jumpers should remember one more thing that can make a positive impression on a judge.

“You have to smile and make it look like you’re having fun,” she said. “And yes, it is a lot fun.”

“One of the things we really like about it is that we do it as a whole family,” he said. “As homeschoolers, we’re always looking for things that keep us together.”

Which, of course, raises a question: Do mom and dad jump rope, too?

Luke provided a diplomatic answer. His mother Sarah Ann jumped rope in elementary school, he said, “so I’m sure she still has the talent.”