Above: Rosa Aristy uses manipulatives to illustrate math principles to young students. Her homeschool group is expanding to underserved communities in the Houston area.

For Rosa Aristy, learning should be as natural and vibrant as the discussions she and her family engaged in on the front porch of her childhood home in the Dominican Republic.

That’s why Rosa launched a new homeschool group in February 2021, aimed at making science, technology, engineering, arts, and mathematics (STEAM) courses available to underserved communities in her suburb of Houston.

Called Bridges to Science, the organization is intended to build on Katy Math Circle, a group for middle schoolers that Rosa started over three years ago, by adding hands-on instruction in computer coding and robotics.

The goal is simple.

“The role of Bridges to Science,” said Rosa, “is really to inspire students, to give them access to STEAM programs they wouldn’t otherwise have access to, and to make it fun. I think we can spark a fire.”

To reach this  straightforward goal, Rosa has had to navigate a number of obstacles—including those raised by the COVID-19 pandemic. But she drew inspiration from her childhood and expertise from local and national levels to keep moving forward.

Where It All Started

To begin with, Rosa’s interest in helping others learn grew out of her own love of learning—something that was instilled by her own parents.

Her father, an attorney, “was a voracious reader,” she said. He often assigned classical books for his children to enjoy during school breaks. He would read these titles as well, so they could discuss them during family porch times.

“My mom’s students would come over,” Rosa noted. These youths mingled with others who visited the family home for various reasons—including, for example, a math club hosted by her brother.

“They had fun just meeting out on the porch and working problems on a chalk board,” said Rosa.

After Rosa moved to the United States and married, she decided to homeschool in order to provide a personalized and creative learning experience for her own children.

Their family joined a homeschool co-op for elementary and middle school students. When some of the pupils reached upper grade levels, co-op leaders asked what subjects they were interested in pursuing the following year. 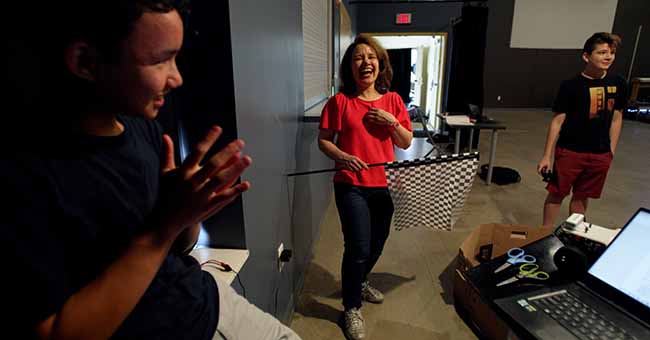 Rosa prepares to flag a winner during a robot competition.

The students’ consensus—robotics and computer coding—came as a bit of a shock. The topics went beyond the expertise of the adults involved in the group.

“I remember how some moms and I looked at each other, as if asking, ‘who’s going to teach those classes?’” recalled Rosa.

Ultimately, she knew she had to find a way to make it work.

“It touched my heart,” she said of the students’ enthusiasm. “When I see children who are curious and hungry to learn, I want to feed them. That’s one of the reasons why I homeschool.”

To lay the groundwork for the leap to more focused STEAM topics, Rosa helped form the Katy Math Circle in 2018. She reached out to local universities to find professors who were willing to present to students in the math group.

By the time she was ready to expand into coding and robotics, however, repercussions from COVID-19 presented new challenges.

The economic slump caused by the pandemic meant some families could no longer afford the nominal fee that Bridges to Science needed to charge. Rosa could also see that students in many Spanish-speaking families—whether they’d switched to homeschooling or not—lacked access to science and technology education.

To address these issues, Rosa knew she needed additional resources.

Fortunately, she got to know Karim Morato, a bilingual educational consultant and Hispanic outreach coordinator for HSLDA.

Karim remembers meeting Rosa during a Facebook live event hosted by HSLDA. Intrigued by Rosa’s achievements and goals, Karim reached out to schedule a time to talk further.

“It was supposed to be a half-hour call, and it ended up going two hours,” said Karim.

During the conversation, Karim outlined the various resources HSLDA has available for homeschool groups. She then connected Rosa with Darren Jones, HSLDA senior counsel and director of group services.

Karim said she is excited to see this positive outcome especially in light of her role of serving Spanish-speaking homeschoolers.

“Rosa is trying to cover an area where there’s a huge gap, especially among Hispanics,” Karim explained. “She has positioned herself in a really great way to connect these families with higher education. For me, to find a Hispanic mom who has this vision, and who is reaching out—I thought, what a unique opportunity! What can we do to empower this?”

Rosa said she’s encouraged as well because the grant is helping Bridges to Science expand to serve even more students. As pandemic restrictions ease, she hopes to add in-person events at a local library and school.

And she’s especially pleased that her robotics program alumni and her teenage son plan to be teaching assistants for the programming class.

“I always tell my students: You all need to pay it forward and be ambassadors for learning,” Rosa explained. “We’re getting there, and it’s exciting.”