Recent growth in homeschooling means that families who teach their kids at home now more closely reflect the nation’s diversity.

Although the description of homeschooling as primarily White and middle class may have been accurate in the distant past,1 more recent evidence suggests that it is largely obsolete because the homeschool population’s racial and income makeup is now much more varied.2 Here’s what some of the recent research indicates.

When the National Center for Education Statistics (NCES) reported the homeschool population demographics in 1999, 2003, 2007, 2012, and again in 2016, it was evident that, proportionately, White families often outnumbered families who came from other groups by almost two to one.3 For example, it can be seen in Table 1 that, compared to Black, Hispanic, Asian, and other families, the proportion of White homeschool families was often twice as large as the other groups. The exceptions were White and Hispanic families being essentially the same in 2016 and the percent of White families being smaller than those of other races in 2003 and 2007.

In contrast to these findings by the NCES, biweekly Household Pulse Surveys (HPS) conducted by the United States Census Bureau (USCB) showed that, by the spring of 2021, all of these groups educated their children at home in proportions that were roughly equivalent. 4 For example, as can be seen in the HPS column of Table 1, the percent of White homeschool households in the spring of 2021 was 20.4, but Black, Hispanic, Asian, and Other families were 18.3, 18.2, 15.1, and 19.2, respectively. The percentage of non-White homeschool families in 2021 is impressive: to reach these levels over the last several years, the percent of Black households had to increase by a factor of 9.6, Hispanic households by a factor of 5.3, Asian by 10.8, and Other by 7.1.

What makes these gains even more striking is the fact that they occurred alongside a simultaneous rapid increase in the percent of White homeschool families. Consequently, except in the case of Hispanic households—which were already involved in homeschooling as often as White families in 2016—the increased proportion of each non-White homeschool group has been very substantial. 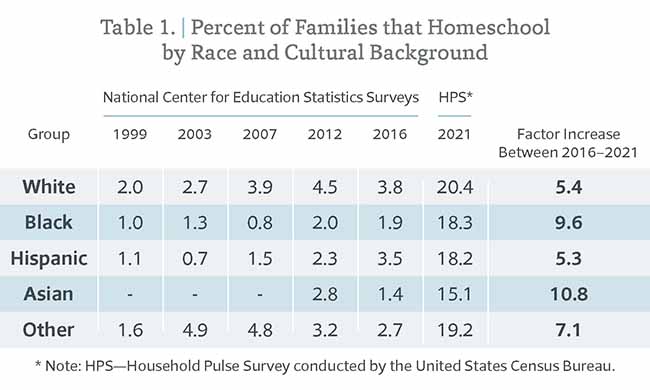 However, according to recent HPS surveys completed during the spring of 2021,6 this is no longer an accurate reflection of the homeschool population because equal proportions of families now come from all income brackets.7 For example, as shown in Table 2, four consecutive surveys by the USCB in the spring of 2021 indicated that an average of about 20 percent of US homeschool households had yearly incomes of less than $25,000, 17.8 percent experienced incomes between $25,000 and $34,999, 19.5 percent between $35,000 to 49,999, and so on. 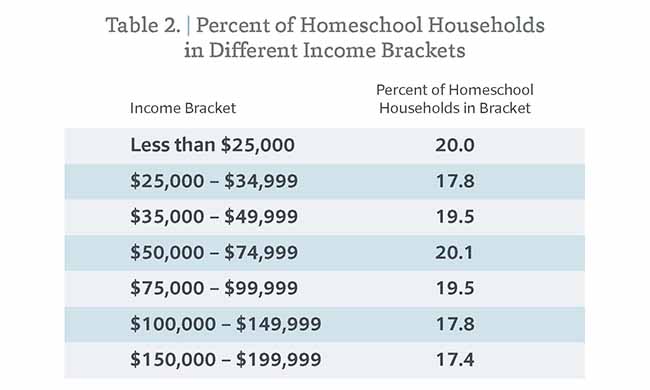 What these results suggest is that a roughly equivalent proportion of the households across all racial and cultural groups is now involved in homeschooling. In similar fashion, equal proportions of families across every income bracket are choosing to homeschool their children, too. Consequently, homeschooling is not just popular among a few segments of the US population but is now commonly practiced by families from different racial, cultural, and income backgrounds. In brief, home education has become more diverse than ever and, in doing so, has become a good reflection of the US population in general.

Dr. Steven Duvall brings extensive experience in both the public school and higher education arenas to his role at HSLDA. He is currently licensed or certified as a school psychologist in three states and has his PhD in developmental and child psychology.