Today as you homeschool your little kids, you are educating your teenagers of tomorrow.

During those needy, labor-intensive little-kid days, it’s hard to see the distant teenage years. In fact, thinking back on all that time and effort I put in—most of which my children don’t even remember now—I’m tempted to think that it wasn’t even worth the effort.

But of course it was worth it. I have teenagers now, and I can see how the early years shaped and prepared us for this stage.

Some benefits are obvious. For instance, I spent a cumulative total of years teaching my kids to read. Now, my youngest child can pick up The Extraordinary Adventures of Ordinary Boy by William Boniface and read a chapter by himself. My oldest child finished her National Novel Writing Month (NaNoWriMo) goal of writing 50,000 words in a month. My 16-year-old has discovered that he likes mystery short-story collections, and my 12-year-old is tearing through a fiction series about warrior cats.

And then there was the sorting, counting, adding, subtracting, multiplication tables, division. Numbers never thrilled me, and I got bored going over all the same concepts with each child. But when they turned 12 or 13 and I handed them over to Darren for middle-school math, they were all well-prepared to tackle the harder concepts.

Over the years, I read the same series of history books four times over. Science was also the same thing year after year—my elementary student and I studied plants, the water cycle, clouds, weather, and the types of rocks. I’m not sure my kids recollect most of those mornings with me, but they have a solid bank of knowledge as they pursue more detailed history studies and larger fields of science.

I knew I was working toward those goals during those years, and I plugged on consistently. But I was a little surprised to find out that it’s not just the academic foundation that my children are building on. Homeschooling isn’t just phonics and math; it involves a lot of relationship skills simply because we all spend so much time together. This is the area where I’m seeing fruit where I didn’t really expect it.

When the kids were small, Darren and I tried to strike a balance between requiring them to follow our instructions and also allowing them to express disagreement and resistance. Sometimes it was harrowing, working through the meltdowns and arguments. It would have been easier to demand unquestioning obedience. But what I’ve discovered is that those meltdowns and arguments don’t go away—they get bigger and more serious. Having practiced in those early years, our teenagers and I already had an idea of how to work through big emotions and come to a resolution.

On a related note, we allowed negotiation when our children were young. Ultimately, our answer was final; but we always gave them a little space to argue their side. Sometimes they even swayed us into changing our opinion. And I’ll be honest, I had a few voices in my life who warned me that my “leniency” would come back to bite me when I had teenagers. As it turns out, my tweens and teens have a good grasp of negotiation and compromise—even among each other. I don’t regret having engaged in those tedious, protracted discussions with a stubborn six-year-old. (But am I ever glad I’m past that.)

I still have a lot ahead of me, primarily the murky and uncertain process of launching my teenagers into adulthood. But I can look back on where I’ve been, and I can see where the efforts of my early years are still growing and blooming. 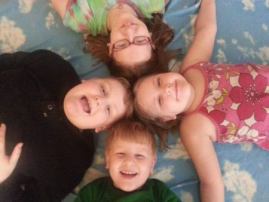 So, parents of little ones—keep it up. All those hours of repetition and consistent instruction are worth it. Not just for your little kids today, but for the teenagers they’ll be tomorrow.