In just a few weeks, 16-year-old Brogan McGrath will attempt to earn glory for his home state by representing South Dakota in a national chess tournament.

It’s a heady thought for the teen, considering how a year and a half ago, he didn’t even live in the Mount Rushmore State. Even more challenging, a vibrant youth chess organization didn’t exist near the McGrath’s new residence.

So how did Brogan earn this big break? Ask his mom, and she’ll tell you it’s all due to the power of home education.

“We have been homeschooling from the beginning,” said Jan McGrath, whose family hailed from California before their recent relocation.

Because her boys have been learning from home for so long, she explained, it was easy to continue their education even while adjusting to a new community and culture that was several states away from their former residence. Building out their schooling routine, of course, meant more than just focusing on academics. Their boys have also been able to stay involved with their chosen extracurriculars.

As Jan explained: “Homeschooling is so efficient that you have the time to pursue other interests.” 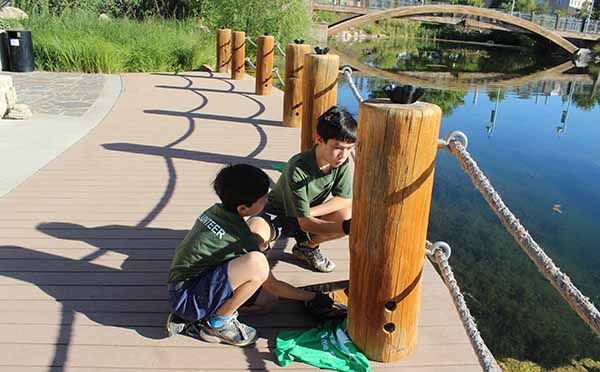 Brothers Brogan and John McGrath volunteer at a local park.

Some activities were easier to stay connected with than others. Brogan and his brother, 13-year-old John, found a venue for playing the piano at a local church the family attends. The siblings have also volunteered at a nature center, assisting docents with outdoor activities such as archery, canoeing, and kayaking. And Brogan has been a recognized debater.

When it came to finding opponents for regular face-to-face chess matches, however, Brogan encountered something of a challenge. A local club existed, but because of restrictions enacted to counter the coronavirus pandemic, participation had dwindled.

By simply plugging into area homeschool networks, said Jan, her family was able to help revive the group.

“Homeschooling is now mainstream,” she said. “You’re never on an island.” To boost opportunities for Brogan to participate in one of his favorite pastimes, Jan logged onto online homeschool support groups and posted a basic question: “Does anybody play chess?”

After being pointed to the local chess group and finding veteran chess players to lead and coach chess students, Jan jumped in as marketing coordinator and Brogan was asked to assume the role of club vice president. Plus Jan enlisted parents, many who home educated their chess students, to volunteer and help the scholastic chess club to grow.

Brogan’s responsibilities as vice president include presenting the membership with advanced chess moves, setting up chess boards for meetings, answering questions from younger participants, and lending books on how to be a better player.

The club now has about 30 members who meet most Mondays. 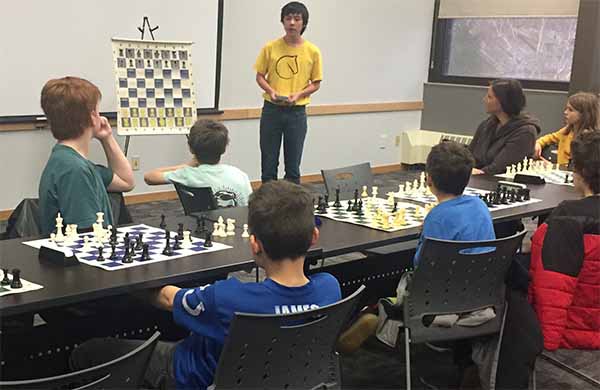 Brogan has also tapped into other ways to sharpen his chess skills. He plays against a computer program that not only provides a digital opponent, but can analyze his moves and offer advice after each match.

He reads chess books, watches tutorial videos, and looks for matches both online and locally for in-person chess play.

On one of the websites he uses, Brogan explained, “there’s a couple of thousand people playing at once. You just click a button and you’re playing with someone.” The site also allows participants to rate their own ability to be paired with suitable players.

To the Next Level

Brogan said his goal is to improve his ability to “visualize” the game.

“‘Visualizing’ is calculating in your head,” he explained. “You see the piece on the board, and you look ahead and imagine the results of your moves. It gets better with practice.”

Brogan’s hard work paid off when, late last year, he won the junior state championship for the South Dakota Chess Association. Additionally, the triumph of winning the South Dakota Chess Championships this past spring earned him a spot in the upcoming annual Arnold Denker Chess Tournament, where he will compete against representatives from all 50 states.

“They’re definitely going to be very good,” Brogan said of his prospective opponents. “It should be some of the best players in the country.”

Meanwhile, since the family’s move, Brogan’s younger brother has also renewed an entrepreneurial activity he started back in California—roasting and selling coffee beans.

At age 6, after noticing how much satisfaction his father Brian derived from brewing coffee of various kinds, John began pursuing his craft. 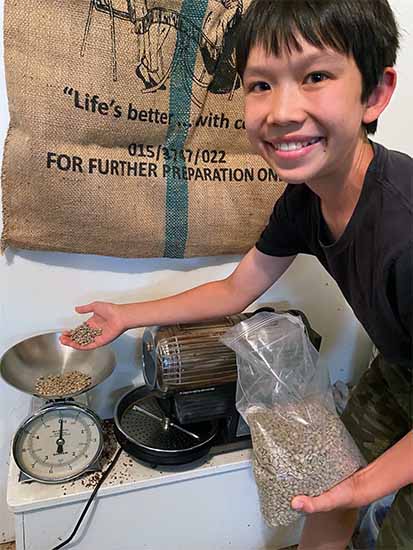 John measures another batch of coffee beans to be roasted.

“My dad likes to home roast, so the home roaster was already there,” John said. Though he has yet to develop a taste for coffee as a beverage, he soon discovered he enjoyed the process of turning a raw product into something profitable.

He does sample the finished product, however.

“I’ll taste the beans to make sure they’re fully done,” John said. “I do like the taste of them. It’s a rewarding feeling when you hit the eject button and the beans come out, and they smell really good.”

John advertises his product on his own website. He does his best to roast to order for his clients.

John said he’ll happily fill any other requests for beans, as long as homeschooling, piano playing, and volunteering don’t demand his attention first.

Jan said her sons’ attitudes testify to the flexibility of homeschooling—how it has helped her family pursue things they love without shortchanging academics. And if they do encounter a challenge, she feels confident she can connect with other homeschooling families to find a solution.

For example, when they all head to California for Brogan’s big chess tournament, Jan said she plans to use the trip to stock up on educational materials. She’ll simply go to an online homeschool forum and ask for bookstore recommendations.

“Homeschoolers are so resourceful,” she said.