In 2001, Ana Marcela’s daughter, Isabel, was born with truncus arteriosus—a congenital heart disease in which a single common blood vessel comes out of the heart (instead of both the main pulmonary artery and the aorta).

Back then, most of the children born with this condition in Costa Rica died, and if they survived, they still had to endure a life full of multiple surgical interventions and frequent hospitalizations.

Isabel had her first surgery in her sixth week of life.

“It was a miracle,” Ana Marcela said. “The surgery was carried out with a different technique that allowed her not to have another surgery until she was 9 years old. During this time, she was a normal girl. She went to school and led an extroverted life. She was happy.” 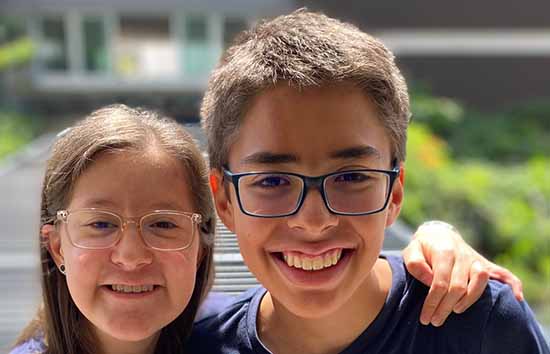 Isabel and Felipe's parents began homeschooling them in 2013.

After her second surgery at 9 years old, Isabel developed some memory loss and learning struggles. She forgot things, such as what she’d eaten and how she used to dress. Her ability to reason worsened and she developed specific learning difficulties at school.

“She wasn’t fully recovering from this second surgery,” Ana Marcela said. “Studying became very hard for her, so I realized she needed a different solution.”

“Suddenly, homeschooling became a real option for me, but I was afraid of embarking on this journey,” she continued. “However, I knew homeschooling’s flexibility would help if push came to shove. I could teach Isabel at home and attend to her needs if she had a medical emergency. ”

Ana Marcela and her husband, Mauricio, decided to homeschool their children mainly because of Isabel’s condition, but also because they wanted to educate them according to their family’s Christian values.

“I started homeschooling Isabel and her brother Felipe in 2013,” she said. “Felipe was 6 years old, and Isabel was 10. They were happy and excited. But I was terrified.”

“I remember crying when I received the curriculum,” she continued, laughing. “I kept asking myself: ‘How in the world will I do this?’”

The first homeschooling year was full of hardship and tears, as Ana Marcela struggled to adapt the curriculum to her children’s needs. However, they’ve continued homeschooling, and the process has been life-changing for their family.

“Watching my kids grow as closely as I have is priceless", Ana Marcela said. “I know some mothers don’t have the luxury of connecting with their kids. For me, this was a beautiful gift and privilege.”

Ana Marcela and Mauricio are particularly glad their kids grew up in a warm and safe environment, without feeling too pressured and insecure.

“They are self-confident and do not compare themselves with others in a harmful way,” she said. "They try not to engage in negative competition, and whenever they can, they act as conflict mediators.”

“When I couldn’t count on anyone, these women were the ones that supported and encouraged me,” she said.

As one of the first homeschoolers in Costa Rica, Ana Marcela is ready to guide and encourage other Costa Rican homeschooling families seeking help.

Ana Marcela is currently fighting for the government to recognize her daughter’s high school diploma. Since Isabel graduated in September 2021, she hasn’t been allowed to enroll in a university in her own country.

Nevertheless, Isabel is still thriving. Her diploma is recognized as valid in the United States, and she was just admitted to Palm Beach Atlantic University's Global Leadership degree, which prepares Spanish speakers throughout the Americas with a quality education in ministry.

Although Isabel has found other career options outside Costa Rica, Ana Marcela knows she must keep fighting to pave the way for homeschool freedom to exist in her country. She only wishes to find more homeschoolers willing to fight for it as well.

When Isabel was struggling to learn after her second surgery, Ana Marcela began doing research on different learning methods that helped children develop their reading and writing skills. She even completed certification in a brain training program to learn more about it and use it for her kids.

After noticing the educational improvement of Isabel and Felipe, Ana Marcela and Mauricio opened a personalized learning skills training center called BrainGym in Costa Rica, where they use the Glifing method—a digital training program that helps children with reading speed and comprehension, academic performance, and self-esteem.

Most of her clients are private school moms with children with learning struggles looking for an alternative that might work.

“BrainGym lets me support them,” she shared.

One of her dreams is for BrainGym to gain more recognition: “During the pandemic, about 450,000 students in Costa Rica didn’t have real access to a full education program. This made the gap between public and private schools even wider. There is a great deficit in basic reading and writing. My dream is for BrainGym to solve the root of this problem in my country.”

Ana Marcela’s story is truly inspiring. She not only overcame the challenges of homeschooling two children—one of them with a medical condition—but also found her vocation in fighting for homeschool freedom and the improvement of Costa Rica’s education.

Note: If you know of Spanish-speaking homeschooling families that need encouragement, please share this article with them!

Photo Credit: Photos throughout are courtesy of the family.

Looking for homeschooling encouragement in Spanish?

Sign up to HSLDA's Spanish Update to receive news, stories, tips, and updates in Spanish.

Alicia Leal studied Law and Philosophy in Monterrey, Mexico. She writes and edits English and Spanish content for HSLDA.