Although it may have been accurate in the past to state that homeschooling was carried out by proportionately more White American families than other census categories,1 evidence gathered over the last two years suggests that this notion has become largely obsolete. Here’s what some of the recent research indicates.

When the National Center for Education Statistics (NCES) reported on the homeschool population demographics between 1999 and 2016,2 it was evident that, proportionately, White families almost always outnumbered families who came from other census categories. For example, it can be seen in Table 1 that, compared to Black, Hispanic, Asian, and Other families, the proportion of White homeschool families between 1999 and 2016 was, with few exceptions, typically twice as large as the other categories. Exceptions occurred in 2003 and 2007 when the percent of White families was smaller than those of Other Races and again in 2016 when White and Hispanic families homeschooled at roughly the same rate.

In contrast, recent Household Pulse Surveys (HPS) administered by the US Census Bureau showed that homeschool demographics have, for two consecutive years, undergone significant changes. For example, in Table 1, the 2021 data shows that roughly equivalent proportions of White, Black, Asian, and Hispanic family households with school age children taught at least one of their children at home in 2021.3 The highest rate of homeschooling that year was found among families that identified as “Other Race.” In 2022, similar proportions for White, Black, Asian, and Hispanic homeschool households occurred again. As in 2021, those households that identified as “Other Race” represented the largest homeschool group in 2022 (see Table 1 column entitled 2022).4 Consequently, it seems likely that a large shift in homeschool racial and cultural demographics has taken place since 2016. The fact that these increases have occurred two years in a row suggests that the changes may be permanent.

From racial and cultural perspectives, the homeschool population is becoming more diverse and representative of the US school-age population than ever before—particularly since the onset of the pandemic. Although disproportionately high numbers of White families homeschooled their children compared to families from other racial and cultural groups in the past, HPS results indicate that the 2022 rate of homeschooling is quite similar among White, Black, Asian, and Hispanic households. The exception is the rate for “Other Race” homeschool households because it is higher (i.e., 13.7 percent compared to 9.9, 10.3, 8.01, and 8.9 for White, Black, Asian, Hispanic, respectively) than any of the other census categories. When compared to 2016, the rates changes that have occurred in 2021 and 2022 may reflect permanent changes in homeschool demographics that, in turn, may indicate that home education has become, and will remain, more diverse than ever. 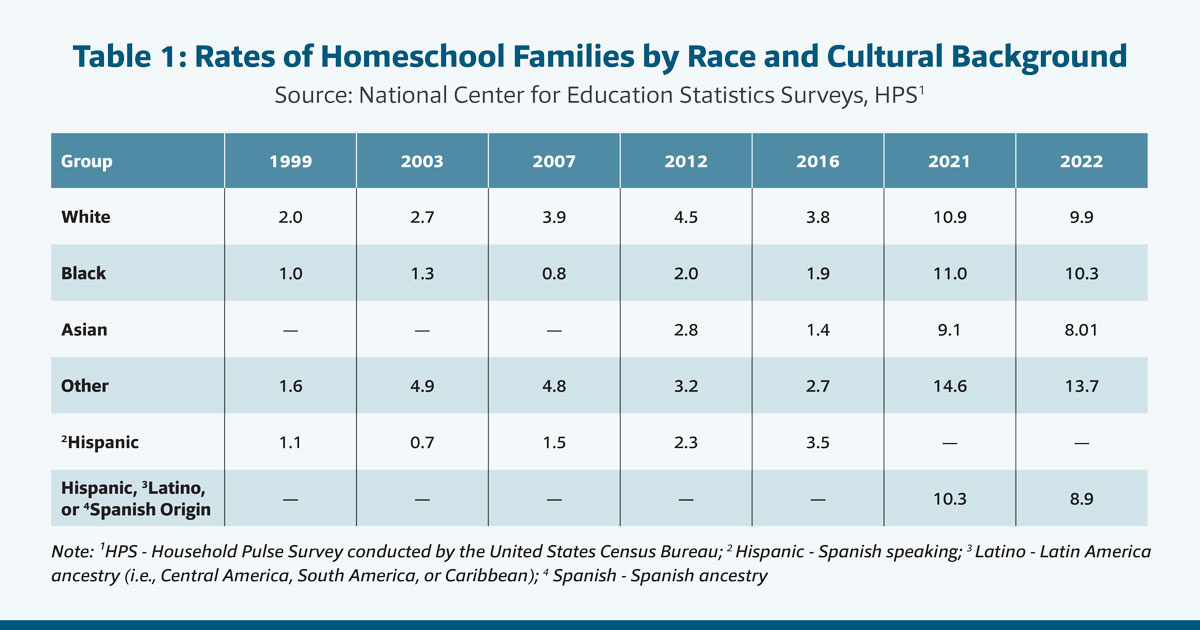 Dr. Steven Duvall brings extensive experience in both the public school and higher education arenas to his role at HSLDA. He is currently licensed or certified as a school psychologist in three states and has his PhD in developmental and child psychology.