When she and her husband started homeschooling in the 1990s, Kate determined this life choice for her family would not deter her from exercising her own gifts, and eventually she began writing a column on home education for the Washington Times called “Homeschooling Today.”

Through connections with fellow homeschoolers in the Washington, DC area and pursuing hands-on educational opportunities for her children, over the years, Kate found herself involved in one artistic project after another.

With her three children grown and homeschooling their own kids, Kate recruited the whole family to help with what may be her most ambitious project yet. Kate and her clan aim to promote learning, self-expression, and global unity through a film about dance.

“It was really an extension of how we homeschool,” said Kate’s oldest daughter, Lan Tsubata Lee, who directed Dancing Joy.

It was also a major undertaking. The film features 21 dance troupes performing in the United States and in 10 other countries. Kate, Lan, and two camera operators traveled 56,000 miles over a span of three months to record these performances, which are set to Beethoven’s Ninth Symphony and its renowned “Ode to Joy.” 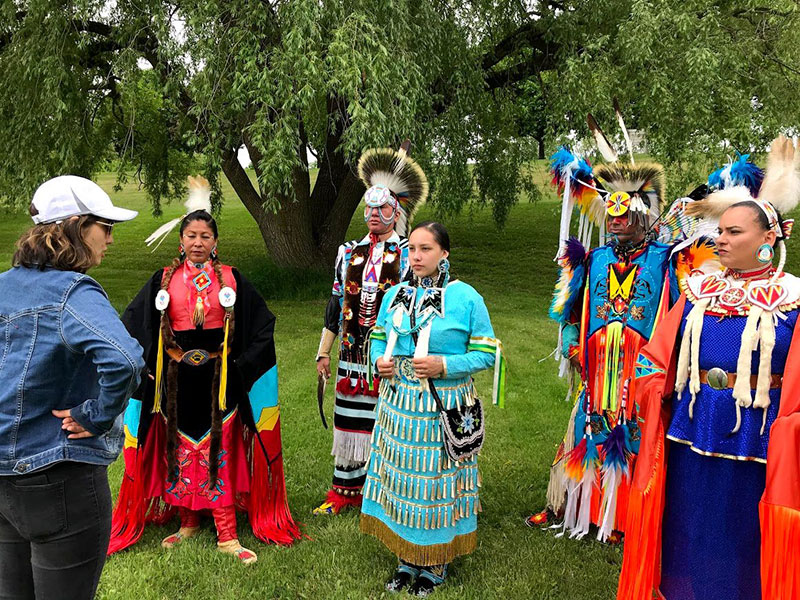 All of these efforts, said Kate, arose from the creativity and entrepreneurial ethic that the family cultivated through years of homeschooling.

“The way we were homeschooled,” Mie recalled, “it was very much getting out there and doing things. That’s how we learned. We threw ourselves into the process. I think it opened up a world of possibilities.”

In developing adult careers, the three siblings built on their formal training and personal interests. Mie and her husband began their own production company. Kensei became an IT professional. Lan pursued dance and choreography, as well as event coordination.

In fact, it was an incident stemming from one of Lan’s dancing activities that inspired the idea for the film.

It happened in Israel, Kate recalled, while touring with a troupe that uses performing arts to promote AIDS prevention and awareness. Lan and other members of the group began interacting with fellow schoolkids gathered in a parking lot near a tourist site, which led to an impromptu performance.

Some Druze youth responded by launching into a simple folk dance. 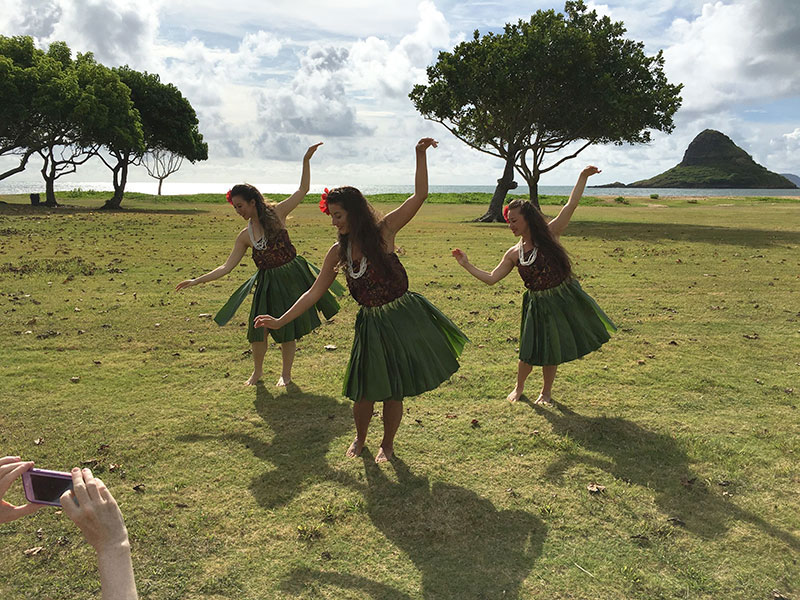 A trio performs a traditional Hawaiian dance on location.

“Every single person in the parking lot joined in,” said Kate. “People from different countries—they were all invited to perform. While I was watching this, I thought, ‘This is what peace looks like. You’re not arguing, you’re enjoying each other.’”

Which led to another thought: “How can I share this?”

Once the idea for Dancing Joy was realized, Kate’s team began by reaching out to embassies in Washington. They explained they were looking for dance forms representing various cultures. Filming the performances they arranged took them from Northern Ireland to Nepal, with a few jaunts into the southern hemisphere.

They also chose to stage the dance scenes outdoors as much as possible.

“We wanted to bring viewers into the location and make them feel like they know the people and the terrain,” explained Kate.

While filming in Fiji, recalled Lan, a few of the fire dancers inadvertently set some shrubbery ablaze. 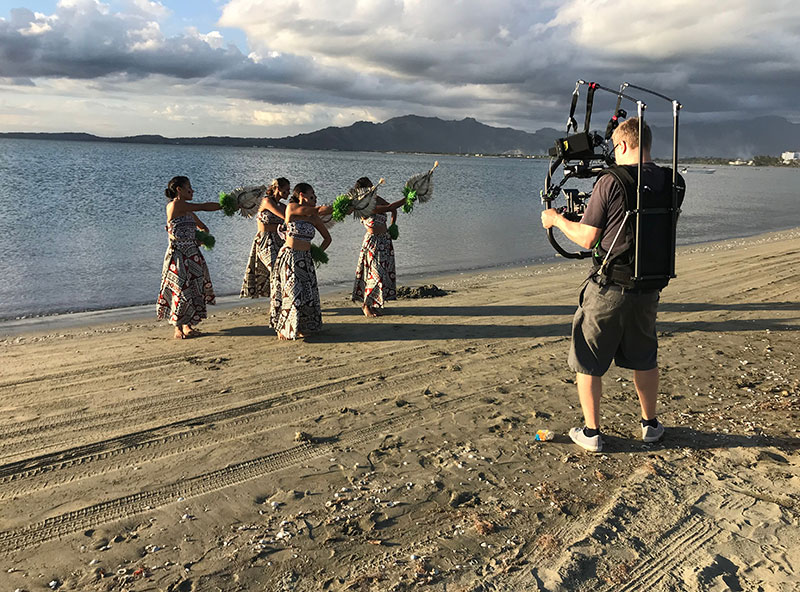 The film crew sets up a shot featuring Fijian dancers.

In Botswana, after having completed the scheduled shooting, someone suggested the dancers climb a nearby ridge in order to be photographed against a dramatic sunset.

The climb was exhausting and a little unnerving, Lan said, as “we had to shake sticks to keep the black mambas away.”

The resulting photos ended up being worth the effort, said Kate. Seeing the line of dancers imprinted against the African sun, their upraised arms mimicking the dark limbs of nearby trees, Kate said she realized they’d captured a key visual motif.

“I got these shivers and thought, this is the image for the entire movie,” recalled Kate. “It couldn’t have been planned. We truly felt God was involved.”

In fact, the scene ended up being used in promotional material for the film.

All the globe-trotting adventures and arduous production work did not occur in a vacuum. Kate pointed out that she and her crew relied heavily on the support of Capital Area Christian Homeschool Group—a co-op her family connected with early on in their home education journey.

The group provided a wide range of help, from childcare, to meals for the cast and crew, to financial aid, to just plain encouragement. 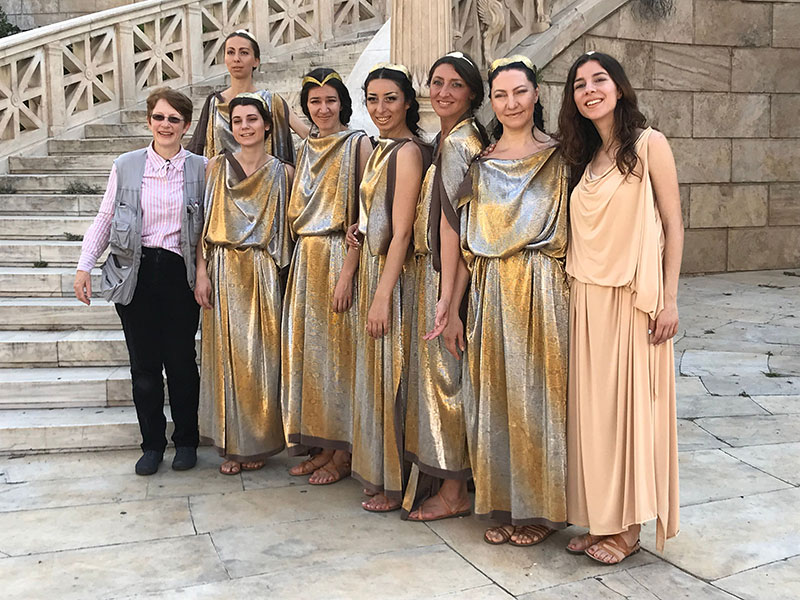 A Greek troupe pose for a group shot after filming.

Charlene said that helping with the film felt especially gratifying, considering her original goal for the co-op was not simply to provide classes but also to build an enriching community.

“It not only supported the students,” she explained, “it supported everyone in the family. Everyone should be able to learn and grow. Mom and dads have dreams, too.”

Viewed in this light, Charlene added, the group’s work on such an ambitious project became an opportunity for projecting their values beyond the homeschooling world.

“It’s a tremendous model for our children,” she said. As far as she’s concerned, it shows them, “you can do hard things. You can do big things.”

Though their film won accolades when they first screened it on the festival circuit, her family had to reassess their plans when the COVID-19 pandemic closed down most cinemas.

“We had to question what our purpose was,” recalled Kate. “Was it to earn awards, or to bring a gift to the world?”

She said the answer came from the film’s overarching theme: “We wanted to get back to the core of what dance is, which is an expression of joy.”

To that end, Kate’s family has made Dancing Joy available for purchase and streaming on various sites, such as Amazon and Vimeo.

They are also considering ways to present the film via nonprofits and education groups.

Ultimately, added Kate: “We would like for it to become a family classic—the film that people watch for their special day, their holiday. To remind them of why they love each other."

Homeschoolers can receive a 20% discount on purchases of the movie, Dancing Joy.  Go to joydancemovie.com/store, then type "hslda" in the promo code area when checking out.