According to the great American educator Booker T. Washington, success shouldn’t be judged by the position a person has attained, but by the obstacles he or she has overcome.

By that measure, Rebecca Willis and her son with autism, Caleb, have achieved a great deal of success.

What may seem like humble career beginnings to some represents a major triumph for Caleb. Only 12 years ago, he was a distracted, easily overwhelmed boy who struggled to interact even with his own family.

Now, in his current position at Home Depot, Caleb has already forged friendships and earned positions of trust.

For Rebecca, trying to teach through his early years was a constant battle.

Caleb couldn’t concentrate or sit still. He found any unusual sights and sounds overwhelming. He began carrying a blanket so he could hide under it if anything unnerved him—including being looked at directly by anyone. The noise of a lawn mower being operated outside was enough to make him cry.

Even though Rebecca was already homeschooling her older daughter, she started to doubt her ability to succeed with Caleb. This anxiety intensified when relatives and friends insisted she simply needed to be more disciplined.

Caleb began undergoing twice-daily sessions aimed at improving his sensory perception. The therapy often involved him lying on his back while either moving his limbs or having them manipulated. The object was to adjust his mind to sensations created by his body moving in certain ways, or for him to be more aware of the positioning of his extremities even if he couldn’t see them.

“It really helped with his behavior,” says Rebecca, because he was no longer overwhelmed by external stimuli.

Three years of this laid the groundwork for other specialized training. Caleb underwent several years of occupational therapy, as well as instruction on how to regulate his emotions. He also continued homeschooling using an informal curriculum—for several years, he even had a private tutor.

On the Path to Work

At age 14, Caleb began participating in Hidden Wings, a ministry based near Santa Barbara, California, that focuses on developing young adults with autism. Its stated goal is simple yet profound: “A job and a friend for everyone with autism.”

One highlight, he says, was when “I noticed a dolphin swimming around my kayak.”

By age 17, Caleb was ready to move on. Rebecca recalled how Caleb had spent several summers walking door-to-door, asking neighbors for lawn-mowing jobs. On the advice of his psychologist, Rebecca graduated him and sent him to look for work.

Caleb had no objections. 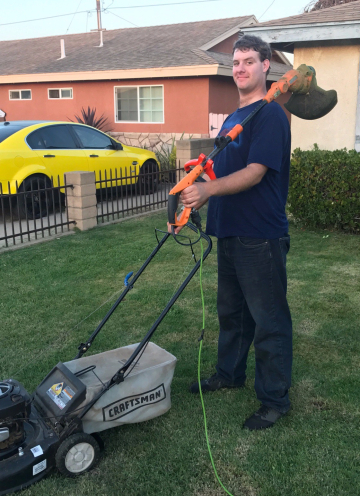 “I’ve always been a hard worker,” he says. “My mom can vouch for that.”

Through Achievement House a non-profit based in Paso Robles, California, Caleb participated in landscape and gardening vocational training. After three years, he was told he was ready for a job in the community.

His vocational coach helped Caleb compile a resume and practice for interviews. This effort paid off when Caleb was hired at Home Depot, where he specializes as a lot tech. 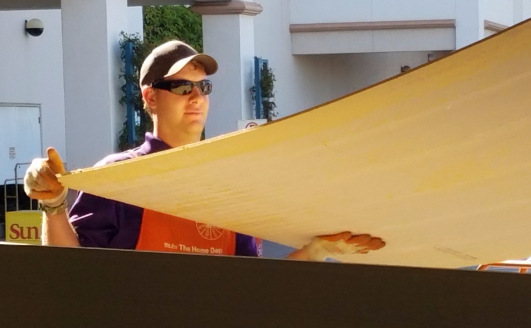 His hard work earned him a raise and Associate of the Month honors after a short time on the job. Though he is elated at his successes, he admits what he likes most is “all the great people I work with.”

On October 19, Caleb is scheduled to be recognized for his success at a disability awareness event organized by the state Department of Rehabilitation.

Another area where Rebecca has been impressed with Caleb’s growth is as a participant in church.

According to Caleb, his faith has become central to all he does. He is still motivated by the central theme of a sermon he heard some time ago: “Don’t let the circumstances you’re going through define who you are.”

He has a good friend at church, and plays the conga drums in the praise band. “And,” Caleb adds, “I don’t mind people looking at me anymore.”

For Caleb’s success, Rebecca credits the educational approach that allowed her family to find unconventional ways to help Caleb grow.

“God is so good,” she wrote in an email to HSLDA. “Caleb has exceeded every expectation that the medical community told me to hope for. I know that homeschooling kept us from the bureaucracy and institutional mentality that would have stunted Caleb’s success. I’m so thankful!”