Above: Evan Erickson works on a project at home. The teen studied the electrical properties of LEDs, capacitors, and switches to prepare for an international physics competition this summer.

Homeschooled student Evan Erickson has become one of the most accomplished teens on the planet when it comes to physics and math.

In July, the 17-year-old from Minnesota won a gold medal at the 51st International Physics Olympiad, where he competed as part of a five-member team representing the United States.

Evan’s mother, Rena, who has homeschooled her five children over the course of  23 years, admits she’s excited by Evan’s achievement and his moment of renown. She’s quick to add that she and her husband Dan encourage all their children to develop their full potential and to celebrate one another’s triumphs.

“We don’t compete with each other,” Rena said. “Everybody is everybody else’s cheerleader.”

Reminiscing, she described how the family became aware of  Evan’s seemingly innate aptitude for math.

According to family lore, Evan first exhibited advanced ability in the subject when he was 8. He heard his three older brothers complaining about having to do long division, so in order to understand the basis for their lament, he simply learned the mathematical process on his own. 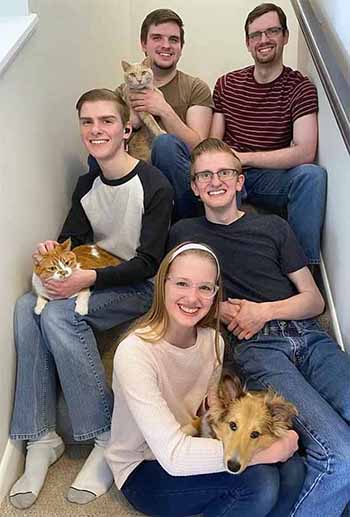 Evan and his siblings Alec, Ian, Adam, and Lily.

“He was so excited—he thought he had invented it,” Rena recalled with a laugh.

She added: “In fifth grade, he walked out of his bedroom and said, ‘I don’t why people make such a big deal about calculus. I went on Khan Academy and figured it out.’”

Evan’s parents, of course, structured their homeschool program to accommodate their son’s interests and unique abilities.

But for the most part, said Evan, once he had mastered the fundamentals of math, he did a good deal of studying on his own.

“If there was a problem that I liked, I would just work on it,” he explained.

By middle school, Evan was involved in an interscholastic math team, competing, coaching, and mentoring. For the past several years, he has participated in the Minnesota State High School Mathematics League, sponsored by Augsburg University, along with public school and private school teens. He placed fifth in the league this year and was recently named captain of the all-state math team.

Last summer, his love of math prompted him to help launch a project aimed at helping students whose opportunities had been curtailed by the COVID-19 pandemic. 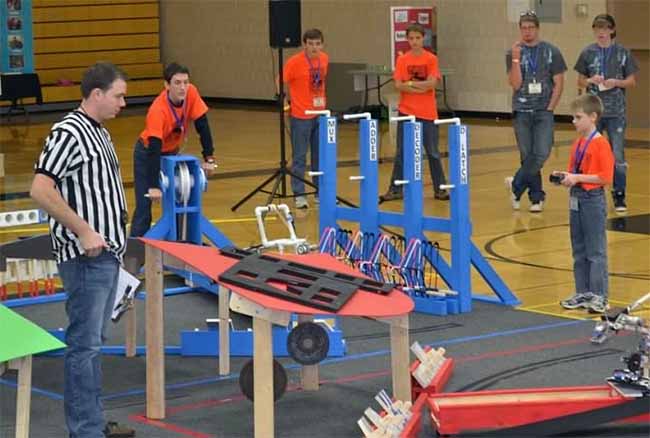 A young Evan takes part in a robotics competition.

“A friend shot me a text, saying a lot of lockdowns are happening and it might be a good time to do an online math camp,” said Evan.

The two of them set up a website, wrote lecture slides and worksheets, and promoted their venture through various groups.

“We had over a hundred [campers] sign up,” Evan reported.

But when spring and summer 2021 arrived, Evan found himself engaged in preparing for the intellectual rigors of the physics olympiad.

Evan qualified for the US Physics Team by being one of the top scorers among thousands of high school students who took two exams administered by the American Association of Physics Teachers and the American Institute of Physics.

He then prepared for the international competition by looking at theoretical problems presented in past olympiads and conducting hands-on experiments to evaluate the electrical properties of LEDs, capacitors, and switches.

Sometimes he trained with fellow teammates, which Rena considered a bonus because it allowed Evan a rare chance to delve into his favorite topics to a degree he doesn’t always get to do as a busy teen with a full schedule and numerous talents.

Rena said she and her husband have always encouraged their children to pursue a variety of interests and focus on their responsibilities to others.

Evan, for example, “has had a job since he turned 11,” said Rena. “He started as a paper boy and now is a manager at an ice cream shop.” He also plays the oboe and enjoys boardgames.

So even though her son is highly intelligent, she added, “he’s very relatable.” She attributes that to Evan’s spending lots of time around people with all kinds of interests and abilities.

Rena said it made her happy to see Evan train for the physics competition, for many reasons, including because “this was a good experience to be around people who know what he knows.”

The event itself was scheduled to be held in Vilnius, Lithuania, but because of the pandemic, it was staged online. More than 400 students from 76 countries competed in timed exams on topics including thermodynamics, seismic waves, and wave-particle duality.

“You basically had to be really smart for five hours,” said Evan.

Students who scored in the top 8 percent were awarded gold medals.

Evan confessed to being slightly disappointed that students were not permitted to attend the competition in person, though he added that the Lithuanian hosts arranged online activities to promote a sense of global interaction.

For example, said Evan, “I was on a trivia team with the Netherlands and Norway.”

Evan said he hopes to make the US Physics Team again and actually go to the next olympiad in Belarus.

Meanwhile, he will concentrate on finishing high school and getting into the Massachusetts Institute of Technology in order to study more physics.

Ironically, that probably means he will have to retake the ACT. He racked up a perfect score on the exam when he took it in the 9th grade, but he has since been told colleges will want to see results that are less than two years old.

Until Evan leaves home, however, he will likely also keep fulfilling a crucial role for family board game time.

As Rena explained: “We just give Evan the directions and let him figure them out.”