Gabbie Young, far right, participates in an interview for local television as part of her fundraising for Alzheimer's research.

When 14-year-old Gabbie Young says that she loves being homeschooled, part of the reason is because it allows her to spend so much time with her father.

For nearly half her young life, Gabbie has been laboring in hopes of forestalling the day when her father, Dennis Young, might no longer be capable of dressing himself, speaking, or even recognizing his family.

These debilities are typical of the late stages of a disease doctors first detected in Dennis when he was in his 40s—early onset Alzheimer’s.

Gabbie was barely school age when she first noticed changes in her dad’s ability to remember and think clearly. Her mother, Valeria Young, did her best to explain to Gabbie what was causing these symptoms.

An added concern was the fact that Gabbie’s grandmother and great-grandmother also suffered from a progressive loss of memory and other cognitive skills, which leads the Youngs to believe that Dennis’s illness is hereditary.

At about age 7, Gabbie asked if there was any way to cure or reverse Alzheimer’s. Valeria replied that there was little anyone could do, to which Gabbie interjected: “Why not?”

Determined to Make a Difference

That’s how the fundraising dynamo now known as Team Gabbie came to be. That year, Gabbie opened a lemonade stand and raised $500, which she mailed to the Alzheimer’s Association to support medical research. 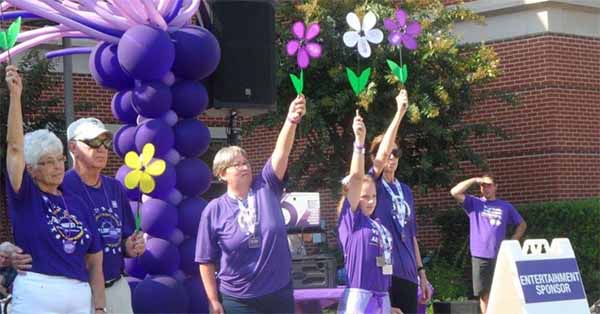 Gabbie hoists flowers with her fundraising team. Her white flower represents the hope that one day a cure will be found for Alzheimer’s.

Since then she has gone on to organize all sorts of charity events to benefit the same cause. She’s sold valentines and Easter eggs, staged yard sales, and collected pledges for the annual Walk to End Alzheimer’s.

In addition, Gabbie has become something of a spokesperson for the fight against Alzheimer’s. She has been interviewed by media outlets that serve the area of Arkansas, where her family lives. Officials at the Alzheimer’s Association have also recruited Gabbie several times to speak to elected officials to help raise awareness about the disease.

Meanwhile, Gabbie and her family have contended with life’s daily struggles.

As Valeria explained, not too long ago, she and Dennis agreed for safety reasons that he should no longer work. For years he struggled to continue his career, at first giving up his office job for hands-on tasks. He even employed various memory aids, such as keeping copious handwritten notes.

“He tried, until the last day he could, to put food on the table,” Valeria said. 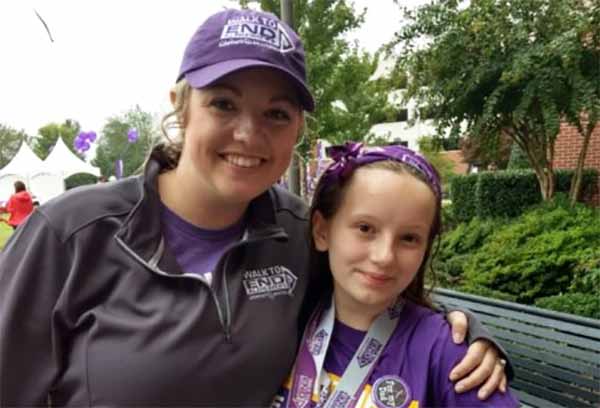 Gabbie poses with one of her mentors, Carly Dethlefs of the Alzheimer's Association—Arkansas Chapter.

But once he reached the point where he couldn’t recall how to drive from his home to the local grocery store, they knew it was time for a life change.

Now, Dennis stays close to home, doing chores and helping homeschool in the one subject his mind remains keen on.

“He’s still good at teaching the Bible,” recounted Valeria. “He teaches us things that are way above our heads.”

All things considered, said Gabbie, “my dad is doing pretty well.” Again, thanks to being homeschooled, she has been able to develop a special relationship with him.

Homeschooling Keeps Them Together

In fact, homeschooling has remained an important constant for Valeria and her four daughters as they have coped with a series of hardships.

Valeria recounted how she began homeschooling shortly before her first husband died.

Her desire to convey to her girls the things that matter to her most, plus the way homeschooling helped her family bond, inspired Valeria to stick with the educational method even after becoming a widow in her 20s—before she married Dennis. And for several years she received scholarships through Home School Legal Defense Association.

For all these reasons, declared Valeria, homeschooling “is non-negotiable.”

Even through her husband Dennis’s struggles, said added, “God keeps showing us the way. We’re alive, still have a home, and we’re not hungry yet.”

The family has also endured through difficulties imposed during the COVID-19 pandemic.

About a year ago, Gabbie developed a gastrointestinal condition (unrelated to the coronavirus) that lasted for several months and made it difficult to eat.

Gabbie eventually recovered, but Valeria said the experience helped her daughter relate even more to people who struggle with health problems.

“She did learn what is was like to be stuck in the house and not be able to do the things she wanted to be doing,” Valeria attested.

Between her own illness and COVID-19 restrictions, Gabbie also found it difficult to arrange large in-person fundraising events.

In 2021, however, Gabbie arranged an online auction selling donated items. This year she’s planning a return to in-person events, including yard sales and the annual pledge walk.

“My ultimate goal,” Gabbie affirmed, “is to keep working until there is a cure.”