Volunteers with Treasure Coast Home for the Homeless display some of the turkeys they distributed to needy families for the holidays last year.

As homeschooled high school senior Mallory Cunningham describes it, she never thought a routine trip to Dunkin’ Donuts would forever alter her understanding of how hard life is for some.

When she was about 8 years old, she had stopped at the local franchise with her sisters Ivy and Kayleigh. During their visit, the girls spotted a homeless family living in the woods nearby.

“There were kids around our age,” Mallory recalled. “We realized that some people aren’t as fortunate as us.”

The chance observation resulted in more than just a sobering epiphany.

Joined by their friends Karina and Alexandria Del Toro, the girls soon were raising funds to benefit area agencies that help the homeless. First, they opened a lemonade stand. Then, they began making and selling jewelry. Next, they set up a donation bin at church to collect new and gently-used clothing to give to families in need.

These efforts so impressed their parents that in 2016, Richard R. Del Toro Jr., Karina and Alexandria’s dad, filed the paperwork to turn the charity into a 501(c)(3) nonprofit, called Treasure Coast (TC) Hope for the Homeless.

Since then, Mallory has incorporated her advocacy into just about every aspect of her life as a Florida teen who loves get-togethers, hanging out at the beach, dancing—and Disney Channel original movies. (Mallory insists she’s watched every one, mostly with her sisters during after-lunch breaks from homeschool.)

Mallory made “help for the homeless” her platform in a successful bid for a local title in the Miss America competition. In 2019 she was named Miss St. Lucie County Outstanding Teen. 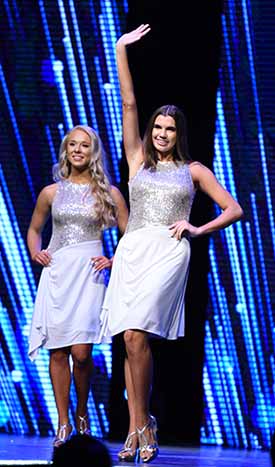 Mallory Cunningham, right, made helping the homeless her platform in a successful bid to be named Miss St. Lucie County Outstanding Teen.

“I loved competing,” Mallory said, adding that the pageant allowed her to employ skills she has worked hard to develop: ballet, public speaking, and engaging, and informing an audience. She enjoyed the chance to wear an evening gown and tiara.

She especially liked being able to share the plight of people in her area who struggle with profound needs.

“A big part of being a title holder is going out into the community, meeting people, and promoting your platform,” she explained. Which meant that whether she was doing a radio interview, announcing an upcoming gala, or networking with her congressman as she fulfilled her Miss Teen role, Mallory was able to point people to her favorite charity—the one she helped found.

And as an organization, Treasure Coast Hope for the Homeless has come a long way—though it still uses the original logo the Cunningham and Del Torro girls sketched onto t-shirts with colored markers years ago.

For one thing, since becoming a registered nonprofit, all donations the organization receives can be counted as tax-deductible.

Another way the organization has grown is through Mallory’s efforts to recruit local businesses as sponsors, especially for its biggest fundraiser—an annual charity golf tournament. 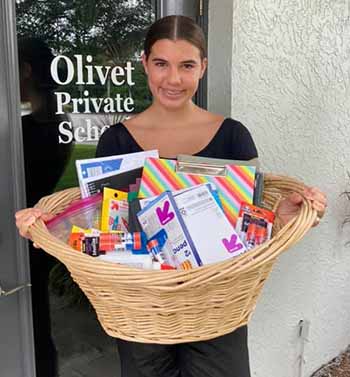 All told, since its humble and informal beginnings, TC Hope for the Homeless has raised $250,000. It doesn’t provide direct aid to the needy, but it refers them to area agencies that offers hands-on assistance.

“We really like to collaborate with other nonprofits and help each other,” explained Mallory. “We also partner with a couple of churches.”

Recently, TC Hope for the Homeless teamed with CareBag, a nonprofit that focuses on access to proper hygiene. Together with other sponsors, the two charities acquired three mobile shower units—custom trailers where people can wash and use the toilet in a private and sanitary setting. Soap and other personal care items are also provided.

Other projects undertaken by TC Hope for the Homeless include purchasing a stove for an agency that provides meals for the needy, distributing Thanksgiving turkeys, and raising funds for students who can’t afford school supplies.

Mallory has been an advocate for the homeless for so long that it now figures prominently in her goals.

Mallory also campaigned for and won the office of president for the senior class of her homeschool co-op.

“My job is to organize outings and social events for the high school and our class,” said Mallory.

Within the past few weeks, she was also elected secretary of Youth Leadership with The Roundtable of St. Lucie County, a program that focuses on civics and improving the community. One of the first projects the group took on was adopting a local park to keep clean.

And after high school, said Mallory, “I want to go to college and study business marketing or management. I want to keep building the nonprofit.”

Mallory credits her accomplishments and ambitions to the fact that she was homeschooled—by a mom who was herself homeschooled and recognized how this educational option could give her daughter the solid skills and the freedom she needed to thrive.

“It’s given me flexibility,” said Mallory. Without homeschooling, “I’d probably not be able to do all the things that I like to do.”