One fact makes Tucker’s adventures especially remarkable: they were inspired by an educational model his parents chose in order to protect Tucker from what was then a grave threat to his health.

As his mother Becky explained, Tucker was not quite 2 years old when he was diagnosed with an immune system disorder. His low white blood cell count made him more susceptible to illness, so his parents had to take extra measures to prevent him from contacting pathogens.

For example, said Becky, Tucker’s visits with the doctor had to be conducted in an isolated, sterilized room. The family’s childcare provider would no longer care for him.

The need to control Tucker’s environment, plus the long bus ride from the family’s rural home in eastern Virginia to the nearest school, were among the reasons the Fishers decided to homeschool Tucker from the beginning.

As a result, said Tucker, “I haven’t had any traditional schooling.” 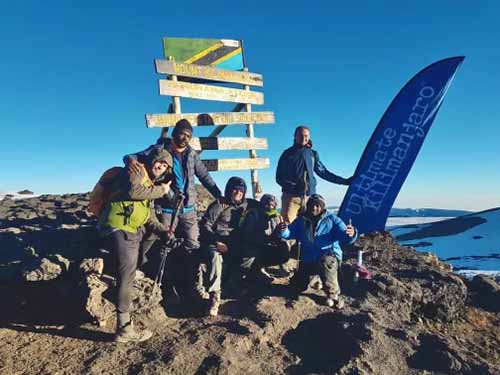 Tucker and his traveling buddies pose atop Mount Kilimanjaro.

That doesn’t mean he did all his learning barricaded in a bedroom.

Becky said that, in researching ways to boost Tucker’s immune system, she quickly recognized the need to get him out of doors.

“It became important for him to have exposure to nature,” she explained. “He needed to go outside and get fresh air and vitamin D.”

By the time he was in elementary school, Tucker discovered he’d much rather be tramping through the woods than sitting at a desk. And as his health improved, he recruited friends to join him in his adventures.

Tucker said the refrain in his neighborhood became, “let the kids go over to Becky’s and climb trees or go hiking.”

His impromptu explorations developed into more structured activities when Tucker joined the Boy Scouts. His enthusiasm for understanding and managing his environment also helped him cultivate relationships, which led to more opportunities in his teen years.

But first, there was one other physiological challenge Tucker had to grapple with. Around age 9, he was diagnosed with dual learning disabilities: dyslexia and dysgraphia.

Again, homeschooling provided his parents the flexibility to research and experiment with tools and therapies to help Tucker overcome these challenges.

Becky said Toe by Toe, a multi-sensory manual written by a British educator, especially helped Tucker improve his reading skills. She also relied on technology such as audiobooks and reading software. 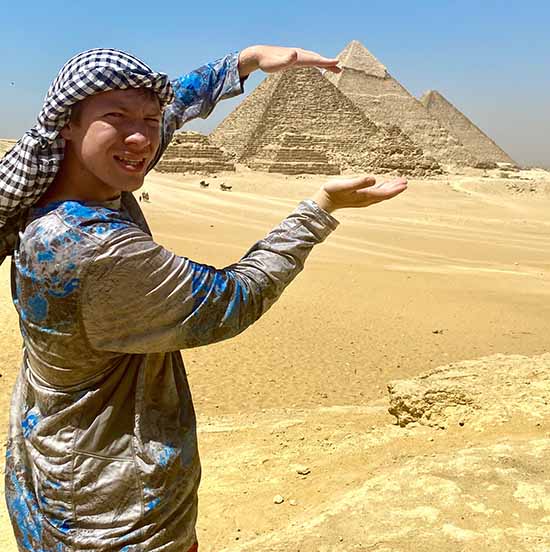 The important thing, she added, was to boost Tucker’s confidence by letting him find the learning methods that worked best for him.

“My learning style is very much hands-on,” said Tucker. “If I can just do something two or three times, I really understand it, as opposed to reading it in a book.”

And Tucker certainly applied himself, mastering all sorts of practical skills, from campcraft to counseling to completing a community service project and earning the rank of Eagle Scout.

By age 16, the connections Tucker forged through scouting linked him to a group that drew him into more far-flung exploits.

First, he biked with four companions from Copenhagen to Berlin.

At age 17, he biked with friends from London to Paris. That year, he also did his first trek down the south rim of the Grand Canyon, up the other side, and back again.

Tucker noted that the hike demanded more than physical stamina. Especially on the 5,000-foot ascent from the canyon floor to trail’s end, he said, “you keep looking up above your head, and it seems like you’re never going to get there.”

In 2020 came even bigger things as Tucker and his friends embarked on a multi-continent expedition.

They started in Peru before heading across the Atlantic for a trip up Africa’s highest mountain, Kilimanjaro. Aside from the beauty of watching the sun rise as he perched atop the snowcapped summit, Tucker said two things about the 19,000-foot peak stood out to him. First, the cold: “I had three pairs of gloves on!” And second, how the thin atmosphere affected him physically: “You take twice the size of a normal breath, and you’re still exhausted.” 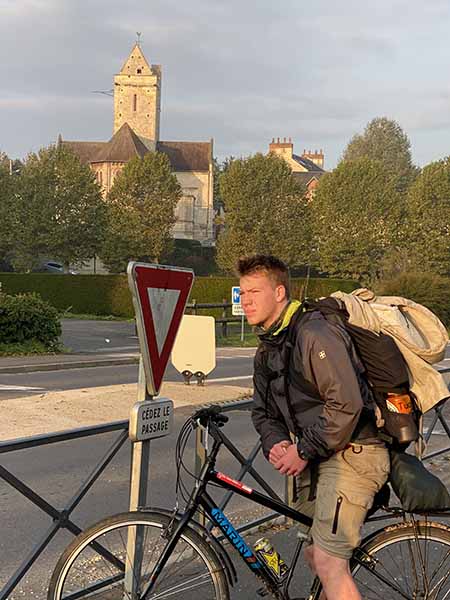 Tucker catches his breath during a bike tour in Europe.

From Tanzania, he and his companions flew to Egypt, then to various places in Europe—Germany, Austria, and Bulgaria. Tucker spent a month hiking the 500-mile Spanish pilgrim’s trail known in English as the Way of Saint James.

Just this year, Tucker traveled to Ecuador and the Galapagos Islands, where he encountered giant tortoises that were later determined to be a new species.

Though these excursions exposed him to amazing sights and allowed him to test his own mettle, Tucker said they ended up being about much more. Not only have his travels strengthened existing ties, they’ve also illustrated how enriching it can be to build new relationships.

In Greece, for example, Tucker said he struck up a friendship with a campground manager that led to a temporary job. In exchange for painting and cleaning at the facility, Tucker earned lodging and food.

As Tucker described it, the manager “made rotisserie chicken and set up a buffet big enough for an army. Every time we thought there couldn’t be more, he’d bring more food out.”

After weeks of ramen noodles and trail mix, he said, “it was nice to have a homecooked meal.”

Likewise, travelers that Tucker met on his second trip to the Grand Canyon recommended that he apply to their company for a job as a firefighter. That’s how he ended up spending this past summer battling blazes in the Pacific northwest.

One connection has especially helped shape Tucker’s vision for his own future. While still in high school, he spent time with a forester who showed the teen aspects of the profession—surveying property lines, identifying trees, and employing fire-prevention techniques.

Tucker said he quickly learned that managing and protecting vast tracts of woods involved many of the skills he’d studied and enjoyed.

For example, he said, “I loved map and compass work in Boy Scouts.”

At the advice of the forester, Tucker applied to Virginia’s Mountain Gateway Community College to study forestry. He was accepted and began classes this fall.

Once Tucker arrived on campus, he said, “the first thing that stood out to me was that the school has its own sawmill. I thought: ‘I’m not going to be sitting behind a desk all day listening to lectures.’”

And that has indeed proven the case.

“Every day I have a lab,” Tucker explained. “There’s not a day of the week that I haven’t gone hiking or spent time outdoors.”

Which is just how he likes it—and learns best.