Over the last couple of years, my husband has taken the usual “eat healthier” resolution to a more significant level than most people I know—not because he is really into fitness, but because he has been struggling with chronic digestive problems (ultimately diagnosed as a bacterial overgrowth in his small intestine).

As he’s been to various doctors, undergone tests, and taken a myriad of both natural and traditional remedies, he’s also gone through several different diets to try to eliminate foods that will feed the bacteria. We’ve gone through stages of gluten-free, diary-free, sugar-free, grain-free, and yes, even food-free. (My husband would say most of these stages have been “food-free,” but he literally went for two weeks—under doctor’s supervision—on an “elemental diet” that supplies all necessary nutrients in a nasty liquid mixture.) Most of last year, however, has been spent on a pseudo-Paleo diet with a few extra restrictions, like no onions and garlic. (He can only eat chives and the green part of green onions, poor guy.)

Long story short, his symptoms are improving, he is healthier overall (and at a better weight), and we’re hoping he’s on the mend. In the meantime, I’ve learned to get creative in the kitchen! So if you’re looking for a few healthy, low-carb recipes to help with your New Year’s resolutions, you’ve come to the right place! Here are three of my favorites, which are gluten-free, dairy-free, and (I believe) compliant with Paleo and Whole 30 diets. I’d love to hear what you think! 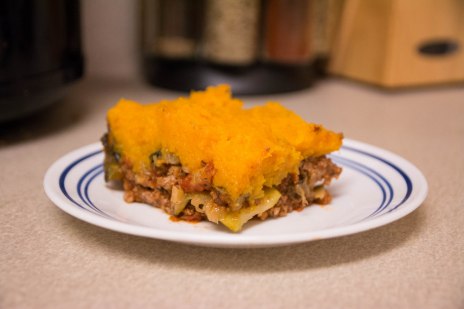 This dish has similar flavors to a shepherd’s pie and similar layers to a lasagna, hence the name. If you want to try this with kids who may not be too crazy about eggplant or butternut squash, you could double the zucchini and substitute sweet potatoes for the squash.

Preheat oven to 400°. Cut butternut squash in half and remove seeds. Cover a cookie sheet with aluminum foil and place the squash on it, cut side down. Cook for 45 minutes to an hour, until the thickest part of the squash can be easily pierced with a fork. When cool enough, remove squash meat from skins and mash, butter, and salt to taste as you would with mashed potatoes. (You shouldn’t need milk since the squash usually has enough moisture by itself.)

Meanwhile, cook beef with green pepper. Drain fat and season to taste with salt and pepper. Add diced tomatoes, tomato paste, and spices, along with 1/4 cup water. Bring to a simmer and cook for a few more minutes (to release more flavor from the spices).

Cut off the ends of the zucchini and eggplant, and slice into strips (about 3–4 inches long, half as wide, and around 1/8 inch thick). Place in a bowl and toss with a few tablespoons of olive oil until moistened.

Place half of the meat mixture in the bottom of a 9″ by 13″ casserole dish. Layer half of the zucchini and eggplant on top of the meat as you would with lasagna noodles. Sprinkle layer with a bit of salt. Repeat with the remaining meat and zucchini / eggplant. Top with a layer of mashed squash.

Cook in a 375° oven for about 30–40 minutes, or until the zucchini and eggplant are tender. 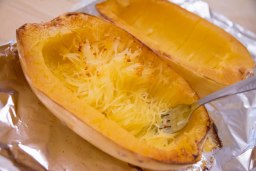 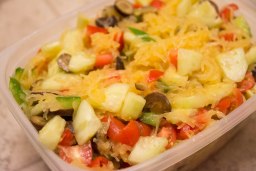 The first time I tasted this while making it for my husband, I quickly decided to save a significant portion for myself. Maybe I’m crazy, but I think the spaghetti squash in this dish is almost better than regular noodles (and I love noodles)!

Cut spaghetti squash in half, remove seeds, and place cut side down on pan (as with butternut squash above). Poke the back of each half 4–5 times with a fork (to release steam). Cook in a 400° oven for about 45 minutes, or until squash is fairly easily pierced with a fork. (Other forms of winter squash are fine if you cook them a little longer than necessary, but you’ll want to try to keep the spaghetti squash from overcooking so that the “noodles” inside don’t become too mushy.) Allow squash to cool. Using a fork, scrape out the stringy squash meat, separating into spaghetti-like strands. Allow to cool further in the fridge if possible before adding other ingredients. (I often cook the squash the night before.)

Add all remaining veggies. Mix vinegar, olive oil, and salt in a small bowl before pouring over the salad. Mix thoroughly. Add a little more oil, vinegar, or salt to taste. Makes about 4–6 servings as a side or 2–3 servings as a meal. 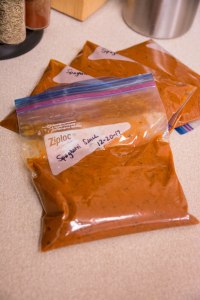 It’s difficult to find spaghetti sauce without added sugar and impossible to find it without onion and garlic. I added several veggies to this sauce to make it sweet and flavorful. The kids readily eat it over their noodles (bonus points for getting kids to eat their veggies!), but you can eat it over spaghetti squash for a lower-carb option. I often put portions of this in Ziploc bags and freeze them for my husband to take on the road.

*If you don’t have any issues with onions, I would add one small fresh onion (chopped) instead.

Heat oil in a large saucepan. Add all the fresh veggies and sauté for about 5 minutes. Add remaining ingredients and bring to a boil. Lowe heat, cover, and simmer for about 30 minutes, stirring occasionally. Remove from heat and let cool if needed before blending with food processor, regular blender, or immersion blender. Makes about 6 cups of sauce.