After 10 years of competition, brothers Itziar and Kenai Rios have come to view table tennis as much more than a sport. It has also become a way for them to share the values they’ve learned as homeschoolers.

Itziar, 18, and Kenai, 15, are ranked in the top five of their respective age groups among table tennis players in North Carolina. Continually working to improve, the brothers plan to compete for the first time in a tournament next year that could earn them spots on the team that represents the United States in international competitions.

The teens are already ambassadors of a sort—for both table tennis and homeschooling.

They’ve both been homeschooled since kindergarten. Since Itziar graduated last year, he has been studying to be a Level 1 International Table Tennis Federation (ITTF) coach and training full time. He’s exploring college options while hoping to be selected for a professional league in Europe.

In one respect, homeschooling helped inculcate in them the determination and dedication they needed to excel as athletes. These attributes grew out of the reason their parents decided to homeschool.

“We wanted to instill Christian faith in our kids,” explained Didi, their mother. 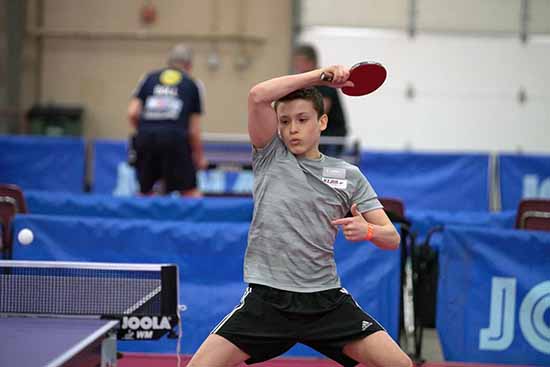 Homeschool graduate Itziar Rios competes at a tournament. His goals include coaching and playing table tennis as a professional.

Pablo, their father, said his boys exhibit their faith in certain traditional ways—studying Scripture and participating in family devotions. But, it was their love of table tennis that manifested a belief in extraordinary outcomes.

This occurred more than a decade ago when a friend at church offered Pablo a used ping pong table.

“I thought I’d take it home and see if the boys liked it,” he recalled. “Next thing I know, we’re playing until 11 o’clock at night.”

When a coach couldn’t be found his sons begged him to coach them, but he had to admit that his only experience was playing recreationally while he was in the military.

To improve his knowledge of the sport, said Pablo, “I started going on YouTube and watching videos.”

Meanwhile, he told his boys, “God is going to be your head coach.” 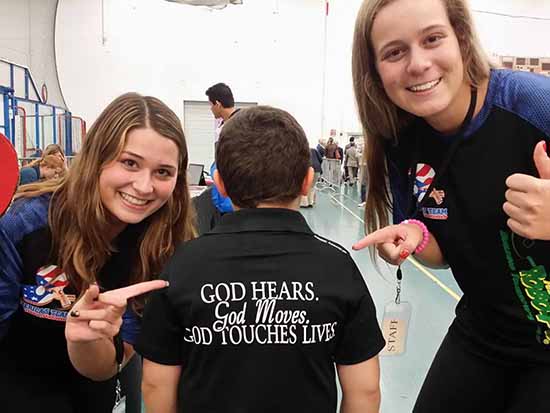 Kenai Rios displays one of the encouraging slogans he and his brother Itziar have had printed on their sports shirts.

They practiced in their garage, training for a whole year without competing. Their first chance to compete came while the family was still living in Puerto Rico. Kenai, then 5, took the 1st place medal for players 7 years old and under. Itziar, then 8, made it to the quarterfinals in his age group.

Now teenagers, the boys compete in several tournaments each month, a schedule that demands hours of practice every day. Homeschooling helps them adapt to this schedule.

The family has also found time to turn table tennis into the basis for community outreach. At churches, schools, and other venues, the brothers demonstrate their skills and use their passion to encourage young people in identifying and pursuing their interests.

They’ll illustrate different ways to grip a paddle, fumble a bit while trying to play left-handed, or incorporate into their friendly volleys a narrative such as the well-known story of David and Goliath from the Bible. 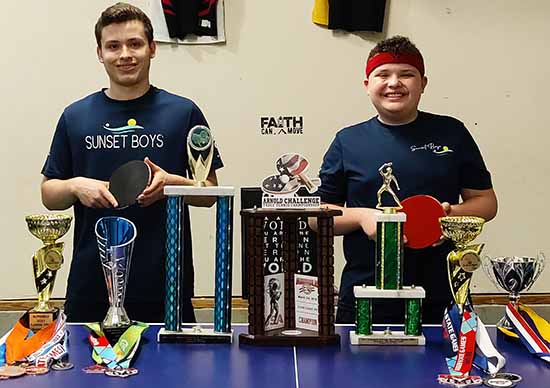 Itziar and Kenai Rios pose with some of the awards they've earned from competing in table tennis. The brothers use the sport to encourage other students to develop their own talents..

“We make it fun,” said Kenai. “We try to get kids intrigued in the sport.”

They’ve also given away 4,000 ping pong balls printed with uplifting slogans, such as “reclaim your dreams and live your purpose.” They reprise this theme at tournaments by wearing shirts bearing similar inspirational phrases.

As Didi explained, “We use the sport to encourage kids to know that God always gives you a talent—that you are precious.” And once you find that talent, she added, “use it!”

This positive attitude has also benefited the brothers as they look for ways to meet the financial challenge of competing in a sport at a high level. Top-quality paddles, for example, can cost hundreds of dollars. Travel to tournaments and additional coaching add to the expense.

To help defray these costs, Itziar and Kenai raise funds by teaching private and group lessons in table tennis. They also hope to find sponsors.

The boys said that success in the financial aspect of the sport is important, because they believe that with higher-level coaching and competition, they can be among the top three table tennis players in the US.

As for their long-term goals, the brothers pointed out that some universities offer table tennis scholarships, and that top players can earn money by signing with professional leagues in Europe.

Meanwhile, Itziar and Kenai work hard to ensure they remain true to the values they were raised in—and their homegrown sporting roots.

“They still play in the unheated garage,” noted Pablo.

And as Didi said she reminds her sons: “Our priority is always God, family, and then the sport. It’s not about positions or ratings, but what we can give back to the community.”

Photo Credit: Photos throughout are courtesy of the family.