Above: The St. Louis Patriots outlasted the Tulsa Jaguars 6-1 to win their first championship at the Homeschool World Series in May. Photos by Sarah Durham/David Prentice for Defining Moment Sports Media.

Researchers at last week’s Harvard panel on homeschooling dismissed this particular criticism of the educational method, agreeing that studies show home-educated students are engaged in their communities to a degree that often exceeds the participation of their peers in traditional schools.

The May 27 event was the fourth session of a homeschooling conference sponsored by Harvard University’s Kennedy School of Government.

Panelists addressed the question of whether homeschool parents tend to isolate themselves and their children, a characterization often employed by critics who argue for increased government regulation of home education. In Germany, for example, homeschooling is all but banned because lawmakers fear homeschool families might withdraw into “parallel societies” that are antithetical to cultural and civic norms. 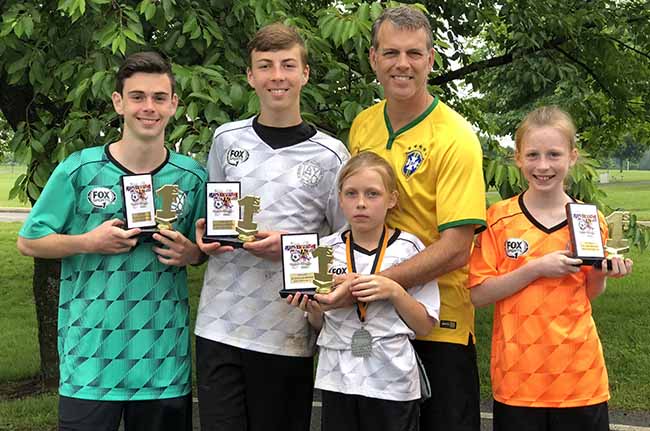 The reality, researchers said, is that American homeschooling parents are intentional about seeking ways to broaden the interactions and experiences of their students.

“It’s hardly the case that homeschoolers are staying within the walls of the home in isolation,” said David Sikkink, a professor at the University of Notre Dame.

McShane agreed. “It’s really a way to draw people together into wonderful communities,” he added.

Looking at the Research

In drawing their conclusions, panelists referred to their own discussions with homeschool families. But they focused mainly on scholarly research, such as the Understanding America Study conducted by the University of Southern California, the Cardus Education Survey, and the federal government’s National Household Education Surveys Program.

Sikkink said the choices exhibited by families in selecting activities for their students seem to correlate to the reasons they cited in choosing to homeschool in the first place. These include not only a desire to boost their students’ academic performance but also a concern with providing an alternative to the social and moral environments their children are likely to encounter in local schools.

McShane echoed this thought. “When we talk about socialization, there’s a directional quality to it,” he said. “Traditional school environments might not always be the best place for socialization. Socialization works both ways.”

He added that the concerns expressed by parents account for why homeschool families often form groups whose members are diverse in terms of ethnicity, economic background, or even religion. But they are united by the ideal of how they want their children to be educated—and for very practical reasons such as shared teaching sessions, organized field trips, and other events.

In fact, reported Sikkink, research among homeschoolers shows that “77 percent are involved in activities with other homeschooling families.”

And according to Daniel Hamlin, a professor at the University of Oklahoma, homeschool families characterize their experiences in like-minded groups and in the larger community as very positive.

He cited a study in which he interviewed 31 adults who had been homeschooled. Only three of them, Hamlin emphasized, recounted experiences “that might be described as being in a state of social isolation.” The remainder, he added, “felt that homeschooling had not hindered their ability to navigate society.”

Hamlin said this strongly positive view of homeschooling prompted him to fear that people with less favorable experiences were being missed by his research, so he actually asked participants to refer former homeschooled students who might have cause for complaint.

“It was really hard to find people like that,” he reported.

Overall, the research cited by panelists underscored their depiction of homeschoolers as outward-facing and engaged.

Homeschooled students also rate highly in expressing gratitude and in being tolerant of criticism toward religion.

Although some have tried to stereotype homeschoolers as dogmatic and insular, Sikkink said research shows that homeschoolers display a “higher support for democratic principles, especially minority rights.”

These observations comes as no surprise to Home School Legal Defense Association staff attorney Amy Buchmeyer, who credits homeschooling with fostering her interest in civics and political activism.

“I volunteered for my first campaign at age 9,” she recalled while reflecting on the panel’s discussion. “A local homeschool dad was running for a seat in our state House of Representatives, and my family got involved. My dad took my siblings and me with him while he distributed campaign literature. I loved it. The candidate won the election and played a critical role in blocking a gas tax the next year, a fight my family avidly followed. It taught me firsthand the importance of actively supporting candidates who represented my values.”

“GenJ engaged me in the political process in a variety of ways—from volunteering at my local victory center, to hosting voter registrations, to writing letters to the editor,” she recounted. “I learned to appreciate all the ways I could get involved on a daily basis without running for office myself. The lessons I learned during those years still inspire me today.”

Panelists speculated this trend may stem from the fact that many states bar homeschool students from participating in extracurricular activities at public schools—including competitive athletics.

But according to HSLDA senior counsel Mike Donnelly, this doesn’t mean homeschool students lack opportunities for taking part in sports.

“For 15 years, I’ve coached all seven of my children in our county soccer league,” Donnelly commented after the panel concluded. “And I’ve encountered so many homeschoolers in other parts of the country with similar experiences. It’s just not the case that getting into sports requires access to the public schools.”

Hamlin pointed out during the panel that, in areas with large homeschooling populations, families have been successful in forming sports leagues specifically for homeschool students.

His observation illustrated what panelists noted overall about homeschooling and social engagement—findings show that parents who actively pursue options for their children will discover a wide range of opportunities. As another example, McShane cited a family who homeschooled in the morning so their students would be free in the afternoon to apprentice in various trade skills.

He added that, in his interaction with homeschoolers, “a phrase I heard over and over again is this idea of ‘doing life together.’”

In other words, the homeschooling experience is founded on an ethos quite opposite from the urge to drop out and go it alone. It’s about building communities.