Families like José Antonio Martínez Payanes and his wife Ana Rosa want to homeschool their children, but Cuba has transformed a fundamental human right, freedom of education, into a crime for which one can be placed in prison. 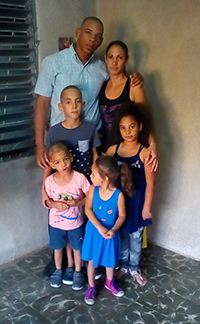 After the Cuban revolution in 1959, religion was removed from school and replaced with progressive ideology. Article 39, Section A of the constitution says that the state’s principles “bases its education and cultural policy on the advances of science and technology, the Marxist and Martian ideology.” (The latter refers to the 19th century Cuban intellectual and activist José Martí.)

But Sections 38 and 39 contradict Article 8 of the constitution, which separates the church and state.

The Payanes and Rigal families, who wish to teach their children according their beliefs, removed their children from the school system—despite the fact that homeschooling remains illegal.

In the case of Ramon Rigal, the subsequent process of dealing with Cuban authorities amounted to a mass of contradictions. Officials broke their own laws, showed they were uninterested in peaceful dialog while acting arbitrarily—exploiting and abusing their citizens so that no-one could critique how the state is being run from within as it tries to indoctrinate citizens from a young age.

Sadly, this is nothing new.

Cuba has been under fire for human rights violations such as arbitrary detention and short-term imprisonment, and even though these crimes have been in the spotlight thanks to key international actors and non-governmental organizations, citizens are still under oppression. Those who criticize the government face criminal prosecution and freedom of expression is nonexistent. As for homeschooling, it is seen as a threat to the educational model imposed by the state.

Home education is growing globally, as more parents wish to direct the education of their child—a right that should be guaranteed. Cuba and other countries like Germany that have banned homeschooling believe home education is a threat to society and the state, even though research shows that children who are homeschooled outperform their peers and contribute to the betterment of society.

Home School Legal Defense Association has led the charge in fighting unjust punishments for families who wish to homeschool in their countries where it is not legal to do so. Can you help us in supporting this family and many others by donating today?

We need to continue to raise awareness and call on the Cuban government to allow citizens to homeschool, a fundamental human right that should never have been taken away.