Today we learned that Pastor Ramón and his wife, Adya, have been detained as well. 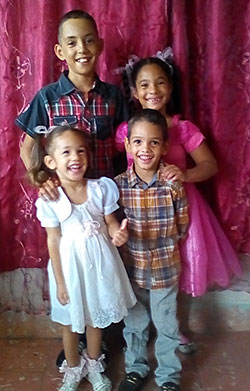 These homeschooled children face an uncertain future unless the Cuban government lifts its ban on home education.

Jose Martinez Payares of Guantonamo, Cuba, and another family who wishes to remain anonymous, had followed the example of Pastor Ramón by enrolling their children in a Christian distance learning school based in Mexico. Following an arrest on March 22, Pastor Ramón was visited “almost daily” by police, who demanded he send his children to school.

Then he was told he is not welcome in his homeland, but when he tried to leave with his family, authorities stopped him. Now he believes he will soon be sent to prison.

The Rigals and Payares familes—along with several others, are in an impossible situation. Their religious convictions do not allow them to send their children to the atheistic communist Cuban schools, and they are not able to leave the country. They believe that their rights as parents under international law demand respect.

“They told me I am a ringleader; I inspire others to follow my example. They told me that I am a rebel,” Ramón related to me during one of our recent, impassioned, discussions.

He was referring to Cuban authorities, who in 2017 sentenced him to a year in prison (commuted to hard labor) and kept his wife, Adya, under house arrest for 12 months.

Ramón still refused to enroll his two children in the local state school. So a few weeks ago, he said, “they encouraged me to leave.”

Here’s how he described this “encouragement”:

From 7:00 in the morning until 2:00 in the afternoon, they questioned me about the children and educating at home. They told me that I will be prosecuted again, and they may take my children. They handcuffed me and took me to the station, and they told me that the UN could not do anything for me. My children are nervous and sad. The police told me they were going to arrest the other [homeschooling] parents, too.

I was more than alarmed at hearing this. I knew that Cuba is notorious for violating the rights of its citizens, but at this point I feared for the Rigals’ safety.

J. Michael Smith, HSLDA’s president, readily approved my request to book airline flights out of Cuba for the Rigals. But, just hours before their scheduled departure, officials abruptly changed their minds and prevented the family from leaving the country.

“They told me that before I leave, I have to condemn the other families who are homeschooling their children and to tell them to stop and put their children in school,” said Ramón. “This I cannot do.”

That Ramón refuses to violate his conscience comes as no surprise. One reason he won’t send his children to state school is because he does not want them indoctrinated with the atheistic communist ideology prevailing in the school system.

After his 2017 arrest, Ramón enrolled his children in a Christian distance learning school based in Mexico. When other families began following his example, the police stepped in.

Authorities harassed these families as well, reminding them that, according to their interpretation of Cuba’s constitution, “teaching is a function of the state.”

“We are being persecuted and besieged by the Ministry of Education and the prosecutor’s office in Cuba,” Yordimile Mustelier, a father of three, told me. “They constantly threaten us with prison if we do not immediately send our children to school. This is totally contrary to our Christian principles.”

Now that the Rigals, and families like them, have been made prisoners of conscience in their own homeland, our only hope is to appeal to the international community.

With your help, we can make known the plight of Cuban homeschool families to leaders in the United States and abroad.

“Please, please, on behalf of our families,” Yordimile said, “defend our cause before the UN, write to the president of Cuba, Díaz-Canel, and to the United States of America!”

Today I wrote to President Trump, asking him and his administration to help the Rigal family.

Will you join with me and ask him to help these brave families?

Cuba must allow families to choose home education or to at least have the opportunity to leave the country. The United States must urge Cuba to respect these rights of its citizens.

This is not an outrageous request. The Cuban government has already ratified numerous international treaties that recognize certain fundamental human rights—including the right of citizens to live according to their religious convictions and of parents to direct the education of their children. Cuba has pledged to protect these rights. Now it needs to honor this promise.

Please, will you stand with us as we advocate for these families? Our work to advance liberty is a global effort and we need your help! Please take action today—ask President Trump to help. Your message will also be sent to the Cuban ambassador.

Together, we can defend the rights of these homeschooling families and advance the cause of freedom around the world.