Our Friday night family tradition began before my first child made his appearance. After a long week at our respective jobs, neither my husband nor I was up to entertaining or leaving home. We simply wanted to curl up and check out for awhile. So, we started pizza and movie night.

Fifteen years later, this is an established tradition in our household. Only now, we have added three kids (and sometimes stuffed animals) to the viewing crowd. 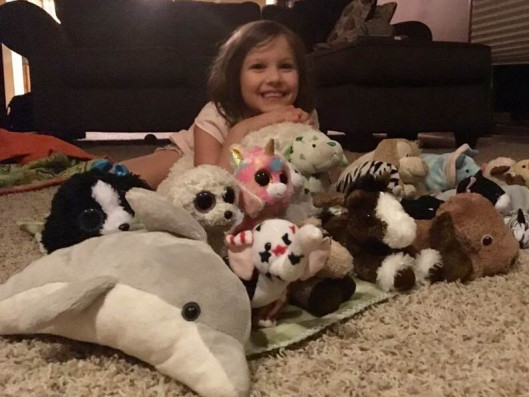 Our youngest daughter who often brings all her stuffed animals to movie night.

It gets tricky to find good family viewing every week. We’ve watched all the Disney/Pixar animated films and often revisit favorite movies (e.g. The Princess Bride, The Sound of Music) multiple times. We have hit some real duds, but we have found a few treasures.

We are lovers of history, and often we find movies that support what we are studying at the given moment. Occasionally, we watch a movie that doesn’t align with our values, and we take the opportunity to talk about our beliefs and how they differ from those of the characters portrayed in the movie. I’m most interested in helping my children learn from the mistakes of others rather than in shielding them from knowing about sin. But we do avoid those things that would damage their minds and hearts. My kids range from 8 to 14 and we are thoughtful about what is appropriate for those ages, paying attention to anything that would raise their levels of anxiety.

Our library system has a lot of DVDs we can check out for free; we also stream from Amazon and Netflix when we are paying for one or the other.

Here are some of our favorites that teach something important that we value:

Perhaps, like me, your family enjoys a good movie night. What are some of your favorites?

Rachelle is wife to Michael, and homeschooling mom to Ben, Kyrie, & Evie. She works part-time as a travel coordinator for non-profit organizations, and enjoys reading, writing, and ancestry research.