“How do I motivate my teenage son to do his best?”

This was the question that came up most often when I asked some friends about their homeschooling struggles. I have a 15-year-old son—and an 11-year-old daughter—who are pretty comfortable with mediocrity. I’ve thought a lot about this question.

I don’t really have any answers, to be honest. But I do have ideas.

My first idea isn’t anything you or I do with our student. It’s what we do for ourselves:

The Super Teen is a mythical boy or girl who lives in our head and skews our perception of how our actual teenagers ought to be performing. The Super Teen is usually featured in Facebook videos about how he/she designs robots, leads a social action program, or starts a business selling custom socks. You’re pretty sure this teenager also has good handwriting, is socially adept, and is in the middle of a brilliant research paper that will win scholarships.

It doesn’t help that older people tend to remember teenagers in their own time as Super Teens, and wonder what’s wrong with “teenagers today.” The Super Teen sets an impossibly high standard, and our perfectly ordinary teenagers fall woefully short.

With the Super Teen removed from his/her pedestal, the following ideas have been effective for us:

Darren and I have no qualms about offering rewards to make the work more palatable. Money is extremely inspirational. So are extra privileges. Last year, we set aside one night every week as a family D&D night, on the condition that kids completed all their school. Darren would even award in-game advantages to kids who did a good job in school. Generous rewards can motivate even the most reluctant worker. 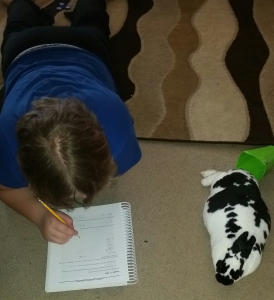 Idea #3: Build lessons around what interests each teenager.

Obviously we can’t customize everything—geometry and earth science are still on the docket even though nobody is passionate about those subjects. But we let them have a say in their course load, and we work with them in the way they learn best. Sometimes that means that I just sit on the couch next to a kid who otherwise can’t focus on the math lesson.

I’m a big believer in many small lessons rather than a few long ones. Starting in the elementary years, my kids do, say, four math problems instead of all 10. We answer many review questions orally. We skip chapters in history that I know they’ll pick up later. In handwriting, that bane of my homeschooling career, I require them to write one or two sentences at the time. As they get older, the lessons necessarily get longer—but we still keep them to manageable portions. It’s very motivating to be able to see the end of a lesson.

Idea #5: Let somebody else push them sometimes.

Joining a co-op or a finding a tutor can make a lot of difference in your teenager’s motivation. Sometimes they need someone other than Mom or Dad to explain, encourage, and inspire.

Idea #6: In time, they will take ownership of their own future.

When I was in middle school, I was a sloppy student and a lazy worker. In high school, I went through American history on my own, and tried to teach myself chemistry. (I failed. But I tried!) The difference was that my future had become my own, and it was up to me to shape it.

We’ve seen this change in our own teenagers. At 13, our son did the bare minimum work with as little thought devoted to it as possible. Two years later, he engages with the material and analyzes what he’s learning.

We still have to push, and our teens are still unenthusiastic at times. But their work has a depth that wasn’t there before. They care more.

I’m still anxious when I think of launching my kids into adulthood. I know they’ll have to fill in gaps that we’ve left open. But the above ideas have served us well so far; we’ve seen our unmotivated kids grow into more responsible, more serious students.

In fact, I have to say that they’re pretty super teens.