One of the long-term homeschooling goals for our family is to help the girls develop a mature artistic taste (in the good sense!). We don’t want to micromanage their media consumption as teens and young adults, because hopefully they’ll choose good things themselves at that point. And by good things, I mean more than the absence of objectionable content; I want them to surround themselves with stories that are well-made and actually have some worthwhile quality to them somewhere. The main way we’ve been doing that is by being picky now and talking through what isn’t good about some of the dud shows or movies that we watch.

And I got really excited the other day because IT’S WORKING, GUYS!

We checked out some new movies from the library, as we do, and when Saturday morning rolled around, the girls put them on. The first was a Lego Friends one, and we had high hopes because we do love Legos around here.

Sadly, it was one of those dreary high school dramas where the mean girl stole a song that one of the friends wrote, and the friends got mad and did poorly-thought-through things to try and get back at her, and on and on and on. And one mean girl tempted another mean girl with a record deal that would make her rich and popular—because wealth and popularity is totally the best reason to play music? Neither Jonathan nor I could bear to be in the room with it. But I didn’t make them turn it off. I just made snarky comments as I passed through.

Meg herself decided she didn’t like it and turned it off. Her take: “It was boring and silly and it wasn’t even about Legos!”

So then we put on the other new movie, which was the new Tangled spin-off series. Again, it could have been really great. It’s got good animation, the full budget and merchandising of Disney behind it, and fun starting characters.

I realize that royalty are not known for their keen parenting skills, but I feel like her parents might have stepped in and said, “You are 16 and spent all 16 of those years exclusively in the company of a manipulative villain, and you have no idea what healthy human interaction is like. You are welcome to continue spending time with Flynn Ryder, but we do not acknowledge your engagement until you have matured. Lovable rogues make terrible husbands. Also: you need some education. Would you like to sit in on some meetings and learn how a kingdom is run?”

But no, everybody assumed that Rapunzel was going to be able to cope like a human. In this series, at least they gave her a lady-in-waiting/keeper, but then they played that character as kind of a bad guy? Or something? I’m not sure. Rapunzel herself demonstrated the social awareness of a caffeinated puppy, so we had all these humiliating Rapunzel scenes and it was horrifying. Meg got mad when Pascal stole a carrot from a bunny. Even the dialogue was boring.

And Meg turned that show off too! I’m such a happy mama. I love seeing the girls develop discernment on their own. There is hope! 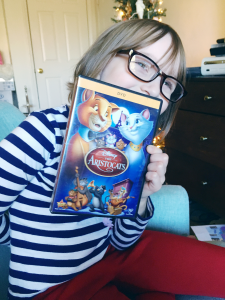 We put on The Aristocats for the rest of the morning. It may not be the very greatest of entertainment, but it interacts with high art and has sparked interesting conversations about inheritance law, greed, and the location and former economic importance of Timbuktu. Also, we adults did not feel like we lost brain cells for having spent time with it, which counts for so much.