After watching her daughter miss a first-place finish in a 4-H horse show by the slimmest of margins, Amy Mee offered a familiar phrase as consolation: you either win or you learn.

As it turns out, homeschooled 16-year-old Sarah Mee has done plenty of both.

Since entering 4-H horse competitions several years ago, Sarah has won three state championships with the miniature horse she shows. Sarah has also earned accolades for 4-H science projects, one which focused on keeping track of feeding horses, and another which dealt with what horse feed eventually becomes. (Yes—that.)

Sarah began riding lessons in 2014. After several months, said Amy, folks at the local barn recognized her daughter “has a natural ability with horses.”

So the following year, Sarah joined a local 4-H club. And though her love of horses was cultivated while riding a full-size mount, Sarah also arranged to show one of the miniature horses from the same barn.

This meant mastering a new set of equine skills. For example, instead of riding their miniature horses, competitors are pulled by their animals in carts in a class called driving. Another competition (known as trail) involves leading the minis through an obstacle course.

Sarah did well her first year, competing against adults in open shows in order to gain experience for 4-H competition. She ended up qualifying for the Pennsylvania 4-H State Championship Horse Show held at the Farm Show Complex in Harrisburg every October. There she scored a fifth-place finish with a mini named Dottie.

In 2016, however, Sarah was forced to switch to a new horse.

Her mother encouraged Sarah to view the change as providential, which turned out to be sound advice.

Working with her new miniature horse, Magic, Sarah went on to win the junior age group driving event at the 2016 Pennsylvania 4-H State Horse Show. The next year, she and Magic won the state junior in-hand trail championship, followed in 2018 with top honors in the state senior driving event and a reserve champion (second place) in the mini jumping class. 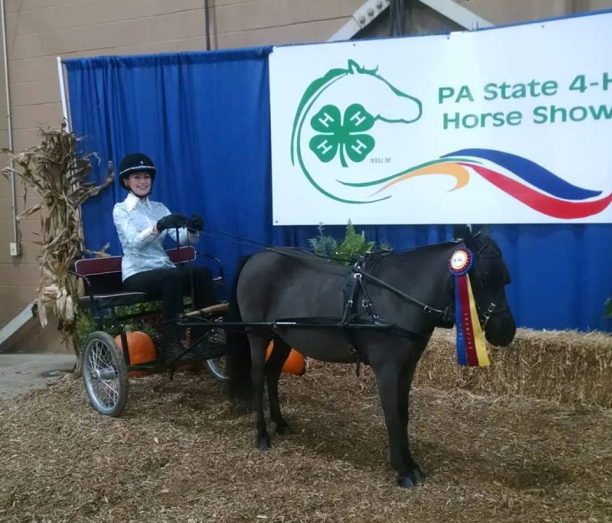 It was in 2017 that she and Magic missed out on winning the jumping event in dramatic fashion.

In the jumping class the competitor runs alongside the horse, leading it through a course of jumps. The first time through, Magic cleared all the jumps to qualify for the next round, which is timed. Of course, this makes negotiating the jumps that much more difficult, said Sarah, because “when you’re out there, you’re just running as fast as you can.”

The crowd can be a factor as well.

“It’s a popular event,” Amy explained. “It gets quite an audience. The cheering was difficult for Sarah, because Magic heard it and got excited.”

Magic missed the final jump. As for Sarah, said Amy, “she went back and made sure she finished, and with a smile on her face. Her dad and I were very proud of her.”

Together in a Big Way

With a touch of Belgian draft horse blood in her, “she’s big,” said Sarah. “Her back comes up to my eyes. When I first started riding her, she was a handful. But we’ve come pretty far together. I’m pretty much the only one who rides her and stays on.”

Competing with two very different horses can be demanding, but Sarah said that homeschooling has given her the flexibility to find time to practice and train. In recent years, from August through October, she’s been able to get to the barn five or six days a week. 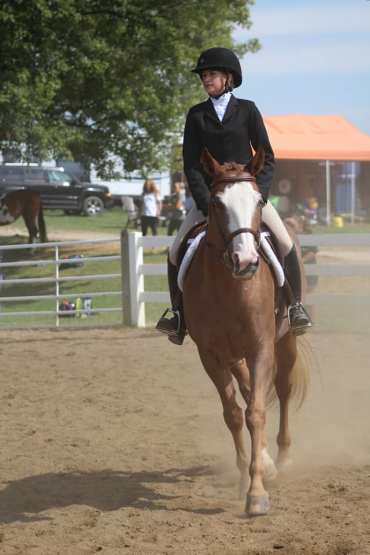 Sarah and Amy have also been able to work on joint projects involving horses. The two have designed and sewn numerous western-style outfits for Sarah to wear when showing the minis.

“It’s been fun to do that together,” said Amy.

As part of a local 4-H club, Sarah has been presented additional opportunities. She has served as club secretary and on the public relations committee; currently she is club president. She is also a member of the Allegheny County 4-H Teen County Council.

In 2018 Sarah and several other teens participated in the Pennsylvania 4-H Science of Agriculture Challenge. After speaking with veterinarians, barn managers, and horse owners, they designed a smartphone app for scheduling and tracking what food and medication horses are given.

The app included a feature for text messaging, which Sarah said users should find much more convenient than the typical way horse caretakers communicate—via a dry erase board tacked to a barn wall.

Sarah’s team demonstrated their app to a statewide 4-H event held at Penn State University. Then, in 2019 the teens again presented their research at Penn State on a more fundamental horse-care quandary—what to do with all that poo.

Focusing on the environmental challenge that animal waste presents to local watersheds, Sarah and her teammates experimented with the most efficient way to compost horse manure.

“We ended up having fourteen bins of manure in our yard,” said Amy.

One bin was left alone as a control. The teens treated others with various composting methods: stirring, adding vinegar or leaves.

“The kids would come over once a week and take the temperature of the manure, measure its volume, and take a picture,” explained Amy.

They eventually determined that the quickest way to reduce manure volume is to introduce red wiggler worms.

Sarah did discover a problem with the process, though: she ended up having to handle the worms herself, she said, “because no one else wanted to touch them.”

Ultimately, Sarah hopes her experience with horses amounts to more than just a high school adventure. She is currently taking a class in veterinary science at a local vo-tech school, with the goal of attending college for further equine studies.

Then, maybe someday, she’ll be training and providing horses for a new generation of 4-H champions.