If I had to summarize Anthony Esolen’s Ten Ways to Destroy the Imagination of Your Child in one sentence, I would say: A child’s natural-born imagination can be destroyed by adults when they overly structure a child’s life and remove the things that inspire him.

I have to confess that the book’s title rubbed me the wrong way. Maybe it’s just that I’m a tired lady who is trying to do the best job I can to raise my kids, and there are always so many things I’m trying to do “right.” Now I have another “don’t” to add to my list: apparently I have the power to destroy my kids’ imaginations and I must certainly never do so.

Still, I took away six big ideas from the book which I think can be helpful and encouraging to me and others.

1.Get the kids outside

Esolen bemoans the fact that many educators design long school days with short breaks and not enough summer to be outside and live “a true, real life.”

“We section off parks and zoos and act like those are the only places worth going to outdoors,” he writes. “We take kids on a trip to the Grand Canyon but never give them hours of freedom to explore the variations of hills or rocks or even drab birds which are actually distinct and delightful in our own neighborhoods. Kids live in cities but are not allowed to wander and explore in cities.”

This comment made me think of a delightful little picture biography I read to my kids about Leonardo da Vinci. Because Leonardo’s parents were not married, he was unable to attend a formal school. Instead, he roamed the fields near his house for hour and hours. He carefully inspected insects and played freely. This no doubt greatly impacted his life’s work and helped to shape him into the incredible inventor and artist he became. I cannot think of anyone more “imaginative” than Leonardo da Vinci. (Read my post about Leonardo here.)

One of the definite benefits of homeschooling is that our kids have less structure and rigid classroom time, and longer hours to play, including playing outside.

2. Give children some autonomy

Adults are good at placing “bureaucratic shackles” on children. We tend to micromanage kids’ schedules and overcrowd their lives with activities. Any downtime they have is often spent sitting with technology.

This problem of adults micromanaging children reminds me of the thought-provoking book Free Range Kids that I recently read and reviewed here. 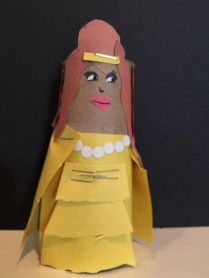 My 11-year-old has imagination in spades. Thankfully, I haven’t ruined it, yet. She never lets anything go to waste! This is a doll she made one day from the cardboard tube at the center of a used toilet paper roll.

In reading Esolen’s book, I also was reminded that I need to give my kids time to be bored. It’s so healthy for kids to be bored and have to struggle to figure out what to do. One of my favorite parenting books is Cloud and Townsend’s  Boundaries with Kids, where the authors write of a woman whose child came to her and complained, “I’m bored.” She told her child, “You are in charge of your own fun.” Because of this mother’s parenting philosophy, her child grew to be a competent and creative adult who always had something interesting going on.

All that boredom, coupled with a little autonomy, will spark a kid’s imagination for sure.

3. Be discerning about books

When it comes to books, there is a great divide. Some books spark the imagination and teach truth, and others fall far short.

Esolen is a big believer in exposing children to the classics. “When you starve your child of the folktale,” says Esolen, “you not only cramp his imagination for the time being, you help to render vast realms of human art (not to mention human life) incomprehensible.” 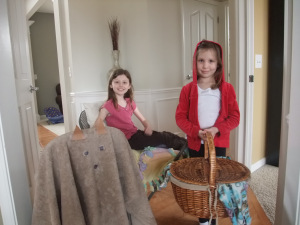 When it comes to books, Esolen wants parents to discern the difference between quality reading and cliché. Cliché is “good for a cheap, automatic, superficial, and temporary response.” Folktales and fairytales, on the other hand, teach kids about fundamental truths, where the reader can “brood over the mystery of this life” and respond with “silence, and patience, and thought.”

Everyone loves to hear a good story about bravery and courage—especially when it is true! Esolen notes that boys in particular are natural hero-worshipers.

After having three girls and then a boy, I can definitely attest to this fact. Even this morning, my four-year-old son, wearing his tattered Spiderman costume, was scaling the side of the staircase and leaping off in attempt to save the world, no doubt. 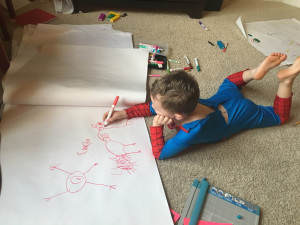 My son, drawing monsters and wearing his favorite Spiderman costume.

“If we wish to cramp the moral imaginations of our children, we must tarnish the genuine heroes of our past, but at the same time place mirrors for self-adulation everywhere,” Esolen writes. “Everyone is creative, everyone is ‘original.’ Every one of the millions of lemmings is to believe himself a ‘leader of tomorrow.’”

How will our kids be inspired to live a life of courage, self-control, and compassion, unless we give them true-life examples of heroes from our own history and our own faith?

Many of us allow our kids to watch television when we need an easy distraction or a last-minute babysitter, or because we are just plain tired. I remember feeling guilty when I allowed my toddlers to watch hours of television during my morning-sickness days. Thankfully, this did not ruin my kids and they are endlessly creative and imaginative people. So, I don’t think moms, who are doing the best they can, should feel guilty when they turn to Netflix in desperation. But I do think Esolen made some good points about limiting screen time.

“Television replaces the more strenuous and active exertion of the imagination required to read a good book,” he observes. If we want our kids to read books, it’s necessary to limit their television exposure.

Remembering his own childhood, Esolen laments all the other enriching activities that television has replaced in our society: “Every hour spent in front of the television was an hour not spent doing something else: playing ball, building a snow fort, talking to friends, collecting coins, watching the men tear down a condemned building, hopping a train to Scranton, hiking in the woods, reading David Copperfield, taking apart the engine of a dead lawnmower, or damming up a creek just to see what would happen.” 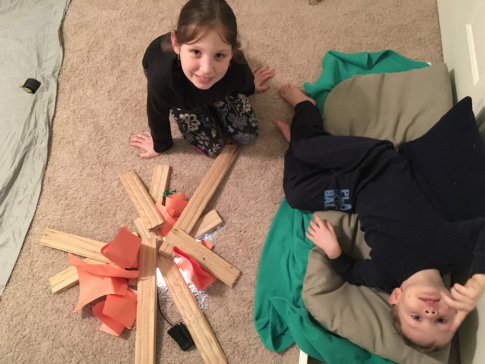 After we read the Esolen book, my kids decided to make a “camp fire” in their bedroom.

This book paints a vivid picture that haunts me: a child who is shuttled around from activity to activity but never has time for play, or free thought, or to develop true, lasting friendships.

Esolen writes: “Let the child be hustled from one functionary to another, among a welter of children whose parents are availing themselves of the same service. ‘Here is the karate teacher you do not have time to get to know, and all the students in the karate class whom you do not get to know.’”

“We use the word ‘friend’ to describe someone we hardly know, because the real depths of friendship are inaccessible to us.”

At the end of the day, is it more important for my kids to have back-to-back activities, or adequate free time to develop lasting friendships?

What am I teaching my kids when I focus less on relationships and more on activities and stuff?

Maybe it is time to stop trying to keep up with the Joneses’ exhausting list of activities, and just let our kids be.

When that happens, we will no doubt be saner people. And, according to Esolen, our kids will be a lot more imaginative too.