Lately I’ve been thinking more about when to hold my kids close and when to push them to take risks and try new things, enabling them to gain confidence and to experience different horizons.

The author of Free-Range Kids, Lenore Skenazy, gained notoriety when she allowed her nine-year-old son Izzy to ride a subway home alone from a department store in New York City. Izzy wanted to do this, and Skenazy knew he was capable.

She equipped Izzy with a subway map, Metro Card, and some cash, including change to make a phone call home in case he needed it. He successfully made the trip home and was ecstatic about his newfound sense of competence.

When Skenazy related Izzy’s experience to friends and colleagues, she was met with incredulity and dismay. News outlets picked up the story and interviewed her. She was quickly labeled “America’s Worst Mom” for exposing him to such great risks.

“Childhood independence has become taboo, even though our world is no less safe than it was 20 or 30 years ago,” asserts Skenazy. “Crime is actually lower than it was when most of us were growing up. So there is no reality-based reason that children today should be treated as more helpless and vulnerable than we were when we were young.”

Why are modern parents so skittish compared to previous generations? One reason is the wide dissemination of very rare, yet horrific child abductions in the news media. A former TV news producer wrote on Skenazy’s blog: “I can tell you that news is all about fear. Sometimes, the first criteria we used when judging a story involving children or families was, ‘Is it scary enough?'”

Parents see scary news stories and then keep their children under lock and key, vowing that such a tragedy should never happen to their child. But what is lost in the process? Skenazy would argue that too much is lost. Statistically, there is only a one in 1.5 million chance that a child will be abducted and murdered by a stranger. Kids are 40 times more likely to be killed in a car crash than to be abducted. 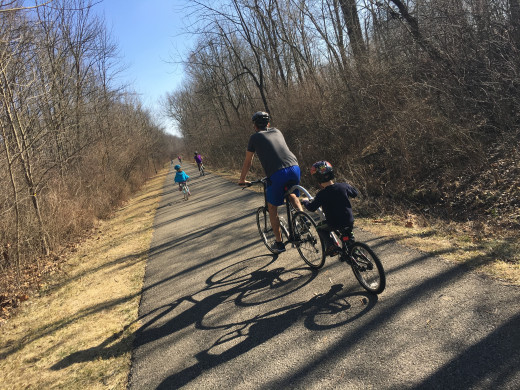 Previous generations gave children a wide array of freedom. The amount of restrictions modern Americans place on our kids is absurd in light of the average childhood experience in history.

As homeschoolers, our family has made choices that are counter-cultural. I was inspired by Skenazy’s bravery. She is fighting to raise her children the way she thinks is best, even though her views are not popular.

Although I am generally a free-range-parent, I also sometimes feel fear. I know what the popular view is, and this sometimes gives me pause. Even when I am not afraid of bad things happening to my kids, I do think about what other people will say when they hear about the freedoms my kids have.

One of our neighbors once mentioned to my husband that she noticed—when she comes home from work at 5:30 p.m.—our kids are “playing outside a lot…alone.” When I heard this, I thought, “Is that bad? They are playing outside ‘alone’ because I’ve been with them all day, and at some point, I need to actually get something done, like making dinner!” [Incidentally, our town was recently voted the safest town in the state.]

This is just an example of the modern mindset when it comes to child-rearing. I was encouraged by Skenazy to be even bolder and do the right thing for my kids, even when I know other people are questioning my decisions.

This spring I’m going to start letting my older two kids (ages 11 and nine) ride their bikes to the grocery store near our house and pick up a few things to bring home. I know they can handle this because I have taken the bike trail to the store with them numerous times, and I have taught them repeatedly about traffic safety. I am going to also let my seven-year-old go into the library by herself with my card, while I wait in the car, and let her retrieve and check out the books we have on hold.

Like Skenazy, I know my own kids. I know they can handle these things. It is time to give my kids a little more freedom, to prepare them for the big-wide world that is just around the corner.