I have a son named Carson. He is 5. He is a hot mess. And I couldn’t be more in love with him.

It has been one of the greatest joys of my life to watch Carson spend hours outside this summer. He is usually dirty and sweaty. He can most commonly be found by the pond in the back of our house, holding his net, and carefully inspecting something.

My husband says it’s the best $7.00 he ever spent, buying that net for Carson. It has resulted in endless hours of entertainment and diversion—for him, and us.

Between his net and his bug vacuum, Carson catches an average of about 37 creatures every day. As soon as I think he has discovered every small creature native to the Midwest, where we live, he comes back to the house with something new. His big sisters and I always apologize to the critters he has captured, whether they be tadpoles, minnows, crayfish, toads, turtles, or a variety of insects. We know that, statistically, their life expectancy has just plummeted. 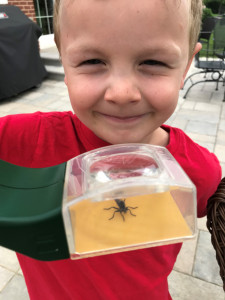 Carson, with one of his bug-catching devices.

We try to get Carson to put the creatures back in their own habits quickly, to avoid another senseless death, but we are not always successful.

Carson likes to bring all of these animals into our house. When we found a baby turtle in our landscaping, we told the kids to take it out to the pond and release it. A few days later we found it in a bucket, in Carson’s bedroom. It was hard to be mad at him. He just wanted a pet of his very own!

When he brought us a wounded bird, we told him to leave it alone and wash his hands. A few hours later, my girls found it in his bed upstairs. He was just trying to love on a wounded creature!

When he brought a few frogs into our house in a glass bowl, I set them out on the porch. The next morning they were dead. Carson blamed me for “hotting them to death” because he thought they died from the heat. 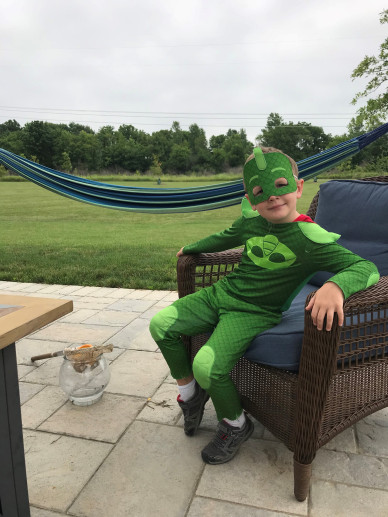 To the left, you can see the infamous net, a tiny frog, and a few tadpoles (in the glass bowl).

Carson has had to learn about consequences this summer. He spent several weeks catching wasps and bees with his bug vacuum. We warned him that he was playing with danger. Sure enough, he got stung on the finger and screamed and screamed.

I would like to say he no longer captures bees and wasps, but this is not true. Bees and wasps are simply too alluring for a 5-year-old boy to completely avoid. It is hard for a little boy to have self-control sometimes.

We were hoping he would learn more about consequences and self-control from the small allowance he gets. He gets $1.25 every week. Unfortunately, he can’t manage to save more than a few dollars at a time. The other day I noticed that his life savings amounted to about $3.00. Later that day, we went to our local children’s museum and played at an outdoor exhibit. As the kids were running around, I happened to glance at a nearby snack stand and saw Carson standing in line, pulling some cash out of his pocket. Unbeknownst to me, he had brought his life savings with him and was planning to buy something. He wanted Dipping Dots but it was $4.50. Gatorade was “only” $3.00 so he settled for that.

Yes, Carson spent his life savings on Gatorade. But that’s a boy’s prerogative, I suppose. It might be a while before he is able to completely master self-control. (Along with the rest of us!)

In the meantime, I’m just going to enjoy this rough-around-the-edges, wonderful boy. How I love him!