For Sandra Kim Yesawich, one of the best things about homeschooling during the pandemic has nothing to do with academics.

She’s thrilled that Emily, her 8-year-old daughter, has time most mornings to start the day doing something she enjoys—cooking eggs for the family.

That sort of domestic indulgence wasn’t really possible before the fall of 2020, when Emily and her brother Teddy, 7, attended public school and had to be out the door by 7:10 a.m. Their sister Yenna Elizabeth, 12, went to a classical Christian school, which involved a carpool and a bus ride.

“Homeschooling generally has been great,” Sandra said, “because we are together—reading together, cooking together, doing life together! It has been an incredible bonding experience, and I like having our kids around!”

Sandra, who works as director of media relations for Home School Legal Defense Association, is one of two moms we spoke with recently to learn how their plunge into a totally different way of doing education is working out.

Their surprising answers offer a window into an incredible trend that's not letting up.

Since the summer of 2020, most schools have been closed due to COVID-19, and many parents have become dissatisfied with distance learning programs offered as an improvised alternative. As a result, an unprecedented number of American students have started to homeschool.

This means parents have suddenly found themselves picking out their children’s curriculum, setting up a schooling schedule—essentially taking charge of what their kids learn and how they learn.

Middleton family gets some together time outdoors.

According to data gathered by the federal government’s US Census Household Pulse Survey, almost six million children were being homeschooled nationwide in February 2021. The most recent government estimate before that, in 2016, tallied just under two million homeschooled students in the United States.

In Wisconsin and North Carolina, two states that require families to file homeschool notices, the paperwork announcing the intention of parents to direct their children’s education from home last year roughly doubled.

Pivot and Then Pivot Again

Though the motivation for making this change no doubt varied, for Sandra and fellow Virginia resident Eve Middleton, much of it had to do with what was not working for their families.

“We didn’t want our kids on endless Zoom classes,” recounted Sandra. “We wanted them to be more active. Also we didn’t want the schedule to be dictated when we were all home and working from home.”

Eve remembers sharing similar sentiments with her husband when they started homeschooling their kids—Noah, 13, Noelle, 11, Brooke, 9, Giselle, 7—after trying to continue with public school online studies in the spring of 2020.

“My son was excelling in all his classes,” recalled Eve. “Once we switched to distance learning, he started failing. My kindergartner, on the other hand, was bored out of her mind.”

“With all the technical difficulties,” said Eve, “it was too much to handle.”

For both families, however, deciding to dive into homeschooling for the 2020–21 school year did not necessarily eliminate every anxiety.

Sandra and Eve both confessed to grappling with what and how to teach.

That struggle is what HSLDA educational consultant Vicki Bentley said is probably the number-one question raised by new homeschoolers. 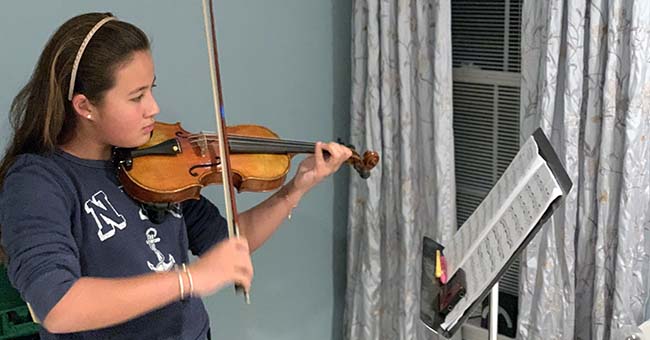 Elizabeth practices her violin as part of the Yesawich homeschool program.

For Eve, the problem became choosing from the wide range of available curriculum.

“It was overwhelming at first,” Eve said. “I was shocked at how much was out there.”

After asking around and viewing several online reviews, Eve eventually selected one curriculum for language arts, science, and history—and chose a separate online program for math. Later she added an election unit to coincide with the presidential race.

Sandra said she also talked to homeschooling friends and availed herself of the collective advice of HSLDA’s consultants before choosing curriculum, though she also admits “we definitely had to ‘unschool’ for a period of time.”

Getting the Family on Board

As it turned out, selecting teaching materials was only the beginning. Both moms then had to confront the challenge of teaching several kids at one time. (This is another subject Vicki gets asked about a lot.)

Put another way, Sandra and Eve said they quickly discovered that homeschool life also requires maintaining a delicate balance. They needed to adjust to reality without abandoning aspirations, all the while ensuring their children—each with unique needs and abilities—remained on track for meeting basic developmental goals.

Fortunately, it turns out the demands of homeschooling are also counterweighted by its saving grace—great adaptability.

“It’s definitely been a work in progress,” said Eve, reflecting on their school routine. When they first started, she recalled, “I was so excited and so eager, that I overbooked us a little. We’ve scaled back, and it’s so great to have the flexibility to do that.”

Eve noted that her son and daughter who struggled with full-time distance learning are now doing quite well in their studies.

Sandra, too, recounted how her family’s homeschooling has undergone adjustments.

For example, as she and her husband John both work, they often have to schedule school around their jobs. That has sometimes meant doing studies on Saturdays.

On the other hand, Sandra added, “You can take days off if you'd like. You can move the schedule as needed by the family and not the school calendar.”

As for academics, Sandra said they’ve been able to expand beyond core classes as their routine becomes more efficient and the children learn to be more self-directed.

“Our kids know to work on their own doing their workbooks, journals, or math games,” Sandra pointed out. But she’s also added projects they can enjoy together, such as fun science experiments and reading aloud as a family.

And there also have been opportunities for interaction outside the home, even during a pandemic. 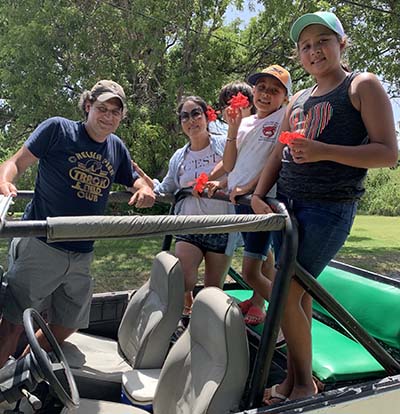 The Yesawich family pauses to make a memory.

Eve said she joined a homeschool group on Facebook, which she has found very helpful. Her children get together with cousins who live nearby.

And Sandra reported, “We have formed a neighborhood pod, and we have next-door neighbors that the kids play with almost daily. And they all do extracurriculars—tennis, violin, and youth group.”

Ultimately, both moms insist their kids are not just okay—they’re thriving.

Much of that has to do with the unanticipated benefit of homeschooling that Sandra is quick to express—the bonding and shared purpose it provides.

Eve and Sandra said they both love how their husbands have pitched in with schooling, mostly in math and science, and how their children have embraced the opportunity for taking on greater responsibility.

“I didn’t expect it to bring us closer together the way it has,” Eve admitted. “That was a really nice side effect of just doing life and school together.”

The big question is how long the two families intend to keep homeschooling. It’s a conundrum faced by thousands across the country as private and public school officials struggle to form plans to reopen.

As for her children, said Eve, “they want to continue doing it, which is a really good sign. I’ve been unwilling to commit one way or the other. I think we will probably stick with homeschooling because it’s such a good fit for us. I feel like we have so much more control—we can instill the values we have and specialize.”

Meanwhile, if anyone should ask her advice on homeschooling, Eve has an unequivocal answer.

“I would say go for it,” she insisted. “Especially in this climate, I feel the benefits outweigh what you might miss. It’s been a huge blessing for us.”

Note: All photos provided courtesy of the families.

We asked Vicki Bentley and other HSLDA educational consultants to tell us some of the questions they are hearing most from families who are new to homeschooling. Here they are, with abbreviated responses.

Q: How and what do I teach my children?

A: There are a wide range of assessment tools and curriculum available. You can start by having your children formally tested or by simply asking them what they are interested in (balanced against your own goals, of course). As for curriculum, the internet is chock full of recommendations. Cathy Duffy’s reviews are a good place to start.

For more on this topic, sign up for the HSLDA webinar, "How Do I Homeschool Multiple Ages?"

Q: How do I teach several children in several subjects at several levels?

A: Though you will most likely need to teach skill subjects such as math and language arts individually, you can combine other subjects for multiple ages to save time, money, and stress, and to encourage family unity.

Q: Can I homeschool my child who has special needs?

A: Absolutely! As the parent, you know your child best—including all their strengths and weaknesses. That means you do not have to be a trained special education teacher to successfully teach your child at home.

Q: If my child graduates from homeschool high school, will he have a future?

A: Homeschool graduates thrive in a variety of careers and advanced educational settings. They are often highly recruited by universities (with scholarships), not to mention trade and technical schools, apprenticeships, and first-responder training. Homeschool transcripts and diplomas are recognized by the military as well as by the US government for federal financial aid.  Even the NCAA works with homeschoolers.