The library archives are boring. At least, that’s what two of my kids informed me of one summer morning when I hauled them out of the house and to the library.

I’d discovered the archives section several months ago while researching for my novel. Housed in a small room on the basement level, the archives contained—among other things—census reports, genealogy records, local history books, maps, and back issues of the newspaper. I spent three full hours there and couldn’t wait to show the room to my kids.

And that meant a visit to our city library. Completed in 1913, the library is built with a central edifice and wings off each side to simulate the shape of an open book. Crowning it all is a green copper dome, the interior of which is inset with stained glass. The library was built to impress, and it delivers.

But down in the windowless archives room, my kids gazed skeptically at the filing cabinets, the bookshelves crammed with rows of nondescript hardback books, and the three weird computers. They did not share my excitement. So the first thing I did was lead them to the bookshelf where all of the area schools’ yearbooks were kept. I pulled out a 2019 issue and showed them that their friend Gracie was in the library archives.

That, they admitted, was kind of neat. Then Sparkler discovered that some of the yearbooks dated back nearly a hundred years. As she flipped through one with increasing interest, I sensed it was a good time to introduce what I consider the gem of the archives: the newspapers.

Gamerboy, still unenthusiastic, suggested we look up an issue from the 1920s. He added, “Around Christmas, so we can see if the advertisements were as insane as they are now.”

The archivist showed us the metal cabinet that contained every issue of the local paper since its inception, including one or two from the late 1800s. We chose June–December of 1922, and the archivist showed us how to thread the spool into the weird computer, which turned out to be a microfilm machine. Gamerboy took the seat in front of the screen, and Sparkler and I crowded around him.

The first thing we saw was an ad for a movie at the Empire Theater (now long gone). The movie was called The Prodigal Judge. Its tagline was, “I Am Shot—Good Bye” with the sensational chaser, “Has the man she loves shot her husband?” These two kids have a keen sense of the ridiculous. They expressed their delight at a very un-libraryish volume. I shushed them, and we moved on. 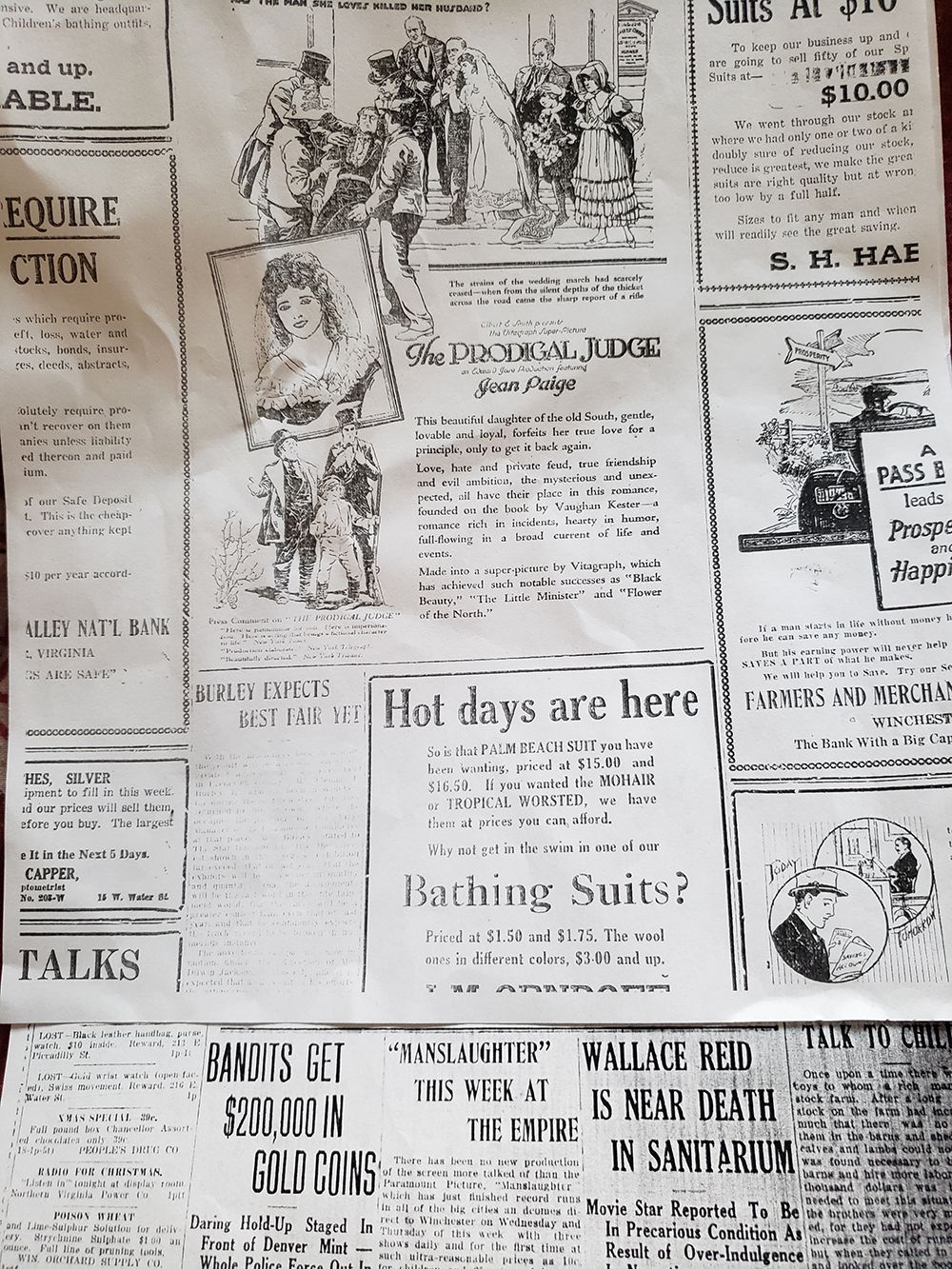 We scrolled through six months of bygone life. Headlines such as “BANDITS GET $200,000 IN GOLD COINS FROM DENVER MINT” were on the same page as “MR. GRATTON DIES OF PNEUMONIA AT HOME HERE.” Gamerboy and Sparkler giggled over the cheesy movies, got indignant over the unsubtle appeal to women to stay beautiful at all costs, and wondered why a raid of whiskey barrels made the news.

I swung into homeschool-mom mode: I looked up how much money $200,000 would be in 2019 terms ($2 million), pointed out that beauty ads still pressure women to be beautiful at all costs, and reminded them that this paper was printed during Prohibition.

Sometimes I interrupted their explorations to read headlines I thought were interesting. I got hot under the collar over a very short article noting the retirement of the first woman U.S. Senator in Georgia. The headline read, “WOMAN NOW EX-SENATOR.” “What if,” I demanded, “other headlines were worded this way?” Article on John Glenn’s successful return after orbiting the earth? “MAN NOW EX-ASTRONAUT.” Death of Supreme Court Justice Antonin Scalia? “MAN NOW EX-JUDGE.” My kids indulged me for a few minutes, but they were a lot more interested in an advertisement halfway down the page (“Some people are so dumb they think a football coach has wheels!”).

Gamerboy found the answer to his question about Christmas ads. They didn’t start appearing until late November and focused heavily on how affordable the wares were. ($2.97 for kids’ shoes? $15 for a new mattress? I’m convinced.) The holiday frenzy that we’re accustomed to now, beginning in October and running till New Year’s, was still in its incubation phase.

I finally looked at my watch. To my surprise, we’d been sitting there for an hour. With a slightly disappointed sigh, we rewound and put away the microfilm roll. 1922 disappeared into its little box, and we returned to 2019—including rushing out to make sure the parking meter wasn’t expired.

Gamerboy and Sparkler came home with a print-out of a few of their favorite pages. I came home with the glow of an educational jaunt that went even better than I’d hoped.

So as it turns out, the library archives are not boring. Just ask my kids.