It is a fairly well-recognized idea that the job of a parent in many ways parallels the job of a shepherd, at least figuratively. But in my last post, I discussed several ways in which the job of a stay-at-home mom is often literally like that of a shepherd. Life can be challenging for both the shepherd and the mother, but I believe this comparison should be encouraging to us. In my last post, I began a list of reasons why, and today I will give you the rest.

To review: the shepherding-mothering parallel should be encouraging to us because…

I don’t know about you, but when I look around at the amazing moms who work both in and out of the home, I can tend to feel inferior. It can be pretty demoralizing to hear about their accomplishments and then look back on your day and feel like you have nothing to show for it except children who have not starved to death or burned down the house. Sometimes I miss the satisfaction of a regular paycheck to show that my daily tasks actually accomplished something.

At times it can be difficult for me to feel that I am even capable of doing more than my work in the home. Although I did some part-time work before I had children and I still do a little work from home, I’ve never had what I would consider a “real job.” As I recently told my husband, it’s not that I’ve ever had a strong desire to be a “career woman,” but it would be nice to be able to say—and actually have some experience to prove—that I could have chosen that life if I’d wanted.

But when I’m tempted to look down on myself, I like to look at the story of David, the king who was once a shepherd boy. When Samuel came to anoint him, David was so far down the totem pole in his father’s mind that he didn’t even mention David’s existence until Samuel specifically asked. After his anointing, David didn’t immediately transition to being king, but went back again to his father’s flock. Then one day, he was doing nothing more important than running an errand when he heard Goliath’s challenge. Nobody believed that a shepherd boy stood a chance against the giant, but David knew he was capable of greatness in the strength of the LORD. And of course he did defeat Goliath and went on to become a great warrior, and later a great king. 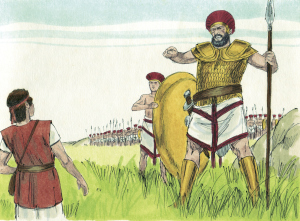 So if you sometimes struggle, as I do, with the feeling that your current humble duties are all you really can do, don’t believe it. It may not be God’s plan for you right now, but this is just one of many Bible stories that demonstrate that you are just as capable of greatness as anyone else.

4. You may in fact be preparing for greatness.

As I said of the shepherds of the Christmas story, I don’t know all the reasons why God chose David. But I think David’s background as a shepherd in some ways helped him to be a good leader of the nation of Israel. First, he certainly would have known the meaning of hard work. Perhaps his long hours of menial labor helped him develop humility, an important quality in a leader. Also, while his experience managing sheep is certainly different from managing a whole nation, it must have given him some background in being a responsible manager. Finally, protecting his sheep from predators required courage, which he also certainly needed as a warrior and later as a king. Of course it’s a little difficult to draw a direct parallel here—the odds are slim that those of us currently homeschooling our kids will later become President—but perhaps God has another purpose for the skills you are developing right now.

5. You can put your hobbies to good use.

Homeschooling doesn’t have to be all you do. Some of us may not have time for much else, but if you do, use it! David made use of his time in the fields with the sheep by writing poetry—which would eventually become the most widely read poetry in the world. We probably won’t ever beat that, but perhaps we can find ways to bless others with the activities we find enjoyable in our spare time.

6. The work you are doing now is very important in itself.

I may look at the example of shepherds like David and Moses, whom God raised up to become great leaders, but there were also many, many shepherds in Biblical times who never did anything more than be a shepherd, and that was still very much a worthwhile endeavor. Shepherds may have been looked down upon for their occupation, but it was still vital to the livelihood of civilization at the time. Sheep were a valuable source of life-sustaining commodities: cloth (wool), meat, and even milk. They were also important on a spiritual level, with the sacrifice of sheep being required to keep people right with God before the time of Jesus. People of that day may not have thought much of a shepherd’s work, but they still depended on it.

Likewise, we homeschooling parents are doing a significant work in raising up and educating the next generation. (See also this post.) We may not directly change the course of the world, but perhaps the work of our children will. One day their generation will be the leaders of this world, so we’d better do a good job of raising them to do it responsibly! And even if our own children don’t grow up to do anything particularly prestigious, both we and they can make a positive impact on the people around us right where we are. We may not feel like we are accomplishing much in a day, but what we consider to be “little things” often grow up to be big things, even if we can’t see or even imagine their impact right now.

These are some of the reasons I found it helpful to see the similarities of my job to that of a shepherd. I hope you find them encouraging as well!