With one year left before she graduates from high school, 18-year-old homeschooler Cailyn Pentecost already knows what it means to nurture exceptional talent—and face a devastating setback.

An advanced student, musician, and versatile athlete, Cailyn was poised to make her mark as one of the top track and field competitors in the country when she suffered an injury that left her unable to walk, or even stand.

That, said Cailyn, is when she developed a deeper understanding of what matters most in life.

Not that she was completely untutored in these things.

Family, ministry, and education have always been important to the Pentecosts, explained Cailyn’s mother, Laura.

Though Laura has taught in public school, and her husband Eric is in his 28th year teaching for the local district, they became impressed with the idea of homeschooling early on after getting to know a homeschool family in their church.

“Our first question was—is that even legal?” quipped Laura. But after learning more by attending a homeschool convention, they jumped in and started teaching their oldest son, Logan, before he was even in kindergarten.

They continued homeschooling Cailyn, their next child, and her younger brothers, Gabel, Jonah, and Micah. The siblings have excelled academically and engage in a wide range of activities, but according to Laura, another accomplishment her kids display especially gratifies her.

Sports have also become a major part of their homeschool.

Thanks to Indiana High School Athletic Association (IHSAA) bylaws, which say public school districts may allow homeschool students who enroll in at least one class to participate in extracurriculars, Logan lettered in several varsity sports at the local high school. He is now part of the football program at Hillsdale College in Michigan.

Cailyn competed in track—and set five records—at the local middle school. In the 9th grade she set a school record for high jump and finished 11th in the event at the IHSAA state meet. 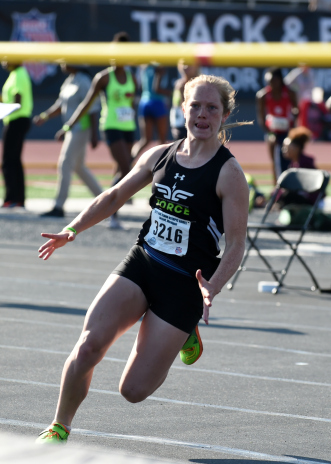 Gabel also competed for the local public school district—until officials changed the policy regarding homeschool students, “which is an entire story in itself,” says Laura. The siblings were able to continue in sports through club teams and travel squads.

In 2016, the summer before her 9th grade, Cailyn accepted a challenge to expand her athletic range.

“Because he saw she was good at a variety of events,” explained Laura, “her summer track coach really encouraged her to try out for heptathlon,” which combines sprints, jumping, shot put, and javelin.

The change did entail some adjustment.

Because they require mastering a particular form, said Cailyn, “the throwing events are way harder than I ever imagined.”  Running comes more naturally, she added, though the workouts can still be a grind, as confirmed by a common joke: “My sport is what other sports’ athletes do for punishment. I’ve heard that before.” 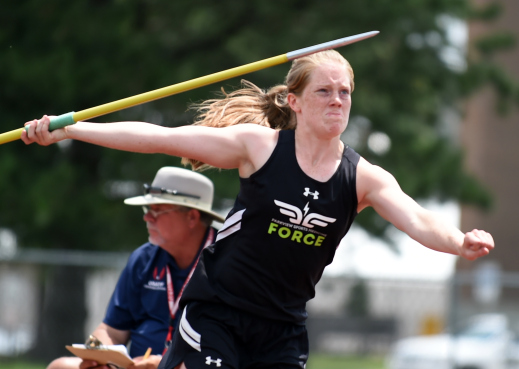 But Cailyn insisted she has come to enjoy the heptathlon, because “if I’m having a bad day in one event, I can do well in another.”

And she has had some pretty good days.

Her first summer competing in the heptathlon, she won her age group at a USA Track and Field (USATF) regional meet. This qualified her for nationals, but she missed the event in order to attend camp with Generation Joshua, Home School Legal Defense Association’s youth civics program.

In 2017, Cailyn won both the regional USATF heptathlon and the regional Amateur Athletic Union (AAU) heptathlon, qualifying for the national meet in both organizations.  She competed at the AAU Junior Olympics and placed 3rd in the nation for her age group.

During a routine practice with her club volleyball team in January 2018, Cailyn came down hard on her left leg, tearing a pair of tendons and tissue near the knee.

At first, said Cailyn, “I was in denial.”

But medical examinations showed the damage was severe.

After undergoing surgery in March, she began extensive physical therapy. For a while the pain grew worse, and her leg had to be kept locked into position.

“It was hard to sleep. Everything was harder,” said Cailyn. And progress came slowly, as the first tasks she worked on were simply standing and bending—“the things you take for granted.”

That’s when she found herself enrolled in the deeper lessons.

Cailyn saw her family rally around her. When she arrived home from the hospital, Cailyn found her brothers had decorated her room with inspirational quotes, Scripture verses, and photos of her competing in track.  Her dad posted more of these in her car.

Laura located a good therapist. “We were very blessed to find a place that understood sports injuries and could work to get her back to performance level,” she said.

Meanwhile, said Cailyn, “I focused on things I could control.” These included getting good nutrition, reading her Bible, and ensuring she treated others with kindness and compassion.

Laura said she could see the results of these efforts in her daughter.

“God is working on your character while you go through difficult things,” Laura said. “You may be improving in things you can’t see. You can learn a learn a lot of lessons.”

Cailyn agreed. Having dealt with the pain and disappointment of a major injury, she said, “I can relate more to people who have gone through tough things.”

So instead of centering her life around track and volleyball last summer, Cailyn followed other pursuits. She spent time with her family and sang and played in a band with her brothers at church. 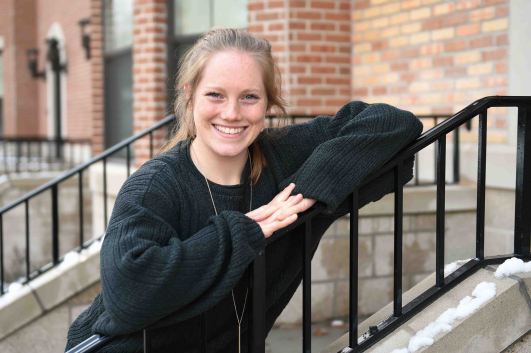 During the school year she supplemented her studies with college courses and began a job at an assisted living center.

This spring she returned to track, entering several open meets at area colleges. In May Cailyn competed in her first heptathlon since the injury, and she has joined a USATF team in anticipation of summer events.

“I’m still a little cautious,” said Cailyn. She makes sure her routines include stretching, warming up, and cooling down.

She would like to qualify for nationals. But ultimately, she hopes to keep her track skills advanced enough to earn her a college scholarship so she can study nursing.

After all, said Cailyn: “Athletics is fun, but it’s not the most important thing in your life.”