Cover image: Lacey Blamire's avatar welcomes visitors to one of the game communities she designed for the popular online portal, Roblox.

At age 13, Lacey Blamire is already helping to manage a café that services about a million customers.

The eatery and hangout exists only in the virtual world of Roblox. But the job requires real computer and graphics skills the homeschooler has worked hard to obtain, and entails a great deal of responsibility. She hires real-life gamers to fill roles as virtual cashiers and chefs for the online community, enforces the code of conduct, and designs virtual outfits for the other players.

Lacey first started exploring Roblox in 2020, when she left public school. Lindsay Kirsch, Lacey’s mom, said she started homeschooling Lacey and her younger daughter, Nora, now 12 years old, in the fall of 2020 after growing dissatisfied with the local district’s policies. Up to that time, Lindsay had resisted allowing her daughter to take part in the online gaming platform. 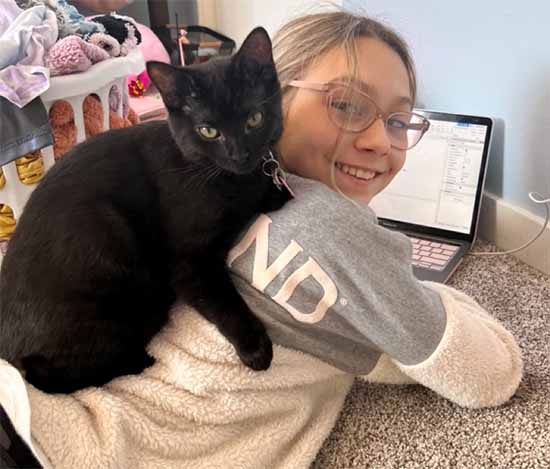 Lacey works on her computer with the help of the family cat.

But Lacey pleaded for permission, based on unusual circumstances.

“It was the first weekend the lockdown started because of COVID-19,” Lacey recalled. “All my friends were getting into it.”

The teen’s assertion is no exaggeration. Some tracker websites estimate that Roblox garners about 200 million players every month. One states that “about 50% of kids aged 12 years old and below in the United States have played Roblox at least once.”

One of Many Widespread Interests

But life isn’t all about Roblox. In addition to learning job skills, Lacey says that homeschooling has helped her thrive academically. For example, her mother recalled, Lacey used to struggle with math. Since she started using a curriculum that suits her learning style, Lacey has quickly advanced to studying algebra, and is now a year ahead of where she would have been in public school.

Homeschooling has also given her more time to pursue her interests—interests that, as Lindsay was quick to point out, expand past just computer games.

Lacey competes in a local gymnastics club and studies dance—mostly jazz, tap, and acro. In addition to competing, she also spends several hours a week mentoring younger students in both activities. 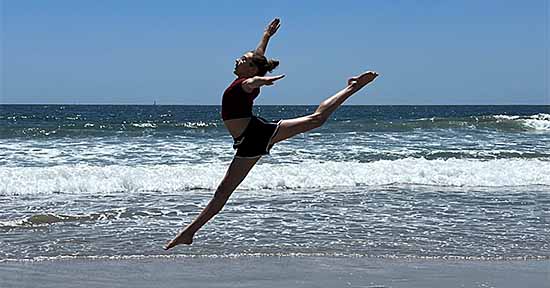 Lacey demonstrates one of her dance moves during a visit to the beach.

As for Lacey’s fascination with Roblox, it has become much more than a form of amusement. The commercial and creative aspects of the platform have inspired her to develop marketable skills.

The platform features an in-game commerce system and can be endlessly customized—often by the kids playing it.

In addition to designing her own Roblox community, Lacey got so involved in the café where she loves to virtually hang out that she ended up applying as an in-game administrator. The application process was extensive.

“We must have printed out thirty pages of documentation that she had to study,” recalled Lindsay.

Now Lacey is responsible for hiring real-life gamers to fill roles as virtual cashiers and chefs for the online community. She also enforces the code of conduct, which can result in her ejecting participants who violate the rules.

None of the gamers earn real dollars, but there is a brisk trade done using the currency of the game, known as Robux.

And Lacey has pulled in her fair share of Robux thanks to her own Roblox boutique, where she markets art and clothing players can buy to dress up their in-game personas called avatars.

To achieve this, Lacey first had to learn a variety of computer skills. She can now do some in-line coding, graphic design, and three-dimensional modeling using software such as Blender.

Lacey said her biggest sellers are custom-patterned pajama pants and sporty tops. One particular item of virtual clothing sold for the equivalent of 2,000 real dollars.

Of course, with so many people interacting and so many items of value changing hands, Lindsey said she recognizes that her daughter’s participation in the virtual world does entail some risk. So she tries to strike the right balance between freedom and protection.

There are some hard-and-fast rules, including turning off computers (and other connectible devices) at a certain time every day. Lindsey also monitors her girls usage from time to time and keeps copies of their passwords in case of emergency.

Lindsey says she does her best to prepare her children to independently make good decisions.

“I personally believe that when kids go out in the real world,” Lindsay explained, “I can’t protect them from everything. I try to be proactive and have these conversations ahead of time. I want my kids to be able to come and talk to me when they’ve made mistakes. We look at these things as life lessons.”

Lindsey added that she can’t help but be impressed by how online opportunities have inspired her daughter to learn.

For example, in addition to clothing and management skills, Lacey has also taken up designing virtual three-dimensional renderings of houses. Many of these are based on floorplans from a book of home designs Lindsay bought for her daughter.

“My go-to style is a modern farmhouse,” said Lacey.

Lindsay said that as soon as Lacey is old enough for freelance work, she wants to help her daughter post a portfolio of her designs to attract paying customers.

“It amazes me that she’s learning so many real-life things through this game,” Lindsay said. “I’m hoping she can earn some real money for what she’s doing.”

Photo credit: All photos courtesy of the family