What started as a boyish fascination with how tools are made is now the force that drives 15-year-old Brendan Crotty, who is heading once more to what his mother describes as the “Olympics of science fairs.”

For the second year in a row, Brendan won the regional science and engineering fair in his hometown of Muskogee, Oklahoma. His blue ribbon earned him a place in the upcoming Oklahoma State Science and Engineering Fair, as well as the International Science Fair to be held in May in Pittsburgh, Pennsylvania.

There, the 10th-grader plans to display his research on improving the fuel efficiency of industrial burners, which will be judged along with some 1,700 other projects by contestants from over 70 countries.

“I came up with my own design,” explained Brendan, “and this year I was perfecting it.” He added that he hopes his research will one day be incorporated into a commercial project.

Not bad for someone whose first foray into formal education left him underwhelmed.

As his mother Jennifer describes it, Brendan showed advanced proficiency from the time he was first enrolled in traditional school.

“He had skipped a grade, and it wasn’t working well,” Jennifer recalled. Brendan attended advanced classes, but “he was bored out of his mind.”

Brendan was 6 when Jennifer and her husband decided to homeschool him and his sister.

Even before then, said Jennifer, she could see her son developing an interest in science.

“I knew when he was 3 years old that he was going to get into engineering,” she said. “It’s definitely a gift.”

A Dream is Forged

Brendan’s specific penchant for metalworking grew from a visit to a Civil War re-enactment several years ago, where he saw a blacksmith at work.

“I just thought it was something fun to do,” he said.

By age 11, he was learning the craft and assembling his own vintage equipment: an anvil and a 130-year-old forge and bellows he pieced together from antiques. (The period clothing, apron, and tent are reproductions.)

At the Murrell Home, an antebellum plantation in the Cherokee Nation, Brendan has done a fair amount of metalwork as the tourist site transitions to a working farm. To help restore an antique plow, for example, he forged bolts from steel bars, drilling holes, cutting shapes, and fitting threads. 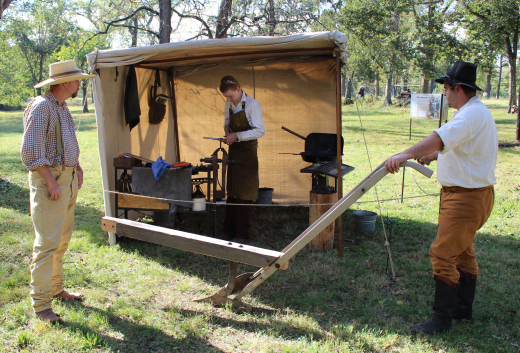 At the Murrell Home in Park Hill, Oklahoma during the Antique Agriculture Festival in October, 2017. Brendan is making a part for the plow.  He fully restored the forge in the photo by combining parts from multiple forges. He goes to auctions to buy his equipment and then he fully restores the pieces.

But blacksmithing was only the beginning. Brendan said his work with hammer and tongs over an open flame prompted him to think more deeply about heat production.

He learned welding and machining, and he started exploring electronics. Then, said Brendan, “I took over the garage, and just started building more and more stuff.”

That “stuff” included a propane-fueled burner and furnace, which he used as the basis for a series of regional science fair projects.

His 8th grade project, “A Comparative Study of Insulating Materials for a Gas Forge,” won him 1st place in engineering. His 9th grade project, “Building a Better Burner, Improving Forge Efficiency,” won best of fair for Division II, and qualified him for a trip to last year’s International Science Fair.

For this year’s regional fair, Brendan said he put in 800 hours of work over nine months. He used advanced equipment to determine how efficiently his burner was using fuel by measuring emissions such as carbon monoxide.

In addition to winning the senior division of the fair, this year’s project earned Brendan nominations for several honors, including the Arizona State University Rob and Melani Walton Sustainability Initiatives, the Ricoh Sustainable Development Award, Yale Science and Engineering Association Award, and the Office of Naval Research and Engineering Award.

So far Brendan is the first and only student from Oklahoma selected as a finalist for the Broadcom MASTERS national science fair competition. 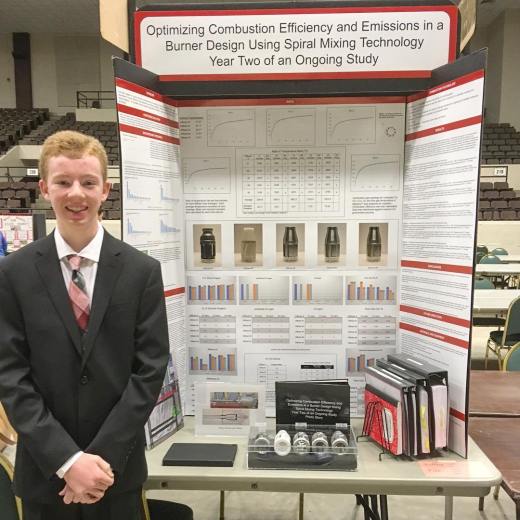 Brendan feels homeschooling has definitely accommodated his interest in science and engineering.

“It’s gives me a lot more free time,” he said, which he often spends in his home-built machine shop.

As for meeting the challenge of shaping a homeschool program to provide for a heavy emphasis on science and technology, Jennifer remarked, “there are a lot more resources out there than you realize.”

She said they’ve relied a lot on local libraries, colleges, labs and clubs. And as Brendan’s exploits have brought him into contact with more people, Jennifer said, “he gets help in places and ways that you wouldn’t necessarily think of.” For example, a local business offers Brendan a discount on plumbing supplies.

Besides, Jennifer added, with Brendan planning to take dual-enrollment college courses next year, “at this stage of the game I’m more of a facilitator. He really teaches himself.”

For his part, Brendan admits there’s much more he wants to learn. His goal after high school is to earn an engineering degree.

His advice to homeschool students who share his interests is to cultivate self-motivation.

“If you want to get into engineering or electronics,” he said, “just jump in. Buy a kit and start building.”