My mom didn’t know a lot about the blip on the radar called “homeschooling” when she embarked on the endeavor. With the amount of moving we did, it just made sense to try it. Since I was the oldest by five years, it meant that I became the guinea pig.

Turns out, at seven years old, I really became the guinea pig—for not only homeschooling but homeschooling overseas—when my family packed up me (at age 7), and my brothers (at 2 and at 6 months) and headed to China.

That most definitely was not the plan.

Never the plan if mom had stuck to her “I will nevers” list.

But life has a funny way of taking those lists of things we will “never do” and bringing them right to your doorstep. You step out one day on one of those paths, look back, and wonder how on earth you got there. That’s basically how it seemed to go for mom.

Here’s how it happened from my point of view.

I looked up one day from a quiet sitting room to see my adventure-loving dad burst into the room after a men’s retreat, all aglow, and talking excitedly about teaching English in China.

After mentally glancing, shocked, down the path dad was so excitedly illuminating, she adamantly, heatedly refused.

“How can you even suggest that—knowing I’m terrified of China?!” she demanded.

Well, she eventually grudgingly decided to think about it. She made a long list of her fears, and watched with a sigh as each one was methodically, mercilessly, decidedly answered over the next few weeks from the most unexpected places.

And so it began.

Months later in 2001, we found ourselves boarding the first of the five-plane, two-day trip to our new home. Little did we know that we were beginning the first year of a six-year adventure in the Far East.

In the hours between teaching English at a college in a “small” (by Chinese standards) town with a population of seven million, mom unloaded the stacks of books we had hauled with us, typed out schedules, and continued to homeschool through those years, providing some stability in the whirlwind of overseas living.

Grocery store shopping in China? Takes a whole new level of effort when it requires buses and taxis, navigating crowded aisles filled with strange new foods, filling up a huge backpack, and lugging it back across the city and then up four flights of stairs to our apartment. 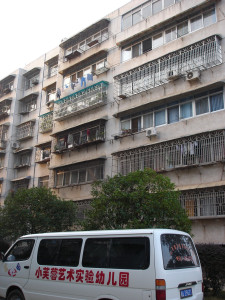 See our apartment with the blue awning up there?
Felt like the summit of Mount Everest to a little girl helping to carry groceries.

From the child’s point of view, let me tell you, there is a whole new fear-level in China. Holding onto the cart was a life or death issue from what I could tell, since if you let go, you ran the risk of being swept away in a bustling sea of Chinese faces and never seen again.

Then, there were the unexpected challenges, like trying to find pants for my baby brother without the Chinese-style split bottoms for their diaper-less kids. Or trying to figure out why my toddler brother suddenly burst into tears at the dinner table. (His chicken turned out to be the spicy type in a province that is famous—infamous?—for its flaming spices.)

For me, daily life in China brought an exciting but sometimes overwhelming uncertainty, like my unforeseen rise to popularity for simply being the little western girl. In the midst of that uncertainty, homeschooling meant stability and a tie to the United States when I was homesick. I have many fond and formative memories from our less-than-normal homeschooling life overseas!

One of my favorite memories is the books. Since books in English were hard to come by, they became all the more treasured. I am fairly certain I am a certified book addict now. Year after year, we created our own, well-loved library.

Thankfully, my homeschool curriculum (Sonlight) featured a fantastic supply of historical fiction books that we collected each summer break while visiting my grandparents in Montana. Receiving Nancy Drew books, craft books, or any-kind-of-books in the mail from stateside family made my day!

Homeschooling’s flexibility led to many cultural learning opportunities. It meant that I could easily incorporate Chinese into my curriculum or adjust my schedule to become a kitchen assistant to students who wanted to introduce us to authentic Chinese meals and practice their English. (If only I could have gotten school credit for dicing massive piles of garlic, ginger, and vegetables. At least I could eventually boast some skill with the mighty Chinese cleavers!) 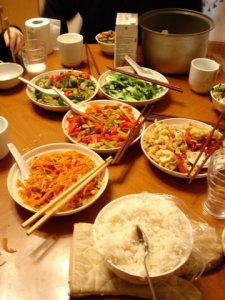 And what about sightseeing trips to places like Beijing to see the Great Wall or Forbidden City? No problem. We packed along our homework and books on the overnight train rides. Rare, if ever, was the time I wasn’t carrying around a book or craft with me on those trips. 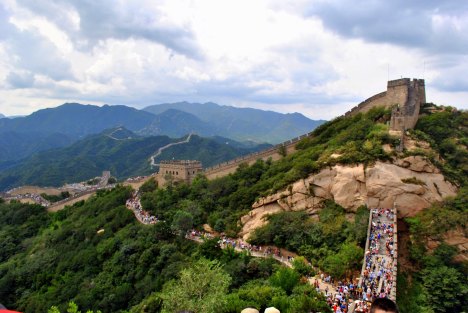 Mom also let me use some of my English Studies time to chronicle our adventures and send long letters home to family members who were eager for news. I developed a love for narration, reading, and history, which has continued to this day.

All that to say, life isn’t always how you pictured it, as my mom found out with suddenly raising three young kids in China.

Even if your life doesn’t have the obstacles my mom faced like playing Tetris with schoolbooks and duffel bags each summer, or finding the balance between teaching Chinese students and your kids, I know you have your own share of unexpected challenges, doubts, and sleepless nights.

Is it all worth it? From this guinea pig’s point of view, without a doubt.

P.S. Another moral to the story: Never say never. Unless you actually want it to happen. 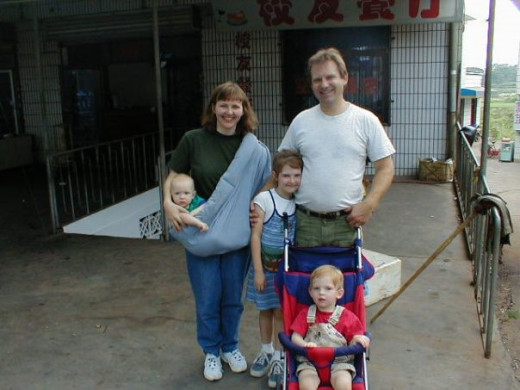 P.P.S. For fellow book addicts out there, here is a Chinese quote for you: