From distributing food to making masks—and just offering encouragement—homeschool families have been creative in finding ways to serve their communities during the COVID-19 crisis.

In order to cope with a global pandemic, Americans have been called upon to cultivate certain characteristics—flexibility, ingenuity, mindfulness toward health and safety, and concern for the community at large.

In other words, traits that homeschoolers have been developing all along and have exemplified during the present crisis.

The Wero family, who often homeschool on the road, responded to needs provoked by the coronavirus by firing up their recreational vehicle and traveling to New Mexico. There, they helped sanitize and pack food for distribution to families throughout the Navajo nation.

Chrissy Skelly and her two teenagers helped assembled 3,000 meals to give to children in their Ohio community who are normally served by the schools.

Many other homeschoolers have teamed up with co-ops, churches and various groups to create and distribute masks and care packages or just to encourage some of those hardest hit by the pandemic: seniors in group homes, health care professionals, and emergency workers.

Oh yes—they’ve also made sure their kids keep learning.

“We’ve transitioned beautifully from homeschooling to homeschooling,” quipped Julia Torcellini, reflecting on how, in the middle of the spring 2020 term, most of the nation’s students were sent home to commence online learning.

Her sons—Micah, who graduated this year, Isaac, a rising 11th-grader, and Benjamin, who is going into 6th grade—had already done a fair amount of online studies.

“So the learning curve wasn’t too steep,” added Julia. 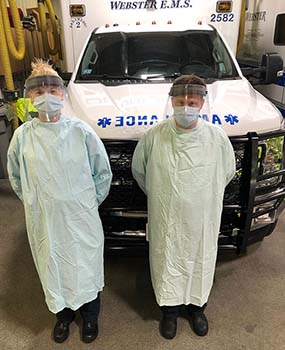 Something else that came naturally was a project to make surgical gowns for local health care workers and emergency medical technicians (EMTs). Working with her family and several members of her church, Julia organized the effort to craft the protective garments.

She said she heard about the need for masks from her mother but switched projects after speaking with a man at her church who leads a team of EMTs.

According to Julia, “he said ‘we don’t need masks, but we are almost out of gowns.’ You could tell he was very concerned about keeping his guys safe and healthy.”

“Within five hours of calling this guy,” Julia recalled, “I had fifty yards of fabric sitting on my porch and ten volunteers.”

She couldn’t find a pattern, so her sewers worked from a modified nightgown, altering the neckline and putting ties on the back.

Though each garment required a couple of hours to complete, said Julia, “we had 18 gowns done in a week. It just sort of happened. The unfolding of it was miraculous.”

Nonsewers helped, too. Several men volunteered to distribute the fabric and several women cut patterns. Isaac made a how-to video, which he posted online.

Isaac acquired his video skills thanks to a nurturing homeschool lifestyle that Julia describes as “a beautiful thing.”

She recounted how she and her husband Paul moved to rural Connecticut in order to be closer to his ailing father.

“By the grace of God,” Julia added, she and Paul decided to homeschool. Which meant that instead of conforming to an institutional educational regimen, their sons were free to explore the world from the sanctuary of their small farm.

One fun project the boys developed was a Groundhog Day weather forecasting event, except that instead of the eponymous mammal, the festival features a prognosticating duck.

Isaac videoed the annual event, which has earned a measure of fame for their small town. The brothers have had as many as 75 spectators turn out for the occasion and have been honored with a citation from the state legislature.

Julia said the fact that a skill her son developed to satisfy a personal interest could also be used to help during a health crisis illustrates a central aspect of homeschooling.

“You learn to learn, even though it’s not part a formal class,” she stated. “It’s a good system.”

Robotics Team to the Rescue

For the Neuman family in northern Illinois, the effort to provide hundreds of face shields and headbands to healthcare workers also developed out of a homeschooling activity—in this case, a robotics club.

Jennifer Neuman and her husband Warren homeschooled their daughters throughout their educational career. Emily, the oldest, is now attending Northern Illinois University. Abby graduated from high school this spring. 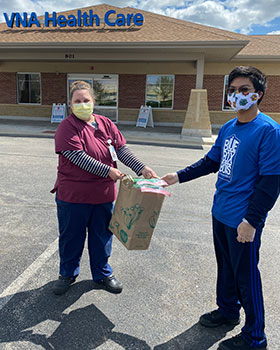 Joshua Roldan with the Blue Box Bots robotics teams hands off completed protective gear to a healthcare worker. Courtesy of the Neuman family.

Six years ago, Abby joined a newly formed robotics club that has included a number of other homeschool students. Her second year, she started learning computer-aided design, which inspired her and her dad to consider having the club create their own robot parts.

“So he bought one,” she said. “Then he bought another. And another.”

They ended up with four printers, which, combined with Abby’s design skills, meant “she became the go-to person for 3D parts,” quipped Jennifer.

The team's 2019–20 robots ended up including about 115 custom parts fashioned from 3D printers.

Then came COVID-19. The team was able to participate in the state robotics tournament in February, but the health restrictions that soon followed meant subsequent club meetings had to be held online.

“Abby’s very social, so this was very hard on her,” said Jennifer. “She just likes to hang with friends.”

But once the Neumans learned they could fill the need for certain safety equipment, they enlisted the help of their robotics club and others.

Warren downloaded templates for shields parts he found online. He also 3D printed a jig codesigned by Jennifer and the team’s engineering coach, Jacob Greenberg, so volunteers without printers could fashion parts by hand. 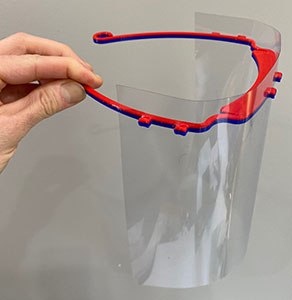 They started by building masks and head straps using printing filament they had already. Transparencies were purchased at office- and art-supply stores. Silva Eggers, a homeschooling mother of two team members, posted a message on Facebook about the project, which led to a donation from a stock of school supplies.

At peak production, recalled Jennifer, the team stayed especially busy, operating multiple printers at the same time. “Every hour and a half we’d run to the printers” to collect parts and keep the assembly line going, she said.

Ultimately, she added, it has been especially gratifying to find another way to employ their do-it-yourself homeschool ethos for the benefit of the community.

“It’s been interesting to see how people have come together to do what they can,” Jennifer said.

A Service to Customers—and Kids

For John and Katie Dehnart, whose lives merge homeschooling, business, and ministry into an integrated whole, the pandemic simply offered another way for expressing their family’s outlook.

John was homeschooled by his parents, who helped pioneer the movement in Ohio—and were involved in drafting state legislation regulating home education.

The Dehnarts display some of the customized products available from their family-run business. Courtesy of the family.

“I was the experiment kid,” John quipped in recalling those early days of homeschooling. “As the oldest, I got to try everything out. Some things worked, some didn’t.”

One thing that definitely stuck was a project John and his sister launched in the mid-1990s after completing a school assignment to make a flyer for a local farmer.

“We showed our mom and got an A,” John said. So he and his sister agreed to go into the printing business. “We decided, maybe we’ll get some work out of this,” he added.

Now John and his wife Katie are running that same business: CrossTimber. And they are homeschooling their own children—Joanie, 14, Chloe, 12, and Rigby, 8. There’s also 3-year-old Henry and another child expected in November.

John said that, like his own parents, he tries to involve his kids in the family enterprise—which specializes in personalized gifts based on the recipient’s name and its traditional meaning.

“They learn their ABCs by alphabetizing my bookmarks,” John remarked.

Like so many other Americans, the Dehnarts saw the pandemic affect their business. They were planning to promote a personalized cartoon that Katie had narrated, but sales fell off as the uncertain economy prompted families to focus on essentials.

John said that instead of worrying, they decided to give.

The Dehnarts had created an activity pack—25 pages of kid-friendly games, puzzles, and handwriting exercises—to send to customers who had purchased the cartoon. The packet was meant to provide purchasers something to enjoy while they waited for the main product to be customized.

John opted to make the packet available for free.

He offered it through local groups, his church, and the state homeschool organization, Christian Home Educators of Ohio. About 700 copies were downloaded.

“We got a lot of great feedback,” John recalled, so he contacted Home School Legal Defense Association. HSLDA posted a link on social media, which led to requests for 5,000 downloads—each customized with the name of the child.

“We’re up to about 2,200 names,” said John, a total that includes some unusual monikers. “Today we got Phoenixx—with two X’s.”

He admitted it’s been a scramble fulfilling the orders but added that he doesn’t mind. Even if it does require some extreme customizing.

“Everybody has been super happy with this,” John said. “People with unique names are the most delighted to see something personalized.”

He explained that being able to bless others during a major crisis really seems like an outworking of how he tries to approach every endeavor in his life, including business.

“The real heart of why we’re doing this is our service to Jesus,” said John. From this point of view, he continued, treating customers well is really just a means of adhering to some of Christ’s most profound admonitions: “Love each other as I have loved you.” And “what you’ve done unto the least of these, my brethren, you have done unto me.”