At age 7, Ted Morin began his education at the kitchen table, with his mother jotting down teaching highlights as a reminder of what he needed to learn. Today, he’s working on his PhD.

Using technology he hopes to improve—the internet—the 26-year-old carved out an hour recently to talk with HSLDA about his journey from being a homeschooled kid in Massachusetts to his current occupation, studying lasers for a doctorate in the physical sciences. 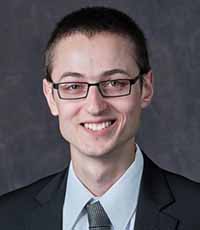 Homeschool graduate Ted Morin is working on a doctorate in lasers.

His path to an advanced laboratory on the California coast took many varied and interesting turns. And in speaking with him, it’s clear that his education focused at least as much on producing an earnest and compassionate human being as it did on attaining academic success.

Ted is the fifth of six children, not all of whom were educated at home. He started homeschooling in the 1st grade.

By middle school, Ted showed aptitude for science and especially math, though he insisted that his mother would say that he hated the latter subject. He explained that it takes him an unusual amount of time to work problems and solve equations because he likes to savor what he considers the aesthetics of math.

“It’s tidy and beautiful,” he said. “It’s hard to cut corners. Taking the time to do it right is very satisfying.”

When a student like Ted demonstrates readiness to learn at a very advanced level, homeschooling parents in most states are free to choose from a variety of options to meet their student’s need and personality—private or public, tutor or classroom setting, online or in person, self-paced or live. In 8th grade, Ted was so far ahead that his parents discussed more advanced learning opportunities with him, and he began taking math and biology at the local public high school. The next year, Ted’s parents asked if he wanted to transition to public high school full time, but he said no.

Part of his reasoning was that not all the courses he took at public school seemed a good fit. He recalled, for example, how the pace of a geometry class prevented him from pondering aspects of the topic that intrigued him most, whereas the study of proofs seemed stifling because he’d already delved into formal logic in his homeschool.

On the other hand, he said, “it was very easy at home to just be engaged.”

Doing high school at home, however, in no way curtailed his opportunities to explore additional interests.

Ted competed on the public high school swim team and played French horn in the school band. He also performed with several other local orchestras and ensembles, including a few that toured Europe and South America. He earned Eagle Scout honors, helped repair donated laptop computers for needy families, and won medals thanks to high scores on the National Latin Exam.

He did confess to an ulterior motive for this last accomplishment.

“I had an agreement with my dad that if I did well enough on the competition, I wouldn’t have to take Latin class the next year,” said Ted.

By the end of the 11th grade Ted had already taken introductory college courses through an online program offered by Stanford University. He was ready for pursuits beyond high school.

So his parents awarded Ted a high school diploma at age 17, with the caveat that he find something productive to do during what would have been his senior year. 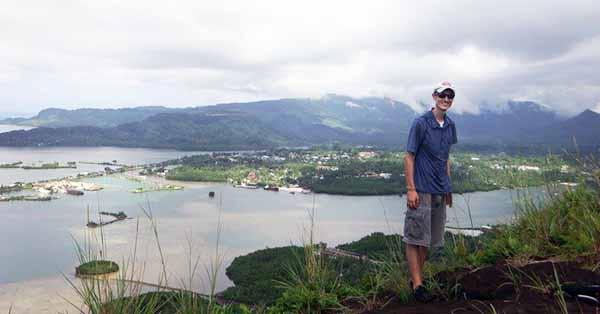 Ted refused to settle for anything mundane. Through contacts at the Jesuit Volunteer Corps, which places young people in service opportunities in several countries, he reached out to a high school in Micronesia. The school needed a math teacher, so Ted applied.

That’s how Ted ended up spending two years on Weno, an island in Chuuk Lagoon, located about 600 miles southeast of the US territory of Guam.

Though his first term as a teacher involved grappling with the disadvantages of being inexperienced and a foreigner, Ted said he nevertheless enjoyed his work, his students, and colleagues.

“Everybody I knew there was generous, patient with outsiders, and showed a lot of goodwill,” Ted recalled. And the setting was glorious. “You can’t beat the sunset on a southeast Pacific island,” he said.

Upon returning to the United States, Ted enrolled in the University of Dallas and pursued a double major in math and physics. One of his summer jobs landed him at Sandia National Laboratories in New Mexico, which would prove pivotal in directing his further education and career path.

But first, Ted wanted to be sure he wasn’t intended for a higher calling. After earning his undergraduate degree, he enrolled in seminary and began studying for the Roman Catholic priesthood, but left after a semester.

Ted’s family encouraged him to continue his scientific studies. So at the recommendation of former colleagues at Sandia, Ted applied to a doctoral program at the University of California, Santa Barbara.

Interestingly enough, Ted pointed out, in applying for acceptance at such a high academic level, his homeschool diploma was never called into question. He said he believes his college record and the hands-on experience he gained through summer jobs showed that his homeschool accomplishments were no fluke.

Besides, he said that at the graduate level, “they’re hungry for anyone they know who is willing to do the work.”

So just what is Ted working on? He hopes to help design more precise and efficient lasers. The practical application includes making it significantly faster for people to do things like send emails or pay bills online. 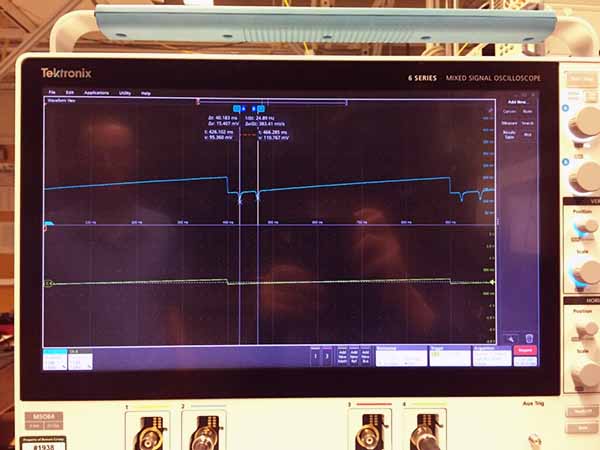 Ted Morin catches his own reflection and that of a colleague while photographing data from testing lasers.

As Ted describes it, his doctoral project continues work he did at Sandia Lab. There, he constructed a piece of metal with a triangular cavity that could be manipulated to measure wavelengths of light—which can also be expressed as specific colors.

This research can be used to make lasers that emit beams in a very narrow wavelength (which again could be measured as a particular color). This in turn could be employed to send more information between computer servers than is possible with current infrastructure.

Or, as Ted explained, “our job is to make the most boring lasers possible, that use the smallest amount of power, so that other people can do exciting things with them. They’re not the Death Star.”

Even so, Ted said that he’s very happy to be striving for a career in science, though he added that he constantly reminds himself there are more things to life than earning a living.

“Your interaction with other human souls is more important than your work,” he noted. “Though we also do our work in order to benefit the people we care about.”