Games tend to fall into two general categories: the fun ones, and the educational ones. It’s a rare game that manages to combine the two elements.

But let me tell you about Headhunters.

Our family was asked to play-test this game. We don’t know the developers and hadn’t heard anything about the game, so we received our prototype without any extra knowledge to go on. Just the cards, the instructions, and our fun-hungry kids.

The premise is that players “hire” historical figures for various jobs, attempting to collect the highest salary to win. Gameplay is very similar to a family favorite, Apples to Apples. One person reveals the available job—which could be anything from lifeguard to veterinarian to bull rider—and also reveals up to four salaries. Players look through the cards in their hands and choose the historical figure they think best fits the job. The “headhunter” ranks the “clients” by salary, the fortunate players collect their money, and the round moves on. 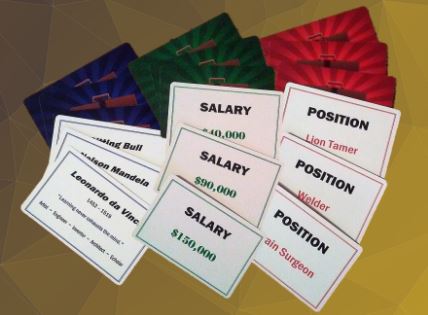 The fun comes from the bizarre mismatch of people and jobs. Our family put in a lot of energy arguing why Aristotle would make a great veterinarian, or how George Washington Carver is perfect as a brain surgeon, or the benefits of Joan of Arc vs. Richard the Lionhearted as your personal bodyguard.

Our two older kids knew most of the historical figures. Our younger ones quickly learned basic information about them. Alexander the Great . . . he was an emperor, right? So he’d be good at bull-riding because he obviously rode horses! Mark Twain . . . he wrote books? Then obviously you’d want him as a teacher, probably!

(An added element in our family is that some historical figures almost always win because “it’s funny.” Rasputin and Karl Marx were shoo-ins because of a couple of internet jokes that our middle two kids love to quote.)

The kids asked to play the game at least four times over the weekend that we tested it. Since our version has a limited deck, the names and jobs became repetitive. The full game, with many more names and jobs, promises a lot of replay value.

On the downside, sometimes the jobs and available characters are so mismatched that it doesn’t make sense. Also, the game is heavily text-based and does require some historical knowledge to appreciate. A personal problem was that I had trouble keeping track of how close I was to the winning $1 million salary because the salary cards have lots of zeros; I usually just waited until the end of the game and then used a calculator to add them up.

Overall, however, Headhunters manages the rare feat of being both fun and educational. I am very sure that Plato would approve of this “ideal form” of a game. But Harriet Tubman would approve more, because she appreciated well-designed plans! Hey, no, definitely Ghengis Khan, because he loved winning. . . .

Sorry, this decision is going to take some time . . .