The Brainy Bunch: The Harding Family’s Method to College Ready by Age Twelve chronicles the homeschool journey of the Harding family and their overall philosophy of home education for their 10 children.

Each of the Harding children was homeschooled and then started attending a local community college at around the age of 12. The Harding kids completed undergraduate degrees before most kids typically finish high school. 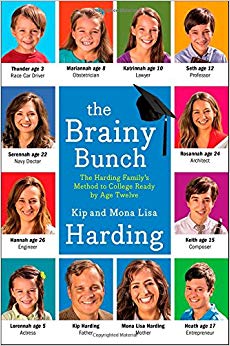 I was intrigued to read the Hardings’ book, but my first thought was a skeptical one: “What is the rush?” That is probably the first thought most people have, because 93-percent of people surveyed by the Today Show disagreed with the Hardings’ choice of starting children at college so young. Childhood is already so fleeting, so why push kids to enter the adult world so early?

Because the Harding kids started college at 12, you might think that the Harding parents are type-A and strict, but I got the opposite impression from their book. They seem like a very fun-loving family and the mom, Mona Lisa Harding, seems particularly laid-back and warm. The Harding children, like pretty much every homeschooling family I know, had lots of time to play and explore their interests because they were not bound to a traditional school schedule and structure.

It seems to me that the Harding kids were able to be college-ready by age 12, ironically, because their mom was so laid-back. Mona Lisa Harding simply majored on the majors and let everything else go. She had a busy life with so many little children, moving constantly with the military, and trying to work part-time when possible. The Hardings essentially just focused on math, reading, writing, and college-admissions testing.

Math: The kids were encouraged to do two math lessons a day and their dad, Kip Harding, was actively involved in helping to keep the kids on track with math and to inspire them to figure out complicated math problems from a fairly young age. They also homeschooled year-round, so this likely helped the kids accelerate in math.

Reading: Quality books were a central part of the Hardings’ homeschool day. The kids studied history and science by reading lots of books on those subjects. After these books were read, they were also encouraged to read lots of books for leisure and fun. The kids were never required to read anything that they weren’t interested in.

Writing: The kids were required to write something every day, even if it was just a journal entry. Rather than studying formal grammar, the Harding parents would look over their kids’ writing and discuss grammar rules during the editing process.

Test-Prep: The Harding family never took standardized tests. Instead, they focused from a young age on getting their kids ready for the ACT/SAT exams and had their kids take these tests early and repeatedly if necessary. Kids can take these tests and elect to have their scores go unreported, so that takes the pressure off of the kids, and they can simply take the exams for practice. 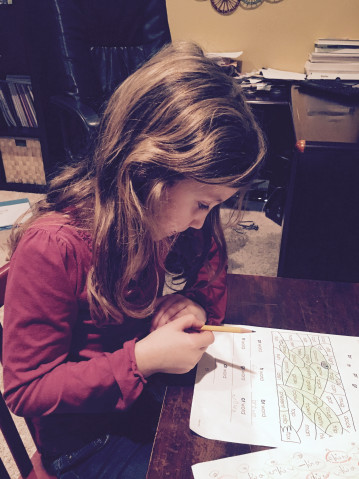 Contrary to what you might think, the Harding kids are not geniuses. Their parents simply focused on the important things, let everything else go, and worked diligently to help inspire their kids and cultivate their kids’ individual passions and interests, so their kids were self-motivated to pursue college at a young age.

The Harding family believes it makes sense for kids to not waste time in high school in social settings that are often not helpful and in taking classes that don’t count toward their future degrees. Instead, they want their kids to be purposeful and to be earning actual college credit to get a jump-start in life.

So many homeschool parents—and I am definitely one of them—have agonized over science curriculums and English grammar curriculums. While I think it’s good to carefully research curriculums, it’s also interesting to see a family with such a laid-back approach who has achieved so much.

Whether or not you or I agree with sending kids to college at age 12, I think everyone can agree that it is refreshing and inspiring to see this family’s love for learning and to see children with so much vision and initiative.