A couple of years ago, we took our kids to the zoo for the first time for my son's second birthday. Since my girls and I are currently studying land animals—and because my youngest daughter’s birthday was coming up—this spring seemed like the perfect time for a return trip. With two trips to the zoo now under our belt, I thought I would share a few (not-so-expert) tips for enjoying a field trip to the zoo with your own kids!

Check for teacher/student discounts or specials. The most significant difference between our first trip to the zoo and our second was the cost. That’s because I discovered that homeschoolers can get into our state’s zoo for free! All I had to do was call at least 2 weeks in advance, give them the name of our state-registered homeschool, and let them know who was coming and when. Admission was then free for me (the teacher) and my girls (school-age children). We had to pay for my husband and preschooler, but that’s still a nice savings versus last time when we paid full admission for everyone!

Bring your own food. This one is kind of a no-brainer for the frugally-minded, but you will save quite a bit if you bring your own food instead of buying food at the zoo. Also, although the posted signage seems to indicate that all outside food and drink is prohibited, I discovered later that the website says you are free to bring along your own non-alcoholic beverages. I guess I didn’t need to worry about the bottled water I “smuggled” in!

Now that you’ve saved some money, budget a little more for special extras. I didn’t realize on our first trip that there are several different activities within our zoo that don’t necessarily include seeing animals in an exhibit! There is a carousel, paddle boats, a 4-D theater, a ropes course, and more. Since we had our hands pretty full with just trying to see the animals, I didn’t bother with any of these, but I did make sure to set aside some money for feeding the giraffes (now $3 per person). With more people there, we were not able to spend as much time with the giraffes as last time, but we were fortunate that they showed up just at the right time and we did get to feed them again. The kids all said this was one of their favorite parts of the trip, so I’d say that was $12 well spent! 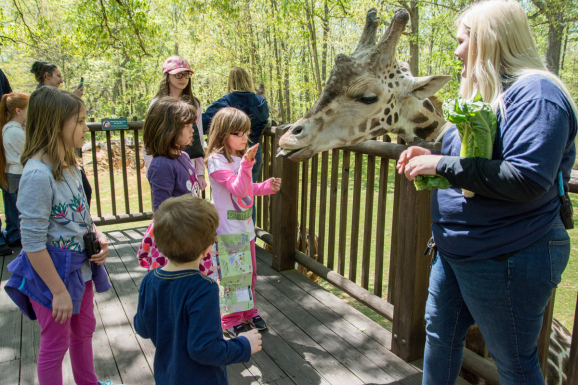 Don’t worry about seeing all the animals. The other thing the kids loved most was climbing on some hippo statues near one of the picnic areas. Yep. We came to the zoo to see all the real, live animals, and they probably could have played on the stone hippos for an hour. They were also talking the whole time about wanting to play on a playground near the polar bears, something we took time for on our last trip. Admittedly, it is a pretty cool playground (the equipment looks like giant plants, so you can pretend you’re the size of a bug), but I was determined to see the few animals that we’d missed on our previous trip. We told the kids we might make it back to the playground at the end, but one thing led to another, and we ended up having to rush through the last few animals a bit just to get them all in before closing time. Nobody complained too much, but in retrospect it probably would have been more fun for the kids to skip the grizzly bear and play on the playground instead. Also, I discovered my previous comment about the zoo being “not huge” was highly inaccurate, as the North Carolina zoo is apparently the largest (in area) in the world! So yes . . . seeing all the animals can take a lot of walking and be pretty exhausting! 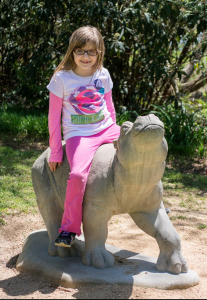 On a similar note, when the kids are really enjoying a particular exhibit, take your time with it! Many of the exhibits can be rather boring—alligators and bears may be cool to look at, but it’s not very exciting to watch them sleep. So when you catch a particular animal that’s really active, make the most of it! We spent a fair amount of time with the gorillas again this time, and it was fun to listen to the chimpanzees and lions putting up a racket for a few minutes.

Avoid crowds, if possible. Our first trip was on a cloudy Monday in late September, and there were very few other people. Our more recent trip was on a sunny Friday in late April, and there were school groups everywhere. It wasn’t bad, but there were a few exhibits where our kids had to wait a few minutes to be able to see the animals through the crowd. I don’t really know when schools typically do zoo field trips, but I’m guessing they are more likely to happen near the end of the school year versus the beginning, and the same is probably true for the day of the week. Duly noted for next time! 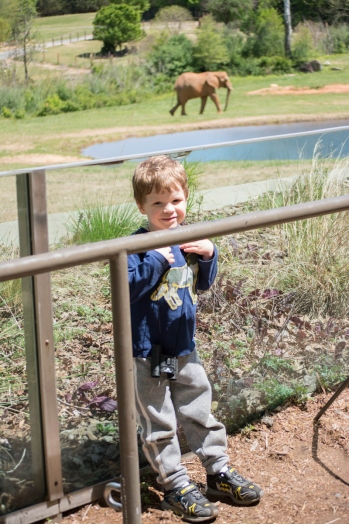 Bring binoculars! On both trips to the zoo, the rhinos were so far away from the observation point that you couldn’t even tell what they were. There are binocular stations in which you can deposit a quarter and look for a minute or so, but for this trip, I found several pairs of cheap binoculars for $5 each at Walmart. Turns out they give a closer view than the paid stations anyway! The girls enjoyed being able to see several of the animals in more detail.

It was a long day, but we had a great time at the zoo once again! It was a fun way to review and solidify several of the things we had learned in science recently, as well as celebrate “Sweet Pea’s” birthday. I am looking forward to another return trip before too long, even better prepared than last time.

I hope these tips may help make your zoo field trip more enjoyable as well!

Our Monkeys Visit the Zoo