As homeschool parents, it can be difficult to get away from the kids even when we’re not supposed to be “sheltering in place.” Since adding a little boy to our family last fall, my husband and I have only had a real “date night” once, and even that one involved the (rather attention-hogging) baby. I knew we were both craving some time together without the kids, so as our wedding anniversary drew near, I texted one of our regular babysitters and set up a time for us to get away for a few hours.

Well, that was in early March . . . and our anniversary is at the end of March. You can guess what happened to that idea when the entire world shut down.

It was time to get creative. For some time, I’d been thinking about having a date night at home. This is an idea that I’ve heard mentioned when couples have trouble finding or affording a good babysitter, or for whatever reason just can’t find the time to get away. The way I’ve usually heard this idea presented is to have dinner or watch a movie together after the kids go to bed. Our kids, however, are in the habit of going to bed just before we do, so that doesn’t work very well for us.

Our kids are getting old enough now, though, that they can manage themselves pretty well even if they aren’t quite old enough to truly babysit. (Our oldest is just shy of 13, so we’re almost there, but not quite to the point where we feel comfortable leaving an infant behind for a few hours.) We do occasionally leave the baby with the older kids and play a board game or spend some time talking in the other room, which I think somewhat counts as a date. We are frequently interrupted, however, and that would be rather anticlimactic for an anniversary date.

One night a few days before our anniversary, I had a sudden inspiration: I could make a restaurant at home, recreating the place where we had our first date. My kids are always playing restaurant, and my middle daughter loves to cook, so I figured they wouldn’t mind helping me pull this off. They also had to help me clean up, of course, but I may have sweetened the deal by giving them the day off school and promising them a little monetary compensation (still a lot cheaper than a “real” date!). And since we were making it an “official” date, they all promised that they would actually leave us alone for that time, which I hoped would give us at least an hour.

After settling on my theme and planning a menu, I got the additional idea in my head to create a photo collage of every year we’ve been together as a couple. This was the most time-consuming part of the project as I had to go through hundreds of digital pictures. I started a few days ahead, but unfortunately didn’t get to the printing stage until the morning of our anniversary. Thankfully, the photo printing at our local pharmacy was still “essential” enough to be available, and so I picked up the photos and arranged and pasted them onto construction paper. (Note: This takes a lot longer than you think. . . . I do not recommend leaving it until the last minute. Also, I realized I should have used card stock as I’d originally planned: damp photos like to curl, and construction paper doesn’t hold its shape. Oh well.) 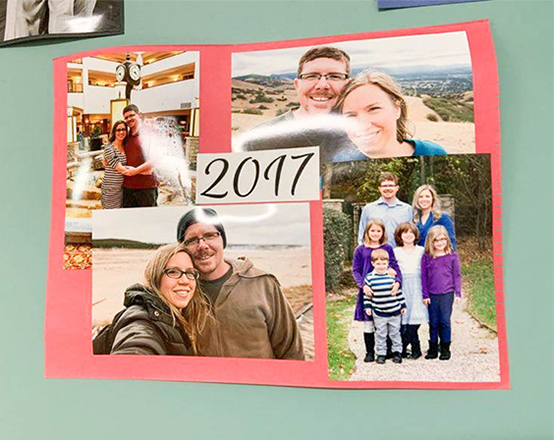 Meanwhile, the aforementioned daughter got to work cooking some of the food on my menu. She ended up cooking about half the food. I definitely could not have pulled off my photo decoration plan without her support in the kitchen! 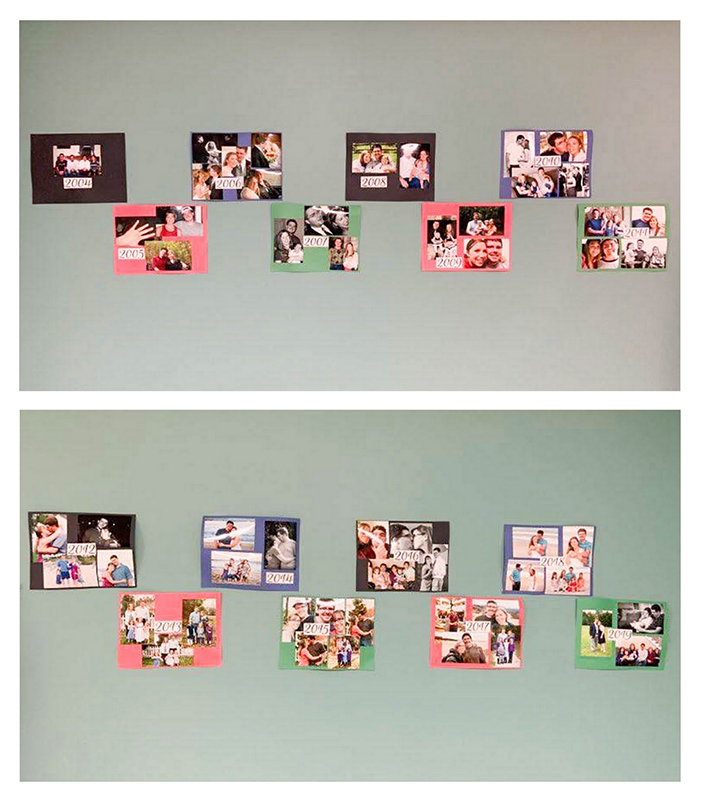 The kids were also a big help with cleaning and setting up our restaurant area in the basement. They cut, colored, and set up our restaurant signs and helped me tape the photo collages to the walls. They helped set our table and a little “hostess stand” for the restaurant as well. Then they all changed into their server “uniforms” while I finished up in the kitchen.

I should probably mention that my husband is an “essential” worker and was fortunately out of the house this whole time. He arrived home before we were quite ready, however, so I directed him away from the surprises with a note at the door, which briefly explained that I was “taking him out” on a date and told him to dress accordingly. 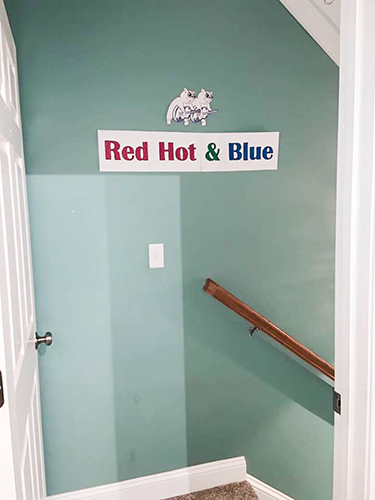 Before too long, we were ready: restaurant set up, food prepared, me prettied up, and even a playlist of memory-inspired songs prepped to play off my phone (free on YouTube if you don't mind commercials!). I fetched my husband, and the kids may not have been the only ones with goofy grins on their faces as we led him into the “restaurant” and greeted him at the “hostess station.” 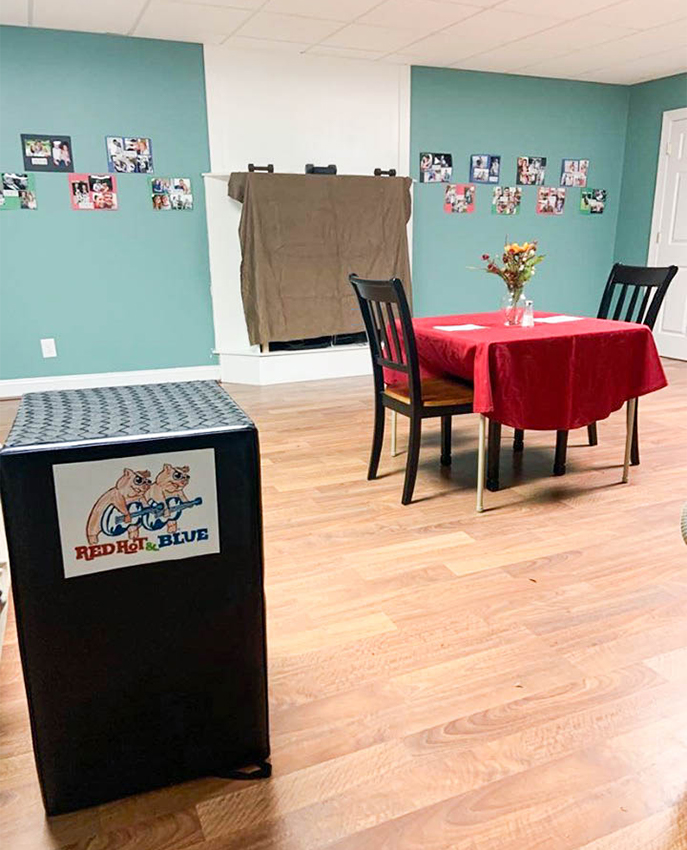 My oldest then took the baby upstairs, my assistant chef became our waitress, and our youngest daughter served as the “busboy.” As agreed, the kids stayed completely out of the basement except for bringing our food and checking for refills at regular intervals. My husband and I were able to have a nice meal and uninterrupted conversation in our own house—imagine that!! Then we spent a little time looking over the photos and generally taking a walk down memory lane. 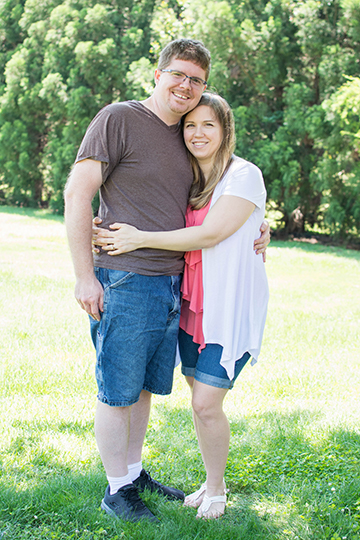 As for the kids, they got to watch their favorite things on TV, play restaurant, and get a few bucks out of the deal. In short, I think we all enjoyed ourselves! It was a bit of work to prepare, but as I said, the photo project took the most time and wouldn’t have to be replicated in the future. I think we will likely do this again sometime!

I relied heavily on my preteen children for this particular date, but at-home dating can certainly be done other ways. It could be something as simple as eating a takeout meal together after the kids are in bed, or while they watch TV in the other room (maybe find a reward to give them if they stay put and don’t interrupt!).

Have you ever had an at-home date? How did you do it?

Life in the Time of Quarantine

Life in the Time of Coronavirus: How to Stay Rooted in a Time of Upheaval

Love in the Time of Quarantine