The girls and I read an adorable history book. It’s Margaret and the Moon: How Margaret Hamilton Saved the First Lunar Landing by Dean Robbins and illustrated by Lucy Knisley. It checked off all my must-read boxes:

I saw Margaret on somebody’s blog and reserved it at the library. Sometimes random internet recommendations work better than others, but we were still excited to read it when it came in. At least, I was. Certain persons claim space travel is “boring.”[*]

The cover art was respectable. The girls accepted Margaret as being potentially readable, as opposed to those tricky nonfiction things that claim to be books but obviously aren’t for reading. The end-page art showed the same girl looking at the moon out her window, which was at least good enough that nobody ran away before the actual book began.

Margaret the character made friends when she appeared. On page two, she felt that half the spiders couldn’t be Daddy Longlegs, but had better be Mommy Longlegs. This conversation is also a thing at our house. Okay, she can stay. On page 4, Margaret was solidly beginning on addition, subtraction, multiplication, and division. Why, we have a girl doing that. 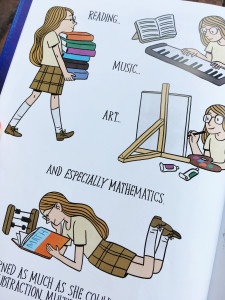 Margaret went on to talk philosophy with her dad, gaze at the night sky in wonder, and measure things with cute numbers. She graduated to complicated math, which I earnestly hope we shall also do someday, and discovered computers.

At this point, we paused the story for a conversation about ancient times when computers really did take up an entire room and didn’t have any games programmed on them. Also, there was no internet. Given that I regularly fit three computers loaded with games and internet access into my purse, the girls are somewhat doubtful, but we generally do tell the truth.

In 1964, Margaret joined NASA on their Apollo project to send people to the moon. I liked this page because one of the NASA guys illustrated looked a lot like my father-in-law when he worked there. I wonder if the illustrator did her research? It gave me warm fuzzies, and Jonathan and I pointed him out as Popi.

I appreciate the details in these illustrations. One of the piles of printouts on Margaret’s desk is on that old style of paper with a tear-off row of holes along either side for the computer to process. Do you remember those? When I was very little, Dad would bring that kind of paper home for us to use as scratch paper.

The illustrations also integrate pictures of Margaret’s code…which is total gobbledygook for those of us who are not software engineers. It kind of makes my brain hurt. I want to get my dad’s take on it, whether it looks familiar to him. 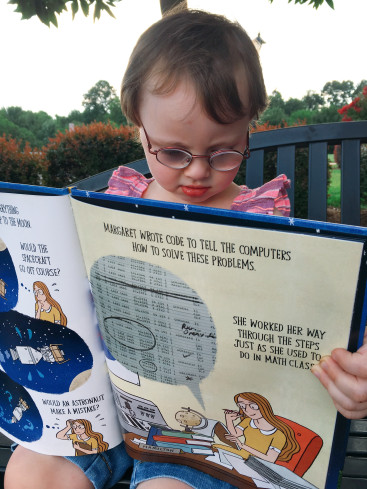 On the page where the Eagle lunar module had an alarm go off right before the landing, the book talked about the clever fail-safes Margaret had programmed in. Jonathan told stories of what the alarm looked like from Mission Control’s perspective.

At this point, the book gives all the credit for getting people to the moon to…Margaret? For real.

I’m pretty sure it was a team effort, actually. One of the things I love about a lot of children’s books and shows currently is the emphasis on friendship and teamwork to accomplish great things. I’m really disappointed that Margaret and the Moon downplayed that aspect, because that’s one of the very coolest things about early NASA: all the remarkable and heroic people who worked together and did something amazing. So while Margaret does a lovely job bringing one of the characters to life, it manages to make the lunar landing story very incomplete. I would not recommend using it as a history book without adding a couple of others by way of corrective. 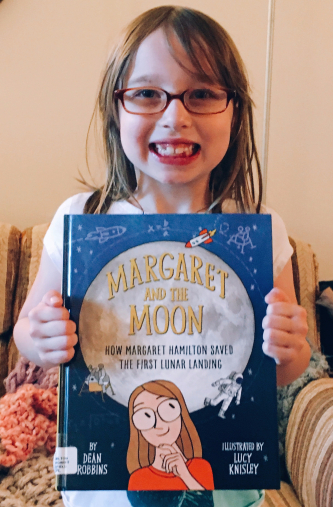 So. That being said, I still love this book. It suits us down to the ground. I may buy it. And Meg liked the book well enough she carried it off to bed with her.

[*] This opinion is not allowed.

Photo Credit:First image: iStock. All other pictures courtesy of author.