Dozens of homeschooling parents, along with their children, made the trip to the New Hampshire House of Representatives, one of the largest representative bodies in the world, to show their support for a bill that makes improvements to the education law.

Key aspects of the bill would recognize that homeschooling parents direct their child’s education and that learning does not always have to happen  at home. The bill adds the words “coordinate and direct” to recognize the reality that the education of a child at the direction or coordination of a parent very often involves outside programs such as co-ops and other groups . An amendment proposed by the bill sponsor that is expected to be adopted would also remove rule-making authority from the state Department of Education. More analysis of the bill can be seen here.

“I want to take the opportunity to thank all our homeschoolers here today,” Education Committee Chairman Rick Ladd said.  “I’m seeing some from the age of two to three and I’ve seen a toddler also ….  I just want to compliment you on what you’re doing here. And this is a unique program in our state, and its been very successful as well.” 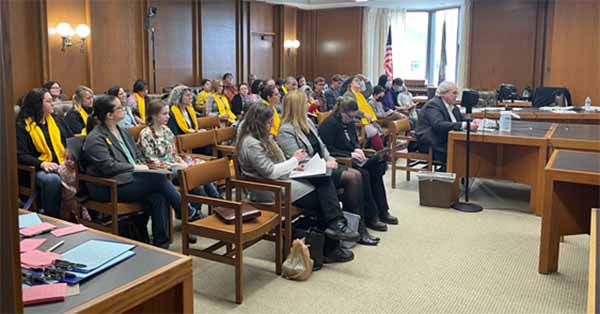 Families gather in the New Hampshire House of Representatives to speak in favor of a bill that would improve homeschool law. Many are wearing yellow scarves in support of school choice.

HSLDA has long supported the removal of this rule-making process, in which administrative agencies added regulations to deal with what they believed were gaps in the law. Because the homeschool law has been simplified over the years, these rules are no longer necessary. This point of view is also shared by the current Commissioner of Education, Frank Edelblut, who is a homeschooling parent of seven.

“New Hampshire's home education laws are clear, understandable and accessible to anyone who might read them,” he said. “The clarity of NH RSA 193-A relative to home education programs means that we do not need separate rulemaking authority. The legislature has given us all the guidance we need to implement the program.”

It was great to attend and testify at the hearing and see the homeschooling children and parents representing our community so well. I was raised in New Hampshire and was involved in homeschool advocacy there even prior to starting my work as an HSLDA Attorney. 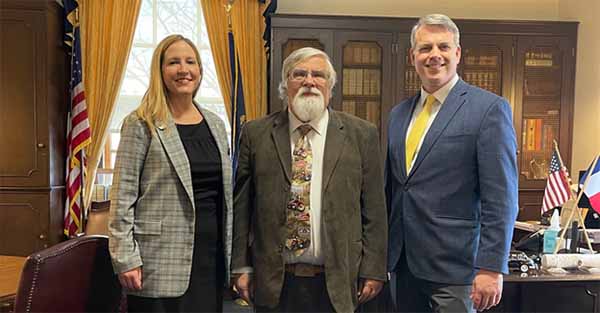 I have participated in every legislative action since 2004 relating to homeschooling in the Granite State. It was a real privilege to be back after some years, addressing the Education Committee in support of this helpful legislation.

Testimony can be viewed at the YouTube channel of the New Hampshire General Court (what they call their legislature) here. The homeschool bill testimony starts at time stamp 2:00:21. My testimony can be seen from 3:13:00 to 3:16:35.

Support from Legislators Who Homeschool

Representative Erica Layon, a homeschooling parent, is the primary sponsor of the bill.

“It has been ten years since we have made changes to the homeschool [statute],” she said. “The pandemic has increased the number of families homeschooling, and we need to make sure that our laws are responding to the needs of this growing community. I am pleased to offer these helpful clarifications that will make homeschooling more available to our fellow citizens.”

She added: “I am very thankful for the work of HSLDA, along with our state organizations like Granite State Home Educators, which I helped start. We have a vibrant community, and these changes will reflect the good work so many parents have been doing with their children.” 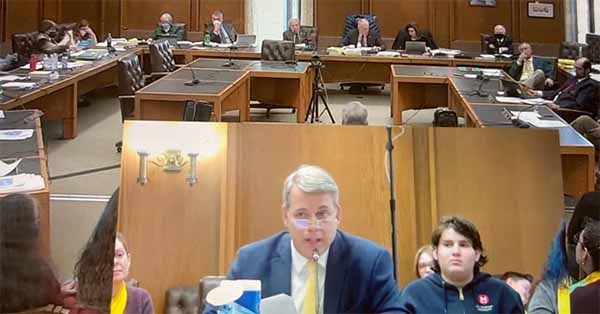 The author of the last major change to New Hampshire’s homeschool law also spoke in support the proposal.  Representative J.R. Hoell was the sponsor of H.B. 1571, which among other significant improvements made New Hampshire a one-time notice state.

Several homeschooled students who attended the conference also testified. One spoke in particular about the proposal to remove the requirement that homeschoolers  score in the 40th percentile or higher on a nationally normed achievement test to demonstrate “reasonable academic proficiency.”

“I don’t believe that homeschoolers should be held to a higher standard than students from other schools, and there should be special protections for those with educational differences,” she said. ”Homeschooling has been a great blessing to me to allow me to explore my gifts … while also strengthening my academic abilities. Please pass H.B. 1663.”

Some speakers pointed out that many kinds of students who receive state funding do not have statutory achievement requirements like the one for homeschoolers.

Granite State Home Education founder Michelle Level told the committee that she, too, cared about equity for homeschoolers.

She pointed out that other students can opt out of, or are not required to take such tests, even though they receive government funds. This isn’t fair, she said.

Time for a Change

In the last 20 years, more than 20 states have eased unreasonable or unnecessary bureaucratic burdens on homeschool families.  Research continues to suggest that homeschooling produces good academic and social outcomes for children. Proposals like Representative Layon’s recognize that parents are ultimately responsible for the education of their children. It is appropriate for state legislators to enact bills like this that empower parents to homeschool.

For nearly 40 years HSLDA has worked hard to make homeschooling possible. We support the work of advocates like Representatives Layon and Hoell, and homeschool leaders Levell. We thank you for your support of HSLDA, which allows us to provide support, advice and grassroots communication to keep homeschooling freely available to anyone who chooses.