Dangling by her fingertips several feet above an out-of-bounds water pool, Isabella Wakeham realized that if she wanted to win this round, she would have to execute a quick dismount that she’d never attempted during competition.

And if she failed, the television cameras would capture every split second of the ensuing splash.

How did she end up in such a predicament?

From Gym Class to Network TV

It was a homeschool connection that helped land Isabella and her friend Lauren Hotchkiss—who are themselves homeschooled high school students—on the first season of American Ninja Warrior Junior (ANWJ), now airing on Universal Kids network.

The two could be described as a proteges of homeschool graduate Daniel Gil, who turned his own passion for physical performance into a means for training and inspiring young people.

“One of the great benefits of homeschooling,” Daniel explained recently, “is that our parents got to tailor our individual giftings into our schooling.”

His interests included singing, dancing, and athletics—a combination that drew him to Christian ministry and to a television show that featured competitors pitting their skills against a set of grueling (and sometimes quirky) obstacles.

After graduation Daniel took a job with Iron Sports gym in Houston, where he could train himself and others for the types of feats performed on American Ninja Warrior, the adult precursor to ANWJ.

Since then Daniel has not only appeared on the show—he’s qualified for the finals several times, most recently for the 2018 Las Vegas competition.

His interaction with younger homeschoolers has expanded as well.

When he started ninja-style training for homeschoolers at the gym, “it was only one class about once a week with 10 students,” recalled Daniel. “Now it’s four days a week, with back-to-back classes. It’s been a blessing and an incredible honor.” 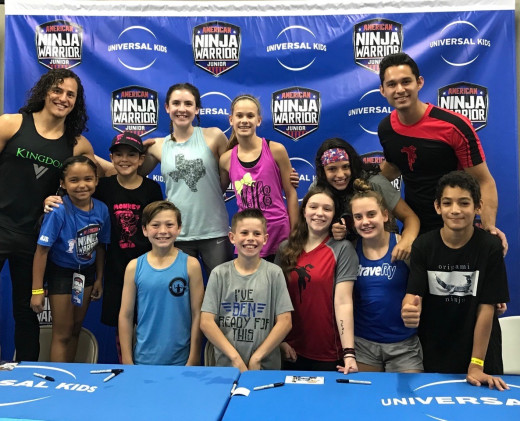 Among the homeschoolers who connected with Daniel and Iron Sports gym were Lauren and Isabella. The two forged friendships with three other teens, who dubbed themselves the NinjaGirls Fab Five. 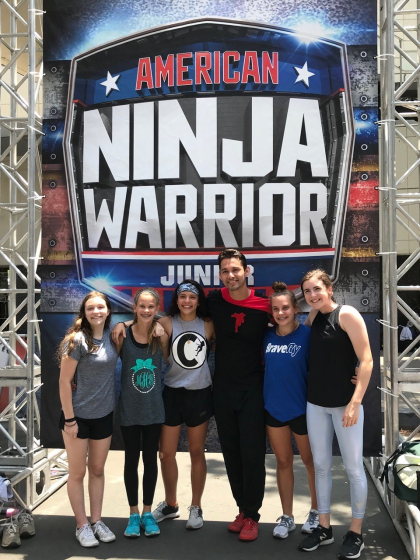 Left to Right: Lauren Hotchkiss, Molly Haywood, Celena VanHaezebrouck, Ryleigh Rodgers, and Isabella Wakeham (with Josh Salinas in the middle.) Under the tutelage of Josh Salinas, these girls have created a team that supports one another and cheers each other on even though they are competitors!

Isabella said the training did more than transform her physically; it changed the things she was able to do outside the gym and how friends and family perceived her.

Because of how many of the ninja obstacles are designed, she explained, “we do a lot of upper body conditioning—lots of pull-ups and push-ups.” 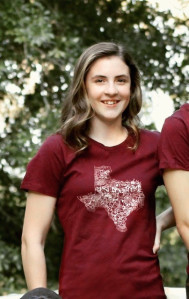 “A lot of my friends’ houses got flooded,” Isabella said. “I could handle unloading heavy equipment, cases of water, and sheetrock stacks. I loved surprising the guys who didn’t think that a young girl like me could carry much. It was really neat to see what started as a hobby turn into something I could really use to help people.”

Isabella also developed into a fierce competitor. At the finals for the National Ninja League tournament last year, she finished third in her age group.

But dreams of competing on television seemed years from fulfillment.

Then came casting calls for the debut of ANWJ. Isabella, Lauren, and their friends submitted lengthy applications as well as videos showcasing their athletic abilities and personalities. Out of 9,000 entrants, each of the NinjaGirls Fab Five qualified for the show.

The quintet trained under coach Josh Salinas, also a veteran of American Ninja Warrior, and by mid-July found themselves in Los Angeles in front of the cameras.

Unlike the original show, in which contestants pit themselves against the obstacles in solo runs, ANWJ upped the drama by matching pairs of youngsters in races to the finish. Like the adult show, however, contestants were disqualified if a misstep sent them tumbling into the water below.

“I was paired up against two boys who were so fast—incredible athletes,” recalled Isabella.

As for Lauren, her greatest challenge was displaying the grit to compete after an untimely injury.

“About a week before we left I dislocated my shoulder,” said Lauren. “I cried after all of my runs. I was in a lot pain.”

She still managed an impressive win, which was aired in Episode Eight.

Isabella, meanwhile, fell just short of qualifying as a semi-finalist. She vividly remembers her dramatic win over Nathan Nix.

“I was very aware of my opponent,” she said. Coming out of the next-to-last obstacle, consisting of three hanging cylinders with narrow handholds, “we were side by side.”

On the last cylinder, instead of swinging again to gain momentum for a lunge at the final platform, she performed a quick dismount that she had done in practice, but not in competition.

“I’d never done it on anything like the shelf grab,” she admitted.

The move gained her just enough lead to scramble up the curved wall and slap the winner’s buzzer first.

Ultimately, though, there was much more to the experience than races and obstacles.

When they weren’t taking part in the weeklong taping of the show, the girls toured a few Los Angeles area landmarks, such as Muscle Beach.

But, Isabella admitted, she and her friends also didn’t mind that performing for television allowed them to bask in the limelight a little.

“The crowd was amazing,” said Isabella. “I’ve never had that many people cheering for me, and that really made me go fast.” 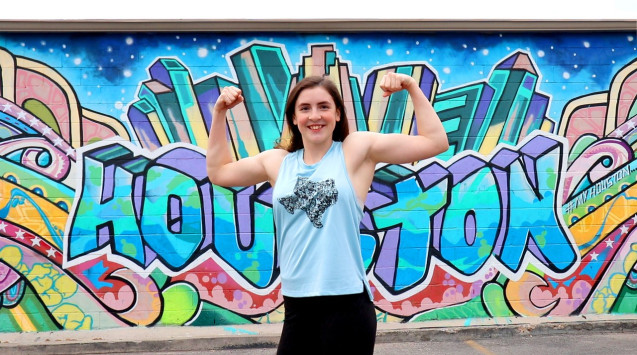 She especially enjoyed sharing about her family’s hurricane relief work, as well as chatting with the hosts after a winning run.

In those moments, Isabella said, she realized: “I’m here. This is what I’ve dreamed of for so long.”

Now that the first season of ANWJ is winding down its initial broadcast, it’s back to more everyday concerns.

While Lauren has planned to give her shoulder time to heal, Dan and Isabella have stepped up preparations for upcoming competitions.

That preparation, according to Daniel, includes insisting his charges focus on training and not their newfound celebrity.

“Their coaches keep them humble,” he said. Mostly, he reminds students that even the best competitors can slip up and suffer the ignominy of ending their run, not at the finish line, but in the water.

“Everybody gets wet sometime.”