Another season is heading my way: the season of teenagers. Another shift in my thinking and responses is in order.

This is why parenting is so hard. Just as soon as you get a handle on one season—or it feels like you do—that season is over and a new one begins. For example, it took me more than a year to feel like maybe I could parent a baby, and then my firstborn started walking and became a toddler. A new learning curve began.

Recently I started feeling a little disconnected from my 12-year-old daughter. I felt like all I was doing was correcting her—and some of it was really stupid stuff that is mostly inconsequential—and she was getting more silent and pulling away a little bit.

Truthfully, my daughter Meredith has had 12 years to hear my opinions, so she probably already knows what I think on virtually every topic known to mankind.

It is time for me to stop talking so much and to listen more.

I will be honest. I am a little scared about having teenage daughters. I don’t know if I will be any good at it. I want my girls to know I love them. I want to be a better listener.

“Meredith, would you like to go with me to Cracker Barrel?”

The idea of me going with her to Cracker Barrel was a really odd one because the two of us never go away and eat a meal out together. Her dad takes her out sometimes on a little “date” but I never do.

We both love Cracker Barrel pancakes with their crispy edges. We also like to sit by the roaring fire on a winter day.

So we went, and we had the most delightful time. My goal was to say nothing to her about her future, her behavior, or to give any advice on anything at all. My goal was to 1) just listen to what she wanted to talk about and 2) to enjoy spending time with her.

I think those are the best things you can communicate to someone you love and want to build a relationship with—you want to understand them and you really enjoy just being with them.

One problem I have had in listening is responding to my kids’ emotional outbursts with the facts, immediately pointing out why they are wrong and why they should stop crying.

Whenever a child comes to a parent and is emotional about something (shows any type of emotion), that is not the time to make sure the facts are all squared away. That is the time to stop and listen carefully.

“Don’t confuse facts with feelings,” says Gary Chapman in his excellent book The 5 Love Languages of Teenagers. “Parents often get into arguments about facts and ignore feelings.”

“Ignored feelings do not build positive relationships between parents and teenagers.” (Wow, this quote really made me think.)

Listening to truly understand where a person is coming from and affirm their feelings is called empathic listening. I’ve read about empathic listening skills in various books, but I think Stephen Covey is the one who famously summarizes it in his book  The 7 Habits of Highly Effective People.

1. Calmly repeat exactly what the speaker has said. Doing so forces you to listen not just hear, and lets the speaker know you’re paying attention.

2. Rephrase the content or put what was said into your own words.

3. Reflect feelings or make a non-judgmental statement about the speaker’s emotions. This reiterates to the speaker that you heard what he said and empathize with how he feels. (Example: “I can understand how you would be frustrated/angry/sad because of that.”)

It hit me like a ton of bricks: I will never have a close relationship with my kids (or anyone) if I don’t communicate that I understand how they feel and I respect their feelings. The facts can be taken care of later, after the child’s feelings have been affirmed and they have calmed down.

I’m not a touchy-feely person, and it doesn’t come naturally, but there is too much at stake to not validate my kids’ feelings and help them have healthy relationships—with myself and others—by expressing their feelings.

I’m going to try my best! Thankfully Cracker Barrel is there to help me, when needed. 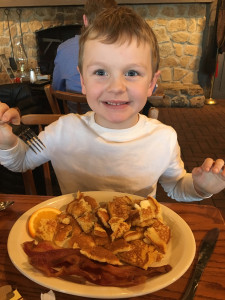 A few weeks after taking my oldest daughter to Cracker Barrel, my son asked for a date too. I couldn’t resist.