History was never my best subject in school. To me, it was often a tedious struggle to remember names and dates. But I did still learn a good deal about certain periods in history, and that was mostly thanks to historical fiction.

One of my favorite historical subjects turned out to be American Revolution. Granted, I didn’t know a lot about the political or military side of things (also tedious), but thanks to sources including the ones below, I could tell you a fair amount of trivia about the Boston Tea Party and Paul Revere’s “Midnight Ride.” In addition to stories I heard as a child, I’ve added a few resources I’ve picked up more recently and used with my own children. As the Fourth of July approaches, maybe these can be of interest to story-oriented children like me. I know, it’s summer, . . . but stories don’t really count as school, right? Right.

1. Ben and Me by Robert Lawson.

This entertaining book tells about the life of Benjamin Franklin, as told by a young mouse who (in this story) was the real brain behind many of this founding father’s scientific and political contributions. It follows Franklin’s life from the days of Poor Richard’s Almanack, through a few of his inventions / experiments, to his assistance writing the Declaration of Independence, to his ambassadorship to France.

I hate to contradict this post I wrote last year, but I have to say I’d recommend the old Disney short film of the same name over the book, at least for younger children. I’ve only recently read the book, and while it certainly has its merits (like Lawson’s great sense of humor), I’m not sure I would have enjoyed it as much as a child, whereas I watched the movie dozens of times. Fortunately, the latter is relatively faithful to the original, other than the exclusion of the last few chapters (regarding France). I don’t think this is a great loss, however, as these chapters focus more on the mouse and don’t really show much of Franklin. The full video is available for free on YouTube. 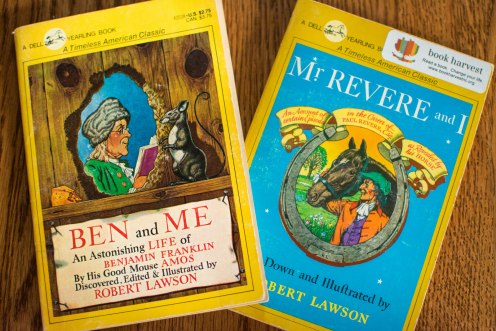 Under this category, I’m also recommending Lawson’s Mr. Revere and I, which is written with a similar concept: it’s the story of Paul Revere as told by his horse. I read this book just for this post and enjoyed it so much it had to be mentioned. (Frankly, the only reason I’m not putting it before Ben and Me is because the movie version of the latter was such an integral part of my childhood.) Of course this story is somewhat fictionalized, mostly in order to make the horse a more central figure, but I would say it is closer to actual history than Lawson’s earlier book. Mr. Revere and I follows Revere’s story from before the Boston Massacre to after his famous ride and his witness of the “shot heard ‘round the world.” I would recommend it for readers about 4th–5th grade and up.

2. Sam the Minuteman by Nathaniel Benchley.

This book is a newer one on my list, one that I didn’t know as a child but have used with my own children. It is an easy-to-read (grades 2–4) book about a boy’s view of the battle of Lexington and Concord. As an easy reader, it obviously doesn’t have a lot of length or detail, but it gives a fair idea of what this first battle of the Revolution might have been like for a child of that time. 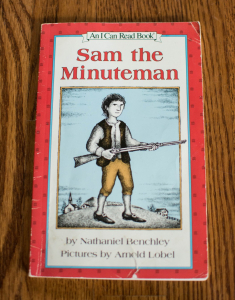 3. Can’t You Make Them Behave, King George? by Jean Fritz.

This is another book more recently brought to my attention, but it has quickly become a favorite. It’s a delightfully told children’s biography of King George III, including his perspective on the American Revolution. Fritz includes plenty of interesting little details about the king as a child as well as an adult, giving a unique insight into his personality and why and how he handled his side of the war. Being a slightly longer book (about 50 pages, including illustrations), I would say it’s best for 3rd–4th grade and up, but it could also work well as a read-aloud for younger grades. 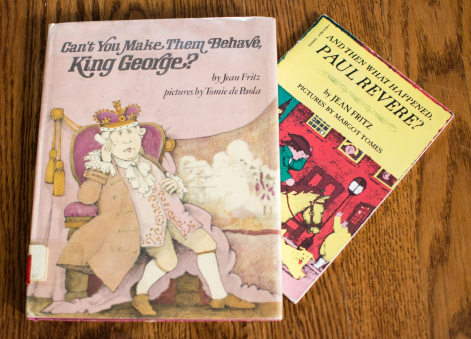 Fritz has written similar biographies of several members of the Revolution as well: Samuel Adams, Patrick Henry, John Hancock, Benjamin Franklin, and Paul Revere are the ones of which I am aware. I have only read the one about Paul Revere, but it is also excellent. Any of these should make for interesting and educational summer reading!

This book is one of my all-time favorites. I read it for the first time around 7th or 8th grade, but it could be manageable for a grade or two younger. It tells the story of a spirited, young Boston colonial who suffers a crippling accident, follows it up with some poor decisions, and is eventually rescued and taken in by members of the Sons of Liberty. Throughout the story, Johnny meets up with leaders of the revolution such as Samuel Adams, John Hancock, and Paul Revere, and becomes involved in important events around Boston: the Boston Tea Party, Revere’s famous ride, and the battle of Lexington and Concord. The author of this book is both quite knowledgeable of her subject (having written a full biography of Paul Revere) and a very engaging writer, so this novel is the perfect blend of entertaining fiction and historical accuracy. 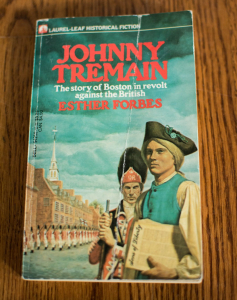 Adventures in Odyssey was one of the most influential storytelling sources of my childhood, and the historical episodes were no exception. Episode #33, “The Day Independence Came,” brings one young man back to 1776 in a brief run-in with Nathan Hale, and then puts him in Philadelphia just as the Continental Congress is having its final debates on the Declaration of Independence. Episode #197, “The Midnight Ride,” features (of course) my favorite revolutionary, Paul Revere. This episode takes a look at Longfellow’s famous poem, explaining the story in more detail and correcting historical inaccuracies. These two episodes, especially the second, were a key part of my interest in and knowledge of the Revolution. More recently, Adventures in Odyssey has also taken a look at African-American contributions to the Revolutionary War in episodes #508-509, “The American Revelation.” I am not familiar with more recent seasons of Adventures in Odyssey (though I may have heard these episodes once), but these look great according to reviews. Episodes can be purchased online for $2 each.

And there you have it! Here’s wishing you all a delightful, and perhaps moderately educational, summer.

P.S. Have younger girls? They may be also interested in the American Girl Felicity series by Valerie Tripp about a young girl growing up in Williamsburg during the American Revolution.