Jim is an attorney and litigator who has helped HSLDA win a number of landmark cases establishing and protecting homeschool freedom.

Why You Want Jim for Your Event

State of the Homeschooling Nation Address

A serious but entertaining look at HSLDA’s recent cases and why they are important to you and your homeschool. You’ll want to hear about the Case of the Miscreated Court, the Case of the Rotten Big Apple, and the Case of the Caseworker’s Monumental Miscalculation. With over 15 years’ experience representing homeschooling families around the country, Jim has a unique, up-close perspective on trends, emerging issues, and what the future holds for homeschool freedom. BOOK THIS SESSION
30–45 minutes
General Session Workshop Keynote
Encouragement Legal Legislative All New Homeschoolers Veteran Homeschoolers Support Group Leaders

Why We Need a Parental Rights Amendment

Homeschooling freedom stands on two essential pillars of freedom: the right of parents to direct the upbringing, education, and care of their children, and the free exercise of religion. Yet only one of these freedoms—religious liberty—is explicitly guaranteed in the United States Constitution, and both freedoms are under attack. Jim recently became president of ParentalRights.org after its founder (and Jim’s mentor) Michael Farris moved to Alliance Defending Freedom in order to focus more exclusively on religious freedom. Jim has taken up the challenge of explicitly including parental rights in the Constitution. HSLDA and ParentalRights.org believe children are best served when parents are empowered to act in their children’s best interests without undue interference from the state. Come and hear about what it takes to change the Constitution—and how you can help. BOOK THIS SESSION
30–45 minutes
General Session Workshop Keynote
Parenting Legal Legislative Political Parental Rights All New Homeschoolers Veteran Homeschoolers Parents Support Group Leaders

Note to Self: The Vital Role of Homeschooling Dads

Are you a homeschooling dad like I am? Do you need an occasional booster shot like I do? Come let us reason together, encourage one another, bear each other’s burdens, and leave refreshed to carry out our vital role. BOOK THIS SESSION
30–45 minutes
General Session Workshop
Encouragement Parenting Spiritual Veteran Homeschoolers Fathers

The Prodigal Son, the Forgiving Father, and the Power of Beholding

We homeschooling parents invest a lot of ourselves in our children. When one of them strays, it is a painful, prayerful time. As one who has wandered himself, and one who has shepherded seven children through sometimes challenging times, Jim has a word of encouragement, reconciliation, and hope for walking through troubled times. BOOK THIS SESSION
30–45 minutes
General Session Workshop
Encouragement Parenting Spiritual Veteran Homeschoolers Parents Support Group Leaders

Since joining HSLDA to lead the litigation team in 2001, Jim has represented homeschooling families in a wide range of challenging situations and has set precedents that have expanded freedom for the homeschool community. Under Jim’s leadership, HSLDA’s 4th Amendment litigation work has changed the way three states (North Carolina, Pennsylvania, and New Mexico) approach social services investigations. In Wilson v. Russo, HSLDA won a $700,000 settlement for our client, a single parent whose children were seized by a rogue child protective services investigator.

Jim was instrumental in litigating the 2008 California case Jonathan L., in which a state appellate court reversed its previous ruling that homeschooling was illegal. This put an end to years of controversy over the legal status of homeschooling in California and set a precedent that affects other states as well.

In addition to serving as HSLDA’s Vice President of Litigation and Development and penning many of the most popular articles in HSLDA’s Home School Court Report magazine, Jim serves as the president of ParentalRights.org. Before coming to HSLDA, Jim represented numerous right-to-life groups in campaign finance cases and clerked for an appellate court in Oregon. He graduated with highest honors from Regent University School of Law in 1996. Jim is a veteran of the U.S. Navy and served on active duty in Operation Desert Storm.

Jim and his wife Debbie live in Winchester, Virginia. They have seven children and one granddaughter. The Masons have homeschooled all of their children: six have graduated and one is still being taught at home. In his spare time, Jim is an avid birdwatcher, waffle connoisseur, and abstract art fan.
HI RES PHOTO 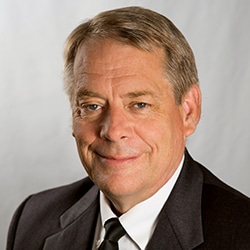 Tell us a few details and we can help you pick the best speaker for your event. — Chloe Powers, HSLDA Event Coordinator