After years of struggling to stay engaged in a traditional school setting, this teen turned to homeschooling as a way of stretching himself academically.

Fifteen-year-old Sam Krug insists it took a while before he learned to enjoy math.

It wasn’t until the fourth grade that he began delving deeper into the world of numbers on his own, performing tasks like manipulating a theoretical four-dimensional object—known as a tesseract—just for fun. That was about the same time he tested into algebra.

“I developed a fascination with problem solving and patterns,” Sam recalled during a recent conversation. “It seemed like a game that I could figure out.”

The problem, his mother Alli recounted, was that aside from his teachers and friends, there was little else about school Sam liked. It was not a place of engagement in learning.

Sam started first grade in a public school in Washington state, where his father Dave was stationed by the US Navy.

Alli remembers that Sam’s structured educational experience soon became quite unlike the free-flowing learning the two of them enjoyed in his preschool years.

At that time, Dave was stationed in Hawaii, where Alli said it was easy to appreciate “just being in the world with the kids.”

“We visited the state entomologist to talk about insects,” she recalled. “We visited museums and tide pools. We mountain biked through muddy tank trails on the Marine Corps base on the way to the dentist. We lived a very free and engaged life.”

The regimentation of traditional education, however, soon left Sam disengaged.

“I was very bored in school,” he admitted. “My brain just shuts down. I couldn’t stand sitting in a class for six hours.”

Alli explained: “If he has meaningless work in front of him, his brain will go feed on something else. He is off in his own little world.” 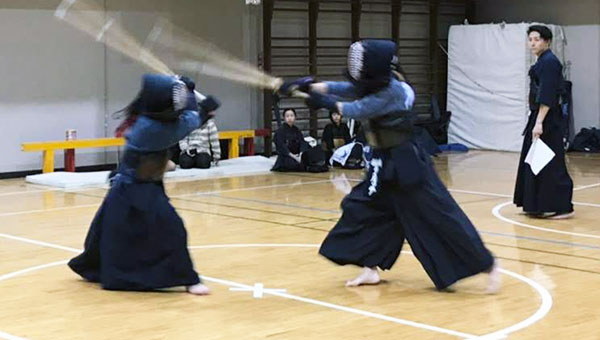 Sam Krug trains in the art of Japanese sword-fighting as part of his homeschool program.

Nevertheless, Alli and Dave decided to work within the system. Alli volunteered in Sam’s school and tried to arrange accommodations that would help keep her son more challenged. Teachers agreed that Sam could skip the easier problems if he showed he had mastered the hardest problems.

At home, Sam worked on projects that held his interest. He coded modifications for the video game Minecraft, built 3D structures with 3,000 dominoes, took a pre-algebra course from the Art of Problem Solving, and ventured into math competitions.

At the end of the fourth grade, in recognition of his advanced academic skills, the school recommended that he be advanced a year ahead, into the sixth grade.

As Sam entered seventh grade, the Navy moved the Krug family to Japan. And though Alli recalls being excited at the opportunity for her two sons to sample a new home and culture, once they settled in, Sam again found himself somewhat stifled by the program at the on-base middle school. Every year, a standout teacher made it possible to find a path toward differentiated instruction, which helped the family manage to strike a balance.

Alli believes it is important for gifted students to take responsibility for their own learning, advocate for their needs, and find ways to modify or stretch their assignments to imbue them with additional meaning.

As she sees it, parents should be involved and engaged with the school from the outset, developing a productive relationship that conveys mutual respect. This approach is very important for when the time comes to have a substantive discussion about policy changes that can open doors for gifted students to continue learning. Alli feels the school climate, set by its leadership up the chain of command, should try to strike a collaborative approach that ensures academic growth for all students, just as accommodations are made for those with learning challenges.

As Sam put it in his matter-of-fact way: “There’s a lot of wasted time in our school system that could probably be eliminated.” 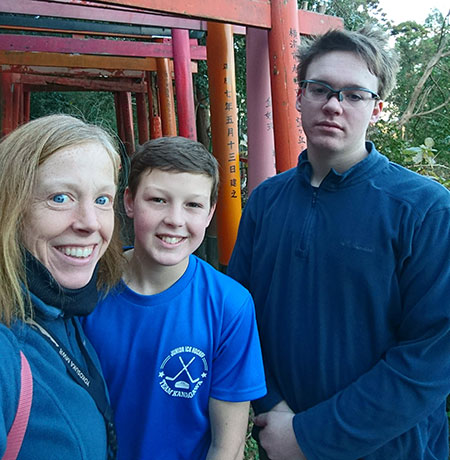 Alli Krug pauses for a selfie with her sons Ben and Sam during a hike in Japan.

By high school, Alli and Dave knew they had to do something different for Sam. Through a remarkable collaboration with the principal at the high school operated by the Department of Defense, they were able to work out an accommodation, guided by existing policies regarding assigning credit for courses taken by accredited programs.

Sam began a hybrid program, attending some classes at the base school but then augmenting those with homeschool courses he and his parents selected.

“It was one of the first times he was really stretched,” recalled Alli. She said she feels the experience was good for Sam, because he could deal with most of these academic challenges within the flexible and familiar environs of homeschooling.

She added: “I think it’s important to experiment with the outer bounds of what your kids can do—especially in the safety of their own home. Instead of feeling frustrated and powerless, he was helping find his own way forward and charting a course that is not very typical, but which allowed him the freedom to learn at his own pace, and across a breadth of subjects and activities that is not really feasible on campus.” 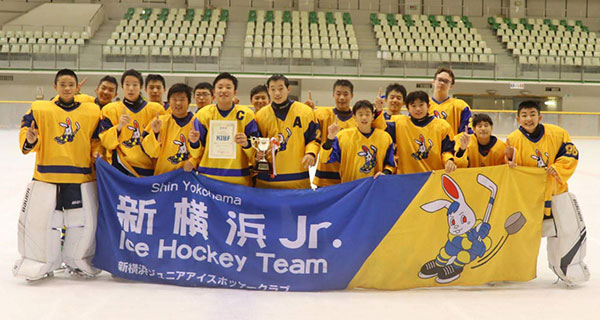 An added benefit Alli said has emerged from Sam being given more say in his education is that he seems more confident, more communicative, and more engaged with others.

For example, though Sam still loves to withdraw to his room to ponder his clipboard of complex math problems, he has also recruited four other peers to participate in the Mathematical Association of America’s student competitions, AMC 10 and 12.

“The neat thing about these five kids,” said Alli, “is that they were meeting on sunny Friday afternoons in the library—to do math problems. It was completely self-organized. They actually continue to meet via videoconference each week and explore unusual math concepts together.”

Sam exulted that, in various tournaments, he and his fellow competitors all scored average or better. “That’s with no experience,” he added.

Sam has also developed into an advocate for students like himself, speaking out at school advisory council meetings and urging administrators to find new ways to encourage learning.

As Sam explained: “There are plenty of intelligent people at my school who also struggle with being engaged.”

Thanks to her son, Alli said, these gifted students’ voices are now being heard. Along with Sam, she added, their message to policy makers is based on a simple but powerful reminder: “They help them remember what it’s like to be a young student with an appetite for knowledge.”

Photos courtesy of the family.